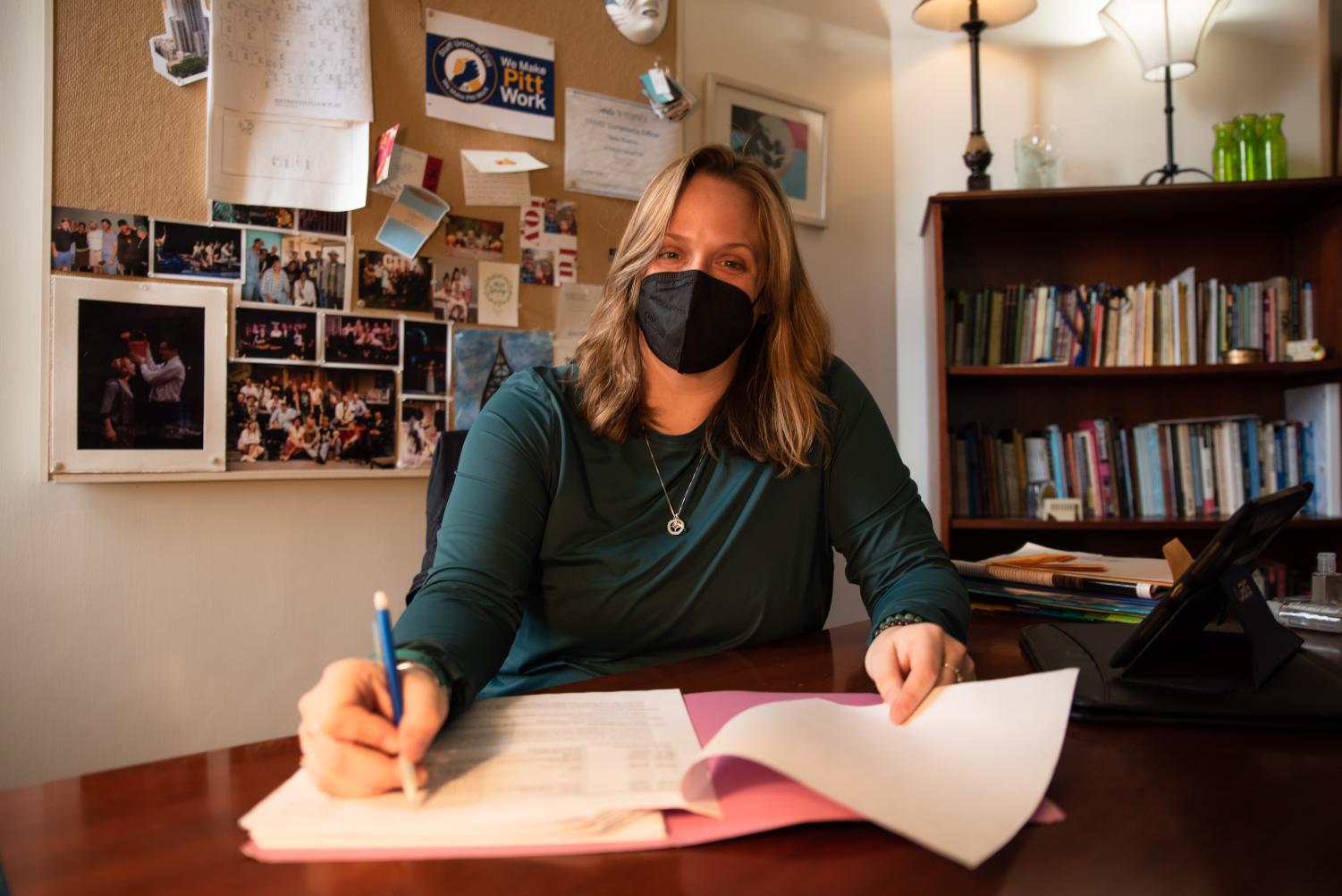 Ashley Martin: Unafraid to do theater

Sitting in the back of Charity Randall Theatre, Ashley Martin took a look at her planner. While completely jampacked, it was also meticulously organized and covered just about every aspect of production that Pitt’s theater arts department needs to thrive.

“My job entails all these wild, different things that bring everybody together to make theater,” Martin said. “My students will comment that the calendar gives them anxiety when they see what I do.”

As the department’s operations manager, Martin doesn’t just have one or two responsibilities — she has a hand in almost everything. Formerly a stage manager with the City Theatre Company and Pittsburgh Public Theater, her role in day-to-day operations has expanded due to her experience and dedication.

Annmarie Duggan, Martin’s former professor and now colleague, said not much has changed since her time as a theater arts student in 2006 when it comes to her passion.

“Ashley and I go way back, she was actually in my first-ever stage management class at Pitt,” Duggan said. “Ashley was always a rock star even as a student … she was willing to learn, she was unafraid to do theater. Sometimes you have to be unafraid because we all make mistakes, there’s no way to do it perfectly when you’re just learning.”

That mindset in a competitive and constantly changing theater arts industry is what has allowed Martin to work in theaters from Pittsburgh to South Carolina. When the operations manager position opened at Pitt in 2017, Duggan said Martin’s name jumped out among the pool of applicants, and she ended up being perfect for the role.

“When this job came up a few years back, Ashley applied, and I was extremely excited,” Duggan said. “She is a bulldog when it comes to getting things done and making sure they’re done right. … She is one of the most positive forces in the theater department that we have, and we would not be the same without her.”

For Martin, an average day includes meeting with a construction team about building a ramp for the stage, fixing one of many leaks around the theater and meeting with other operations managers to discuss logistical updates and collaborations. The rest of her day is spent in the theater, where she oversees everything from stage design to technical support, while managing budgets and licensing new shows.

Despite having these other tasks, Martin’s most pressing priority was prepping for the production of William Finn and James Lapine’s “A New Brain,” which opened Feb. 23 and ran until the following weekend. She said because of all the adjustments the theater department has made since the beginning of the COVID-19 pandemic, the musical held extra weight.

“This one is pretty important because we weren’t sure we would be able to do a musical in this slot,” Martin said. “Because of COVID, because of safety concerns, the delay to the start of the semester delayed us in terms of rehearsal … but they’re doing it, it’s great, I’m just really excited for this one.”

While the pandemic negatively impacted countless businesses and industries, theaters were one of the sectors hit hardest. According to Martin, the arts rely on their performers and crew being able to interact closely and in person in front of packed, live audiences.

For Martin and the entire department, reeling without any production to work on wasn’t an option. Their production of “Head Over Heels” was canceled months into the building of stages, so the crew got creative. They took advantage of Zoom and virtual communication to produce a digital production of “She Kills Monsters.”

“It created an opportunity for us to revisit a show some of us were familiar with, and put it in Zoom boxes,” Martin said. “We created something that was wildly different and exciting, and we worked on it all summer. We had something to do — theater people are not good if they don’t have something to do.”

Perhaps the most devastating impact of the pandemic was recent budget cuts coming from the University. According to Martin, the theater program’s production budget was reduced about 50%. Pitt scenic designer Gianni Downs said Martin has been instrumental in finding ways to navigate and improvise on the decreased budget.

“We have tightened our belts all over, which means that we may not have the number of costumes we’ve had in the past or the size of sets that we’ve had in the past,” Downs said. “Because of that, we’ve been planning ahead, and Ashley is instrumental in that too. She offers up scripts for us to think about for the future that are appropriate for our budget levels.”

Budget cuts have caused the department to hold off on theater improvements, such as new lights, as well as cutting back on props or designs deemed unnecessary. Despite all the challenges and her theater needing to do “less with less,” Martin felt they’ve never been more creative.

“Students have to get crafty,” Martin said. “They have to get creative about where they want to put the focus and energy of their work and what priorities take place … in retrospect, I’m really proud, but it was challenging in the beginning.”

Martin’s role in production and upkeep for the theater department is a major part of her day-to-day activity, but it’s her role as a student advocate that has set her apart in the eyes of students and faculty.

“Right now we have two students who are working as COVID safety officers with various Broadway shows, Kevin McConville and Shane Smay,” Martin said. “Laura Valenti is assisting scenic designer Jason Ardizzone-West as his model builder in his studio. She did one of my favorite scenic designs in Little Shop of Horrors … I’m really impressed by all the work that she’s been doing, she stands out as one who has been consistently working and growing.”

Valenti is one of many Pitt theater arts alumni who have found success in the industry, immediately finding her footing as a scenic designer after she graduated in 2018. She praised Martin as a dedicated leader who helped her see numerous post-graduate opportunities in set design spanning from New York to California.

“She was always a very strong mentor,” Valenti said. “Especially through my senior year trying to apply for post-graduation jobs and internships and reading all of my resumés and cover letters. Ashley was just a really great resource for me in that year.”

Along with scenic design, Valenti has also found a passion in working with younger students and teaching technical theater, which focuses on everything that goes into a production besides acting. She discovered the niche by watching Martin interact with local high school students.

Even among faculty, Duggan voiced similar sentiments about Martin’s ability to resonate with people, mentioning how she was always available for support, especially during the pandemic.

“I would not have survived without Ashley, she was a touchstone for me,” Duggan said. “She was somebody that I could call, and we would walk through all the possible scenarios of the day and come up with what was going to keep the students as safe but give them as many opportunities as possible.”

Looking back on her time with the department, Martin said her role is easily replaceable — but her contributions and students' successes is something she will look back on fondly.

“I mean, if it wasn’t me, it would be somebody else,” Martin said. “But I just am very passionate about what we do here. I think that there’s a lot of opportunities that students get because everybody cares. People are everywhere doing things, you know I’m here cheerleading you on from afar … There is a strange Pitt connection almost everywhere that you look, almost like we’re sort of taking over.”