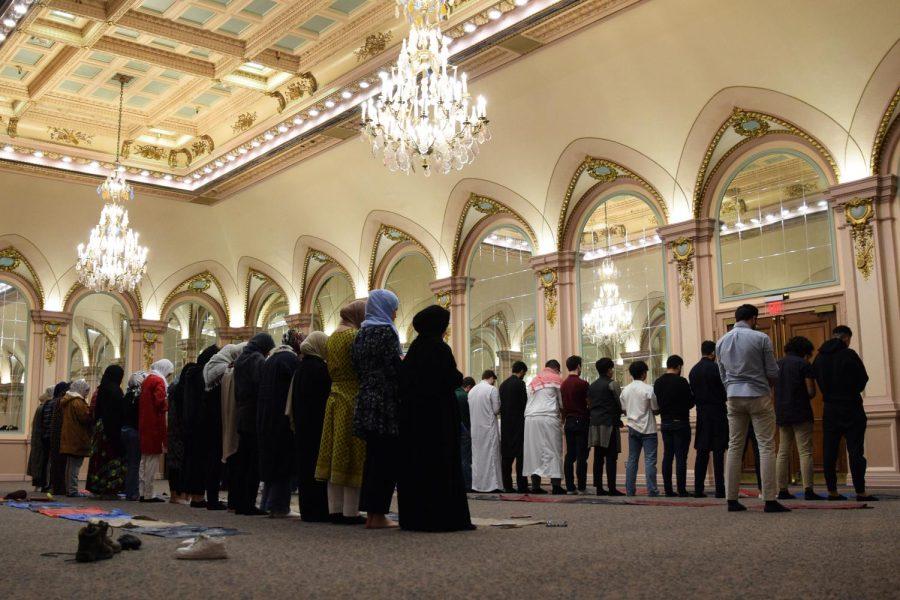 A monthlong journey of self-reflection, community and discipline for the Muslim community, both at Pitt and around the world, began this year on April 2.

Zeyad Amr, a first-year political science major, said Ramadan is a time for Muslims to strive for a “collective goodness.”

“During Ramadan, everyone around you is trying to be the best version of themselves,” Amr said. “It’s an energy that’s contagious, and it’s really exciting.”

Ramadan, the ninth and holiest month of the Islamic calendar, is observed through a 30-day period of fasting from dawn until dusk. Pitt’s Muslim Student Association runs twice-weekly iftars at sundown, which are the meals held each evening to mark the end of the daily fast. Amr said these meals are important both to break the fast and foster the Muslim community at Pitt.

“A big part of Ramadan is the sense of community,” Amr said. “We know sometimes it can be a little bit lonely on campus, and we figured it would be a good idea to bring everybody together to break our fast together.”

The iftar meals are almost entirely funded by donations and feed about 80 people each night. Weeam Boumaza, a first-year political science major, said philanthropic endeavors are also a core aspect of Ramadan.

“Ramadan is a month that encourages service, so a lot of the food we receive for iftars is donated or the costs are covered,” Boumaza said. “One restaurant that provides a lot of our food is Salem’s Market and Grill, a halal restaurant in the Strip District.”

For nights when there are no communal iftars, Boumaza said Pitt’s dining services have exceeded her expectations this month. The Eatery is providing packaged halal food for students to take for suhoor, which is the meal eaten before fasting begins at dawn, along with providing halal food each day for iftar.

“The dining hall staff in particular have been very responsive,”  Boumaza said. “When we went to them about the lack of options for halal food, they fixed it almost immediately and added more options for meat and protein.”

The University is allowing students to enter and re-enter the dining hall more than once per hour for the five daily prayers, according to Amr.

“We conduct four daily prayers in the William Pitt Union, and we go to the Market to eat a few dates and drink milk during each prayer,” Amr said. “The University has been really understanding that sometimes we will need to go into the dining hall more than once an hour, and they’ve allowed us to do so using ‘prayer passes.’”

Many Muslim students cite Ramadan as their favorite time of the year because of the opportunities for growth that it encourages. Asma Qutyan, a junior psychology major, said she was actively anticipating the beginning of Ramadan.

“I couldn’t wait for this month to come so that I could go back to God,” Qutyan said.

Muslims often see Ramadan as a special time to re-evaluate what they view as important in the world, and Amr said it helps him to better understand the world.

“A lot of people who don’t experience Ramadan might see this month as dreary, where you’re starving yourself and you have to abstain from different things. But for me, this is a month I look forward to,” Amr said. “In the absence of worldly distractions, you begin to really understand what our purpose as humans is.”

Although the most commonly known type of fasting that occurs during Ramadan is abstinence from food and drink, Qutyan said it’s equally as important for Muslims to partake in self-reflection and improvement. She added that simply abstaining from eating is not the sole purpose of the month.

“When you’re fasting you’re supposed to not commit any type of sin — you’re supposed to be focused on being the best you can be,” Qutyan said. “If you’re still doing the negative things you’ve been doing outside of Ramadan, what does God need your fast for? It’s about gaining consciousness and recognizing God being with you.”

Boumaza said she tries to do as much intentional good as possible during Ramadan.

“It’s a month of discipline and self re-evaluation, and for me it’s about focusing on and trying to be the best person I possibly can be,” Boumaza said. “It’s about fasting from all distractions, whether that be food or things like gossip.”

Qutyan is also abstaining from social media, which she said has elevated her Ramadan experience.

“I’m taking a social media break as well this month, which has been such a relief and a breath of fresh air,” Qutyan said. “I’ve been able to focus on being a good person and trying to be a better Muslim.”

Qutyan emphasized love for the community that is fostered and grown throughout the month, and said events like iftars are planned so that every person feels they are part of the community.

“There’s a Muslim Student Association girls-only Whatsapp groupchat, and people use it to plan where they’ll go to break their fasts together,” Qutyan said. “If some people don’t have places to go, other members will invite them over so they’re not alone. To me, that’s what Ramadan is about — the community and the encouragement that we give to each other.”