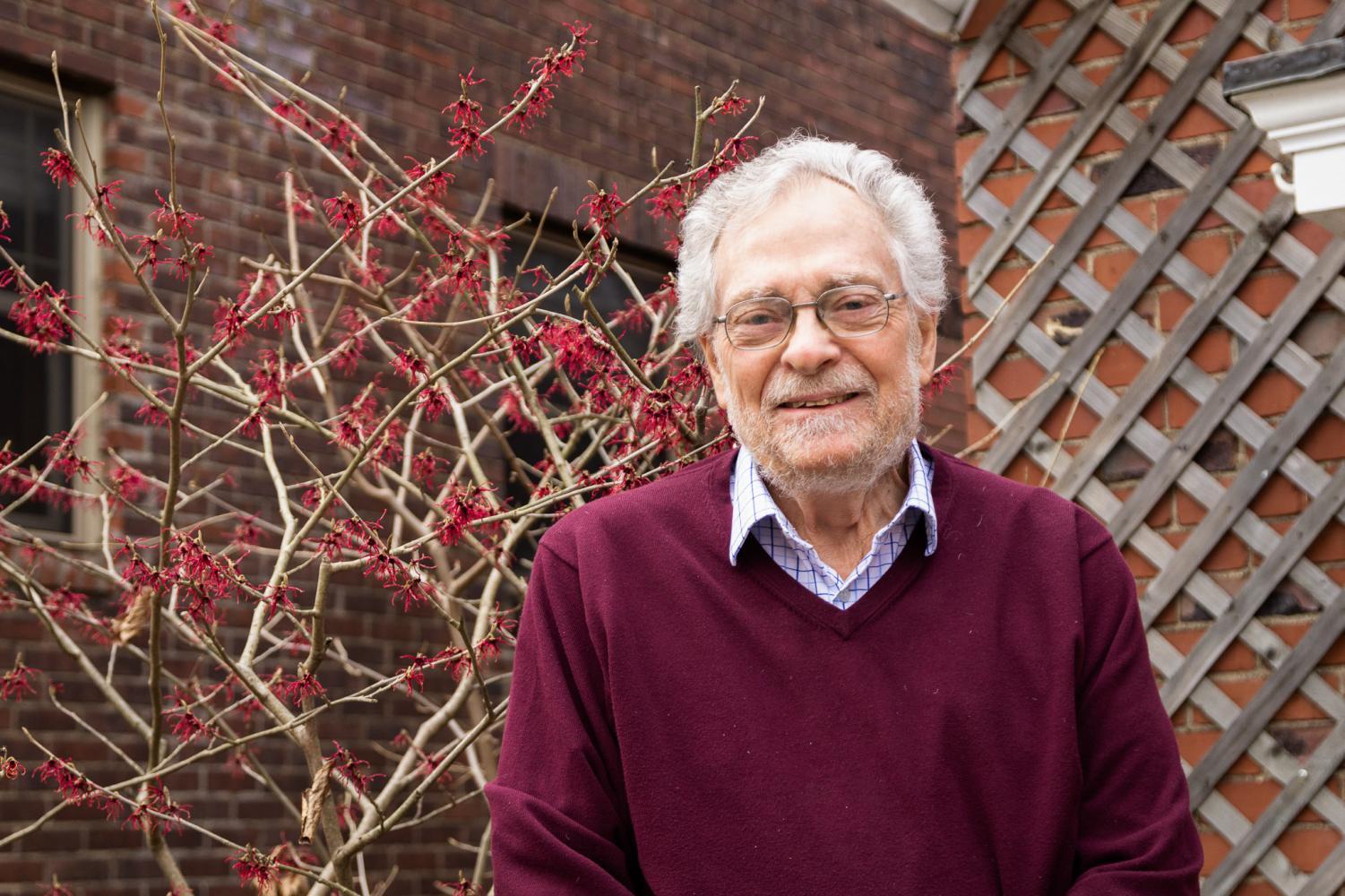 Phil Wion: A labor of love

The first time Pitt faculty voted to unionize, there was no victory celebration. Instead, many organizers feared that the supposed win threatened to destroy union organizing efforts at universities across the country.

Phil Wion, the then-president of Pitt’s faculty union drive, grimaced as he recalled the election.

It was 1987, and a state labor board decision had left Pitt’s union leaders reeling.

The hearing examiner declared that all full-time faculty at Pitt were “managers” and therefore ineligible to unionize, whittling down a potential faculty union to only part-time professors months before University faculty were set to vote on the union question. The decision came on the heels of a similar ruling by the Supreme Court, which restricted faculty union eligibility at all of the nation’s private universities.

When election day arrived in May, part-time faculty picked up the baton — 54% of them ultimately voted to join a union.

But the vote tally put Wion and other union leaders in a pickle. If they accepted the win after more than a decade of campaigning, it would set a disastrous legal precedent nationwide — no public sector faculty union would be able to include full-time faculty, shutting out most of the workers a union aimed to help.

As the results trickled in, Wion told himself to focus on the greater good. With the specter of several national labor unions bearing down on him, he steeled himself, called his attorneys and swiftly filed an appeal to nullify the election’s results. All these years later, Wion said the wounds are still raw.

“It was really painful,” Wion said, shaking his head. “But not unanticipated. We knew that this was a bad ruling and it had to be overruled because so much was riding on it.”

Few members of the public know that the 1987 union election ever happened, but most professors within the Pitt faculty union orbit know Wion’s name. He spent 12 years at the helm of Pitt’s faculty unionization efforts — from 1980 to 1992 — weathering blow after blow from the University administration and conservative politicians who wanted to quash collective bargaining.

The bookish 80-year-old now lives a relatively quiet life with his wife Marianne in Squirrel Hill. Since retiring from teaching in 2009, he’s joined a symphonic band and tries to spend more time with his family.

But Pitt faculty’s resounding union win in October lured Wion back into his old world.

I first met Wion at an electric victory party outside United Steelworkers headquarters that same month. Sporting glasses, a black jacket and white hair, he sat off to the side, holding his cane. As the celebratory speeches wound down, Wion said the win was “thrilling.”

On an icy Saturday morning in February, we dug deeper, and Wion reflected on more than two decades of campaigning. His assiduous efforts fell short across several drives, but they laid the groundwork for the most recent union campaign, which culminated in 71% of Pitt faculty voting for unionization.

For Wion, a faculty union is all about “solidarity” — bridging divides between professors across ranks and departments.

“It’s often about the haves and have-nots,” Wion said. “The way you see things often depends on where you sit, what your role is.”

That level of social awareness was inculcated in Wion early on. His dad taught a high school civics class. And his family members had strong political convictions — they were all New Deal Democrats among a sea of Republicans in his hometown of Bellefonte, Pennsylvania, located about 20 minutes northeast of State College.

Ann Wion, his sister, said some of that disagreement among peers likely helped propel her brother’s union activism.

“One of the things I think you learn when you grow up in a small town … you're going to have friends and neighbors that you might have different views from politically,” his sister said. “But that doesn't mean you can't be friends and you can't get along and that you don't share a lot in common.”

Wion quickly left his sleepy hometown to achieve greater things. After becoming valedictorian of his high school class, he got his bachelor’s in English at Swarthmore. He finished his doctorate in English at Yale in 1967 and got a job as an English professor at Pitt that same year, earning tenure shortly afterward.

Tenure gave Wion a certain immunity to the wrath of University administrators that non-tenured faculty did not enjoy, and saw it as his responsibility to advocate for the “have-nots.” He cut his teeth as a union organizer in the early ‘70s, when Pitt faculty — citing issues with pay, job security and administrative transparency — followed other universities to begin their first union drive.

Wion said the effort was modest — about 10 to 12 organizers, largely from the humanities and social sciences, would meet for beers in the back of what’s now called Hemingway’s Cafe to strategize on campaign efforts. Decades later, members of Pitt’s nascent organizing team would hold secret meetings in the back of a Panera.

As a young organizer, Wion got a lot of doors slammed in his face. There was plenty of open hostility toward unions, he said, especially among faculty in professional schools, such as law, medicine and business. One scene with a senior faculty member in the business school sticks out.

“When I went to his office, he gestured to me to sit down and the seat in front of his desk was obviously deliberately low. So I was sitting very low, having to look up to him. And I figured that was just a little mind game that he played on people,” Wion said. “He was not sympathetic to the union.”

It was perhaps symbolic of the sentiment union organizers had to contend with across all three union drives — what Wion described as an “attitude of elite superiority” among professors  — and might have made the difference between winning and losing the first union election.

The 1976 election pitted three unions against each other — the American Association of University Professionals, the American Federation of Teachers and the National Education Association — making the process somewhat “chaotic,” Wion said. All three unions had different priorities — the AAUP was made up of university faculty, and prioritized issues such as academic freedom and shared governance, whereas the AFT and NEA were more traditional labor unions that represented K-12 teachers and blue-collar workers.

When the AFT won a plurality of votes among the three, there had to be a runoff election between the AFT and “no union.” But the AFT failed to gather enough support, in part because faculty who had supported the AAUP didn’t like the optics of pairing with a more traditional labor union, Wion said.

“[We had] difficulty in persuading our colleagues across the University that we had common interests, whereas the administration emphasized divide and conquer … potential conflicts of interest between different groups — tenured- and non tenure-stream, full- and part-time, main campus and regional campus, Art and Sciences versus professional school,” Wion said.

University administrators and the national political environment only grew more antagonistic toward union efforts as the conservative movement reached its zenith across the country.

Ronald Reagan’s win in the 1980 presidential election marked the beginning of a slew of anti-union initiatives at the federal level. In a move that rattled labor leaders nationwide, Reagan in 1981 fired more than 11,000 air traffic controllers who had decided to go on strike, slapping them with a lifetime ban on federal service.

“The victory of Reagan in the 1980 election was a real turning point,” Wion said. “That’s where the idea of interdependence and supporting each other got trashed.”

At the time, conservative officials played hardball with unions, and their sentiments trickled down to the local level, infiltrating organizations from steel mills to universities. Pitt’s administration followed the tide of public opinion.

“​​We can beat their union now or beat them later,” Pitt’s lawyers said to the press in 1985, a stark contrast to the most recent faculty union drive where administrators stayed publicly neutral toward the campaign.

By 1980, Wion had ascended to president of the faculty union drive. Throughout the ‘80s and early ‘90s, Wion had to be an academic with the instincts of a street fighter. He shepherded thousands of faculty through union elections and engaged in bitter, protracted legal battles with the University.

“It was really rough,” Wion said.

Another pivotal moment was the Yeshiva decision of 1980, in which the U.S. Supreme Court ruled that full-time professors were “managers” and couldn’t be included in private-sector faculty unions — a death blow to labor organizing at universities.

Pitt was a test case for that ruling in the public sector, and Wion helped steer University faculty from the brink of disaster. After the state labor board handed down a 1987 ruling similar to the Yeshiva decision for Pitt’s union election that same year — excluding full-time faculty from the potential bargaining unit and forcing an election for part-time professors — Wion and other union leaders successfully appealed the ruling to reinstate full-time faculty, leading to another election in 1991.

In defeating the Yeshiva precedent in the public sector, Wion enjoyed a brief moment of fame. He and other organizers at Pitt graced the cover of the Chronicle of Higher Education, and labor activists nationwide came out of the woodwork to congratulate him.

When Pitt held another union election in 1991, other issues surfaced that doomed the vote. Across the state in Philadelphia, unionized professors at Temple University were in the midst of a bitter strike. And, in a last ditch effort to appease faculty, Pitt’s chancellor at the time, Wesley Posvar, issued a blanket 7.5% raise to all faculty.

“It looked pretty clear to us that that was an attempt to thwart our organizing efforts,” Wion said.

Five years later, Wion and other union organizers pulled the plug on a third union drive before reaching an election, suspecting they wouldn’t get a majority vote.

Pitt’s era of faculty union efforts had burned bright, but fizzled — until campaigning picked up again a few years ago.

Tyler Bickford, a prominent union organizer in the most recent drive that began officially in 2016, said Wion’s knowledge and insights were “really important” for the campaign.

“Phil has been a real inspiration and mentor to me,” Bickford said. “There are a lot of people who've been at Pitt for a long time and … who were excited to vote for a second or in some cases, even third time for a union.”

Bickford was the first to contact Wion after the union became official in October, and Wion promptly leapt for joy upon seeing the email notification. Asked what made the difference during the most recent drive, Wion said the answer is simple — times have changed.

“Right now, I think, there’s an upswing for organized labor,” Wion said. “Young people are quitting their jobs if they don’t have a decent living wage.”

At the October victory party, Wion said the win brought back a particular memory — when faculty union organizers lost the election in 1991, the drive’s vice president, who had campaigned in Chicago, quoted one of the city’s union leaders.

He smiled, then added that “this time around, faculty at Pitt were ready for reform … I’m glad I’m still around to see it, to celebrate it.”