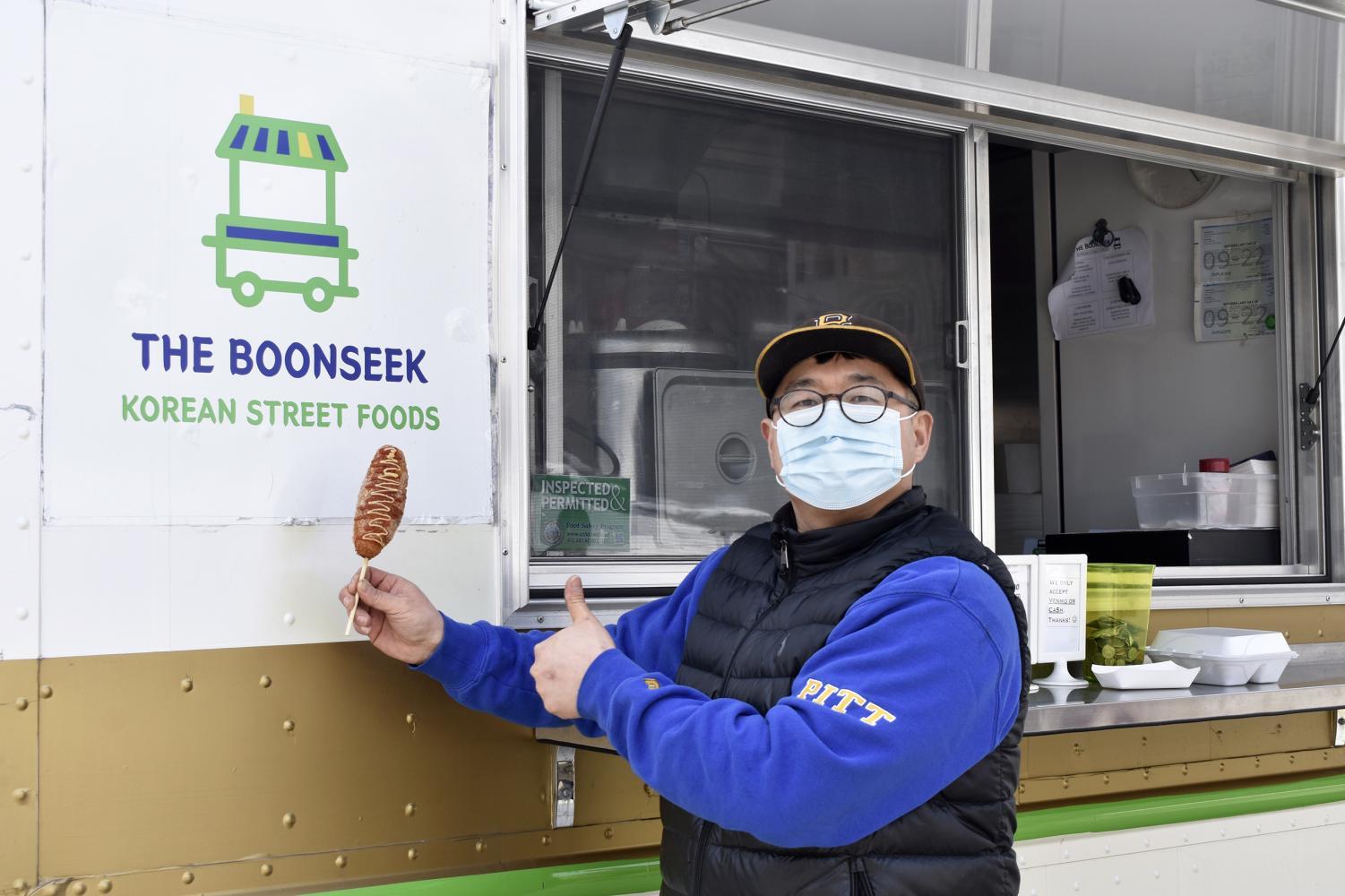 When DongJo Kim came from South Korea to the United States in order to attend the University of Utah, he couldn’t cook so much as a scrambled egg.

Within two years, Kim was drawing up plans to open up his own restaurant. Now, nearly four years later, he has more than 7,000 Instagram followers jumping at the chance to eat his food.

Kim brought a bite of Korea to Allegheny County through his food in October 2020 with an unconventional take on an American classic — the corndog.

Although many who taste Kim’s food would tell you his food truck, named The BoonSeek, was destined to be a success, Kim thought otherwise when he first opened for business during the height of the COVID-19 pandemic.

After building his business for the past two years, loyal customers gather in huge lines in front of the Soldiers & Sailors Memorial Hall and Museum to eat his food. The menu features three variations of corn dogs, as well as traditional Korean street food.

Kim majored in chemistry in college, but instead of studying the periodic table, he was far more interested in honing his newfound passion for cooking. Kim said he was motivated to cook after longing for the food he grew up with.

“You know I first started cooking because it was cheaper, and then I started missing the food from back home,” Kim said. “I used to try to watch videos to learn Korean cooking and I began to like cooking more and more.”

Kim met his wife, SuOk Lim, while in college and moved to Pittsburgh to support her while she studied at Pitt to obtain her master’s degree in social work. During this time, Kim said he continued creating his own recipes while working at a Korean restaurant, and began dreaming of opening up his own restaurant.

“I started working in a Korean restaurant in Pittsburgh, and I had been cooking for some time, so I wanted to open up my own restaurant so I could help introduce more people to Korean food,” Kim said.

Kim decided to take a leap of faith, and attempted to open up his own restaurant in December 2019. The pandemic hit soon after and Kim said it was “painful” when he had to scrap his plans.

“It was a little painful when the pandemic hit because it was obviously a block for my goals,” Kim said. “I was not very optimistic because the pandemic started, and I saw so many restaurants and businesses go out of business because all the people stopped eating outside and were so afraid, so I thought it was not a good time to open up a restaurant.”

For a couple of months, Kim said he felt completely “lost.” His well-laid plans and dreams seemed to be at risk as he watched other restaurants fail during the pandemic.

“When the pandemic started and I saw the lockdowns, I felt really lost and I didn’t know what to do anymore,” Kim said. “I knew I couldn’t open up a restaurant then but I didn’t want to give up on my dream.”

Lim said she saw her husband lose hope, and decided she would help him beat the odds, guiding him toward opening up a food truck. Lim said she thought a food truck would be a better start for him at that time since it seemed to be a smaller risk.

“I felt really bad for him because he had worked so hard to get his restaurant and the pandemic kind of ruined so much of that hope, but I didn’t want him to give up, and so I tried thinking of ways to help him,” Lim said. “I thought a food truck would be easier to start because people still need food, and it was kind of like curbside pickup so it would be good for the pandemic, so I told him to try to start a food truck.”

Lim said she saw a newly invigorated spirit in Kim as he began recipe testing and preparing for his food truck to open.

“He started getting excited about the food truck idea, and I saw a new change in him,” Lim said. “He began to have more hope and started creating new recipes and ideas that would be better for a food truck.”

Kim said he was grateful for his wife’s steadfast belief in his success. He fed off her strength to conquer his fears, and ultimately spent his savings on his food truck.

“My wife helped me a lot, and because of the pandemic I couldn’t really afford to hire people, and so she offered to help me start it and it made me feel good to see how she believed in me,” Kim said.

Despite the pandemic forcing many restaurants to close, Kim opened up the window to his food truck in March 2020 during the height of lockdowns. He set up his truck in front of Lawrenceville’s 11th Hour Brewing Company, where he awaited his first customers. Kim said the first few hours were agonizing as he waited for somebody to take a chance and try his food.

“I was really worried when I first opened because I was afraid no one would come, especially because there were no students, and while I waited I kept being afraid I had made a mistake,” Kim said.

Finally, he served his first customer, and then his second, and then a swarm of people during lunch hour. At that moment, Kim said he felt overjoyed and shared his happiness with his wife over text in the midst of filling orders.

Lim said she felt an enormous amount of pride when she heard that people lined up for her husband’s food.

“He kept texting me saying, ‘A customer came,’ and, ‘They liked the food,’ and I felt so proud of him because he was so happy and I just saw how his hard work paid off,” Lim said.

Kim said after that day, the lines just kept forming. His food became a new trendy spot, with customers posting his creations online.

“My customers, they really seem to like my food, and, you know, I have some very loyal customers that I see all the time, and they have really helped me on social media and on campus because they tell people about my food,” Kim said. “Every time I come back to campus I see even more people than before waiting to try my food and that is because of my customers' support.”

Kim’s business boomed and he now employs two people, and is looking to hire another employee to help with the stream of orders.

Javes Ahn, one of his employees, said Kim’s work ethic is an inspiration and sees Kim as a food visionary.

“You know I started to work at the food truck because I thought it would be fun, and I am happy I did because DongJo works so hard, and it is super inspiring because you can see how happy he is to do his job,” Ahn said. “He clearly loves food, and a lot of times he is being creative with his menu and he clearly has a good vision for what type of food people will like.”

Kim said in light of his success, he is now looking to the future and hopes to open up another food truck. But he hasn’t given up his restaurant dream, either.

“I want to open up another food truck so I can do both lunch and dinner shifts at both the brewing company and at the University,” Kim said. “I also want to hire more employees so I can work more on the business itself and opening up more trucks or even maybe a restaurant hopefully in the future.”

Both Kim and Lim said they are grateful for their loyal customers, who call themselves “BoonSeekers.” They said they couldn’t have done it without their support.

“We owe so much to our customers and our followers on Instagram, who we call BoonSeekers,” Kim said. “Because of their encouragement and advice for our business we were able to survive the pandemic.”