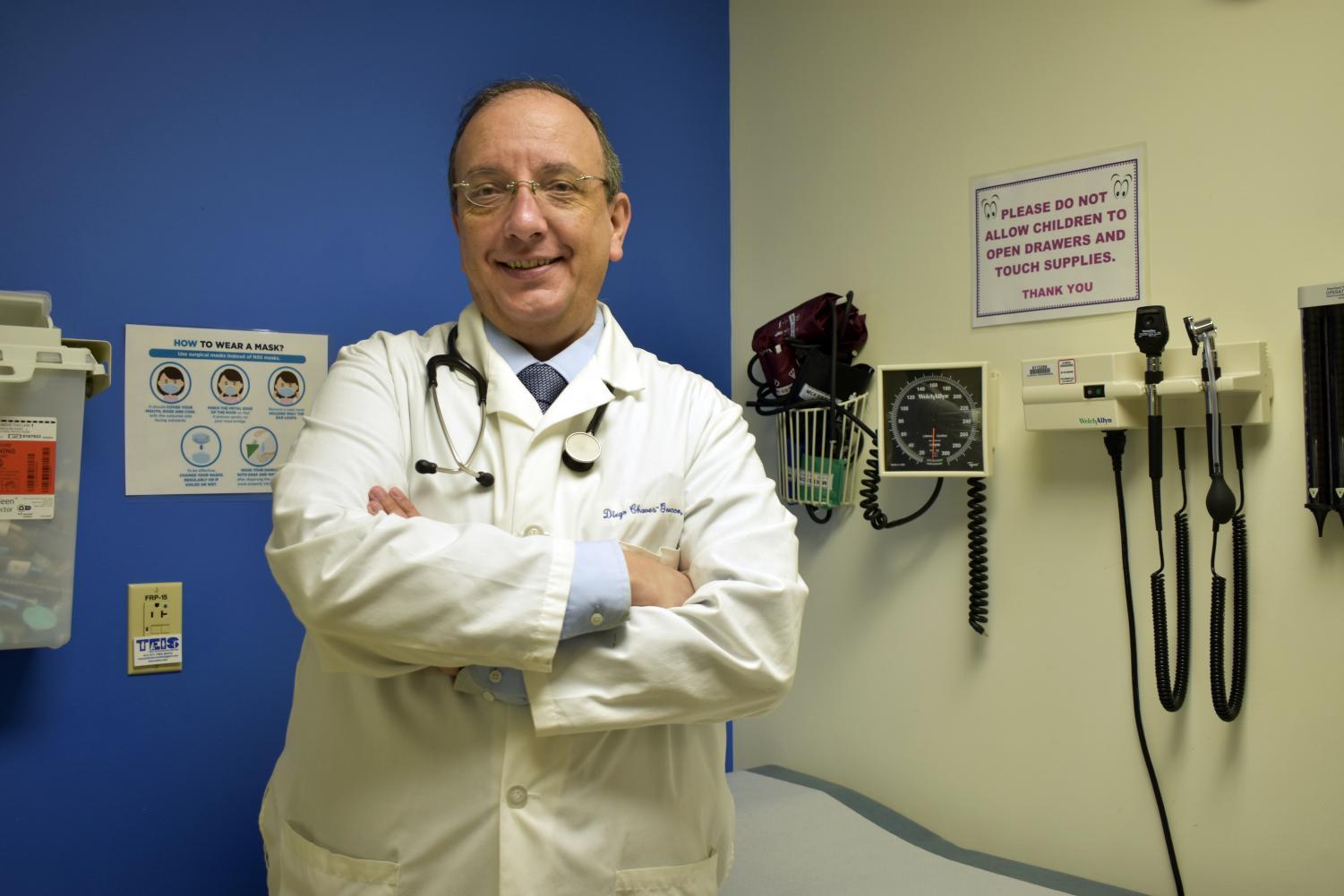 Diego Chaves-Gnecco: Caring for all kids

The most satisfying moments of Dr. Diego Chaves-Gnecco’s 20-year career as a Pittsburgh pediatrician come when his patients grow up and come back to visit him — sometimes, with kids of their own.

“When I see many of the kids that I first started taking care of 20 years ago, that now they are adults, that they have finished their high school, that they have finished college, that's huge for me,” Chaves-Gnecco said. “When they tell me what they're doing with their lives, that they're giving back to the community, that's huge. When they bring me their kids, and they say, ‘I want you to be my pediatrician for my child, because you were my pediatrician,’ that is also huge for me.”

After he became a pediatrician in his native Colombia, Chaves-Gnecco immigrated to the United States in 1998 at age 28 with the plan to train for a year in clinical pharmacology at Pitt. After his first year in Pittsburgh, he decided to stay for another year to pursue a master’s degree in public health — and then stayed for another two years because he was in the middle of conducting research.

Chaves-Gnecco said he eventually realized that he had more opportunities in Pittsburgh than in Colombia — from hospital technology to research journals available in libraries. He decided to continue practicing medicine in the U.S. — but first, he had to redo his residency in pediatrics.

As a resident at UPMC Children’s Hospital, he joined the Community Oriented Resident Education program, where he created the first pediatric bilingual-bicultural clinic in southwestern Pennsylvania. Since its creation in 2002, the clinic has developed into the program known as Salud Para Niños, or “Health for the Children” in Spanish.

Salud Para Niños now holds three clinics each week in Oakland at the Primary Care Center of the Children’s Hospital. It also has one free clinic each week at Casa San Jose in Pittsburgh’s Beechview neighborhood, using the Ronald McDonald Care Mobile, as well as another free clinic once a month at the Birmingham Free Clinic in the South Side.

Maya Ragavan, an assistant professor of pediatrics at Pitt’s medical school who does research on supporting immigrant and refugee communities, has collaborated on several research projects with Chaves-Gnecco in the past three years. She said this work is “a drop in the bucket” compared to all of the work Chaves-Gnecco has done for the Latino community of Pittsburgh.

“You talk to any family and they're like, ‘Oh, Dr. Diego, Dr. Diego!’ which means that he really is just one of the most trusted voices in the Latino community here in Pittsburgh,” Ragavan said. “So many families see him, it's really, really amazing.”

To Chaves-Gnecco, an important part of Salud Para Niños is providing linguistically competent and culturally sensitive care. Besides having Spanish-speaking staff, and translation services for other languages, he emphasized the importance of having humility and curiosity about the cultures and perspectives that his patients come from. Even within the Latino community, he said there exists cultural differences between him and his patients.

“As a Colombian, for example, some of the things, some of the cultural practices that I have might be completely different than somebody from Mexico might have, or from Puerto Rico might have,” Chaves-Gnecco said. “So for us, it’s that sensitivity, that humility, to know that people come from different backgrounds, and that we need to meet them where they are coming from.”

Monica Ruiz, the executive director of Casa San Jose — an organization that aims to celebrate and advocate for Pittsburgh’s Latino community — said all five of her children see Chaves-Gnecco as their pediatrician. She said Chaves-Gnecco’s experience moving to the U.S. from Colombia gives him a stronger cultural connection to his patients.

“Many [other doctors] know the culture too, but he is an immigrant,” Ruiz, whose parents immigrated to the U.S., said. “He grew up in a different area, he knows what it's like to be new in this country … it's something that comes just so naturally from him. It comes from inside of him, it's his passion, it's his ethics, they’re his morals, and he just cares genuinely, like genuinely, about this population.”

Chaves-Gnecco said many of his patients at Salud Para Niños are either underinsured (for example, they have health insurance that doesn’t cover preventative care) or have no health insurance at all, and that number is only growing.

“Despite the pandemic, the last few years — 2020 and 2021 — have been the busiest years, the years that we are providing the most visits to uninsured patients,” Chaves-Gnecco said. “And in 2022, we're on track already to surpass that number as well.”

Ragavan called it “unfair and unjust” that not every child in Pennsylvania has health insurance, and said Chaves-Gnecco goes above and beyond to serve children without it.

“He’s set up all these really cool collaborations with different specialists because, you know, it's harder to get children who need specialist care if they don't have insurance,” Ragavan said. “He spends hours trying to find the most — because, you know, if you don't have insurance, then medication costs a lot of money — and so for five hours trying to find the cheapest version of a medication so families can use it.”

The work doesn’t stop when Chaves-Gnecco leaves the hospital, as he said he sees himself as a doctor outside of the exam room. He uses his platform as a doctor to share information with the Latino community about important health issues such as obesity, diabetes, physical activity, healthy habits and, more recently, COVID-19 and vaccines.

This is sometimes through formal outlets, such as local Spanish news outlet La Mega Nota, but also through everyday interactions with other people. According to Ruiz, he makes announcements each week at the church they both attend.

“He's up there every Sunday, ‘Wear your mask, get your vaccine,’ you know, he'll say it to anybody that'll listen to him,” Ruiz said.

Besides hosting clinics around the City, Salud Para Niños also has Hispanic/Latino Car Seat Checks, where families can have their car seats checked — and sometimes replaced — for free.

Chaves-Gnecco said over the last 20 years, Salud Para Niños has checked more than 650 car seats, and more than 250 have been replaced at no cost to families. The program also created a bilingual literacy project which provides bilingual books to children to get them reading at a younger age. The program has held several classes, including CPR training, in the community as well.

To Chaves-Gnecco, many of the services provided by Salud Para Niños are about tailoring existing services to the needs of the Latino population.

“We didn't try to reinvent the wheel, we didn't try to create anything new,” Chaves-Gnecco said. “The idea was, a lot of times, connecting services that were available.”

Chaves-Gnecco and Ragavan both said the myth of Latinos as an “invisible community” persists in western Pennsylvania — despite the fact that there are nearly 35,000 Latinos living in Allegheny County alone. According to Ragavan, Chaves-Gnecco’s advocacy helps make the community more visible.

One thing Chaves-Gnecco said he hopes people learn from the COVID-19 pandemic is that “we cannot leave any segment of the population behind” when it comes to health care.

“While there might be some cultural differences, like the language that we speak or the food that we eat, at the end, we’re all the same,” Chaves-Gnecco said. “We’re all human beings. And if you talk to a member of the Latino community — or any minority community, for that purpose — you probably are gonna learn that we're much more alike than what we imagine. We all have the same dreams.”