Column | Slowly, then all at once 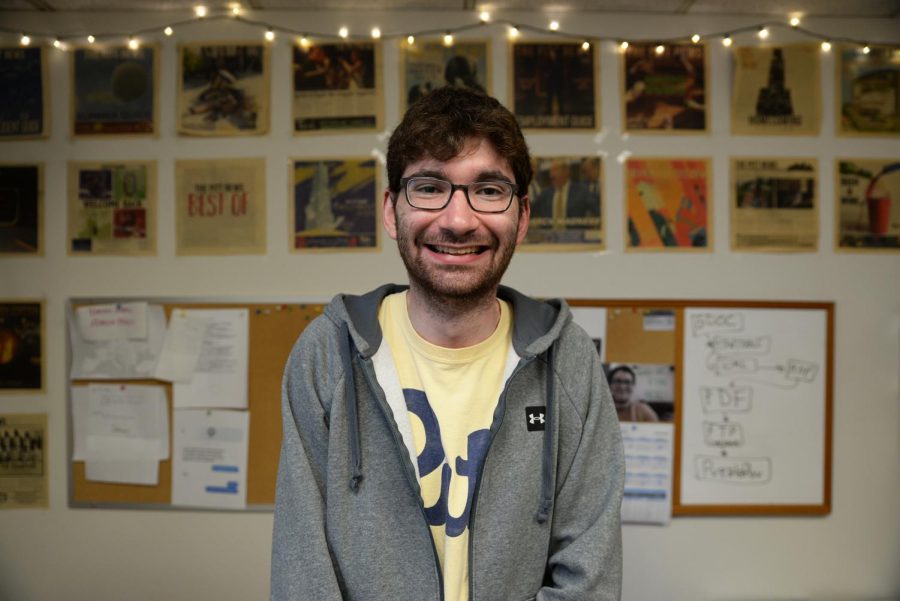 Editor-in-Chief Jon Moss at his desk in The Pitt News office.

It was almost like a sea of blue among the red.

The Panther faithful with cars donned in blue and gold packed the red-topped Sheetz in Summersville, West Virginia. It seemed to be an Oakland oasis, as Pittsburghers stopped for the comforts of home last December about three hours into an eight-hour trek to see the ACC Championship Game in Charlotte, North Carolina.

The trip — like many things in student journalism, including the different roles I have played at The Pitt News — seemed to come together slowly and then all at once.

Sports editors — excuse me, head coaches — Stephen Thompson and Dalton Coppola had worked hard with their staff to produce an extraordinary lineup of coverage leading up to the much anticipated game. It soon became time to plan out coverage of the game itself, and it was decided that Dalton and visual editor Pam Smith would travel together.

In an odd twist of fate, rental car regulations and probably a calling from the Garden State to never be far from an interstate with a high speed limit, I somehow became the designated driver for the Charlotte group. After all of the planning we had done, was 14 hours of driving really going to stand in the way of Dalton and Pam taking the field? And so it came to be that three Jersey expats blasted through the Blue Ridge Mountains while Bruce Springsteen and Billy Joel poured out of the car speakers.

Many different parts of the newspaper came together that night and week to create a truly special time capsule. About a dozen people were running what was essentially a newsroom — where you usually have to walk just a few steps to talk with someone — operating two bureaus 500 miles apart, who together reported a big news event in a truly comprehensive fashion. This was, somehow, just one major storyline of the past few years.

It took many early-morning Slack messages, late-night texts and Apple CarPlay calls to make it all come to be, as well as rock-solid leadership from my TPN copilot Rebecca Johnson to pull it all off. There was no playbook for any of this, and I’m still impressed by the amazing coverage that my coworkers produced.

When I try to explain to my friends why TPN is special, I think of the Stephens, Daltons, Pams, Rebeccas, Mary Roses, Baileys, Rileys, Marthas, Punyas, Betuls, Megans, Clares, Maggies, Leahs, Shrutis and so many other standout people that I have been lucky enough to cross paths with during my time at TPN.

What was next, an outpost in University Park?

This one instead seemed to be a challenge for how fast the brains of three TPN editors could process new information, as we pulled an all nighter during the 2021 Student Government Board election controversy.

What appeared to be shot glasses — or “Hershey’s cup holders,” depending on who you asked — emblazoned with the name of a group of students running for SGB seemed to turn campus, and our lives, upside down. We pestered officials throughout the night for information about why and how an election was being turned on its head at the last minute.

At one point, my then TPN copilot Mary Rose O’Donnell noted the sun was starting to rise in the window behind my shoulder after a sleepless night. This elicited groans and certain choice words on our Zoom call with Rebecca, which had been running for who knows how long at that point. The “3am gang” was born.

The two-day period during the heat of the election controversy was, as far as I can tell, the fifth-busiest two days on our website, ever.

Friends and acquaintances who I and other TPN coworkers hadn’t heard from in years began to reach out, and ask what exactly this Student Government Board business was all about. It seemed word had gotten out, and we were the only place to reliably find out what was happening. Perhaps this was what a newspaper was for, I wondered, before dozing off for a quick nap during the day.

My eyes bulged while climbing up Cardiac Hill with my family. The elevation, somehow, didn’t seem to be the problem this time.

Satellite trucks lined DeSoto Street by the emergency entrance to UPMC Presbyterian Hospital on that late October morning, and we soon saw the street we had just walked on plastered on a TV in my dorm’s lobby.

The days after the Tree of Life massacre were some of the strangest and most confusing I’ve ever experienced. I’d just moved a few months earlier from what was essentially Jewish capital of the United States to a city which would now take on a different sort of meaning in our community — home to the deadliest anti-semitic attack on American soil, with 11 dead. I thought more than once about packing up my stuff to head home, wondering whether I was welcome here.

Then I saw the front page of the Pittsburgh Post-Gazette on Nov. 2, 2018, with the opening line of the Jewish mourning prayer written in Hebrew across the top. I had never seen something like it before, and haven’t since. It forever changed my views on what journalism was, what it existed to accomplish and it was one of the key reasons I am trying to go into this field. Perhaps this craft is about attempting to understand your neighbor as best you can, and then explaining what you learned to your other neighbor, in a way that brings people together and makes them feel truly understood.

I still keep a bookmarked copy of that front page on my laptop, and use it in my current role as a model for how I think about community-newspaper relationships.

It is my hope that our coverage of the many major news events during these tumultuous past few years have followed this model as best as we can, while being journalists that are always learning something new on the job.

Student newspapers are often laboratories of journalism on college campuses, and Pitt surpasses this definition. There is no journalism program here, so TPN is one of the only places where students can go to learn the craft.

My most sincere hope is that this 112-year-old newspaper can continue to evolve and adapt to our student body — as it has since, nearly a century ago, a reader literally picked our name for us — to meet the needs of today and tomorrow.

Jon Moss has served since April 2020 as the fourth-ever editor-in-chief of The Pitt News to work for two terms, and will graduate in May 2022. He looks forward to cheering on Volume 113 and beyond from the sidelines, as a proud Pitt News alumnus.