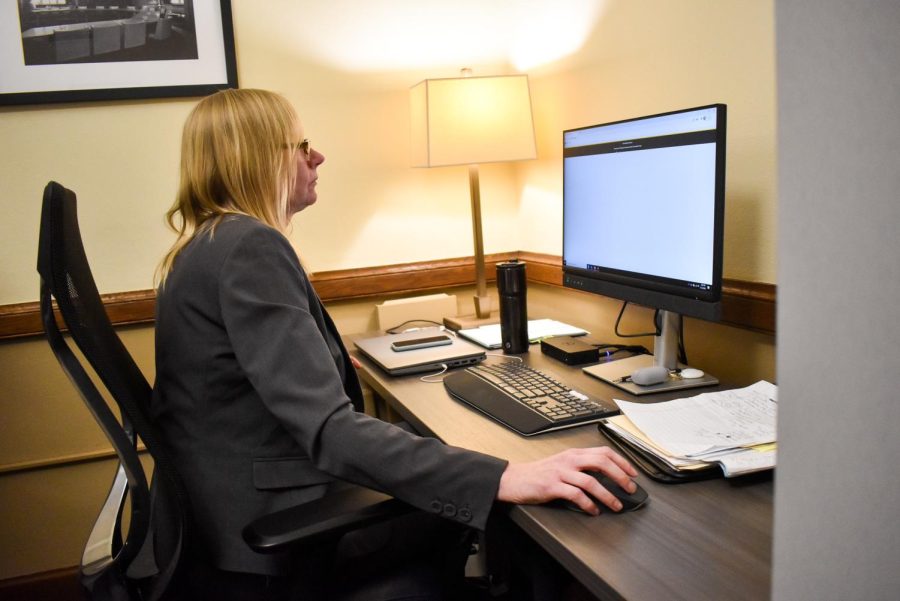 A Pitt employee works in a Cathedral office last Tuesday.

Roughly half of Pitt’s more than 7,000 employees now work remotely at least part of the week — a sea change in how the University does business, according to a top Pitt official.

“I’m really pleased that we’ve been able to advance this initiative as smoothly as we have, and to the extent that we have,” David DeJong, the senior vice chancellor for business and operations, said. “It’s a nice development, and we’ll see how it goes. I think we’re still in the early stages.”

The COVID-19 pandemic has accelerated efforts at Pitt to reimagine how physical space is used on campus, leading to increased remote work for staff with potentially more space for students and even cost savings for the University.

DeJong, who oversees everything from the police to dining and human resources, said the pandemic has taught Pitt that there are “a lot of arrangements that can work.”

“I think we’re all very sick of the 100% remote posture after a while,” DeJong said. “But man, when we’ve been able to come back — again, our goal wasn’t like a number [of people to work remotely], but it was what makes sense for our operations and then what makes sense for individuals.”

Pitt issued an interim Flexible Work Arrangement policy in July 2021 for staff members, which allows for either Pitt to direct or an employee to request to work from a “designated work area,” such as an employee’s home. DeJong said the interim policy has roots from a listening tour he did while serving as the interim head of Pitt’s human resources department.

“We went out and we went on a listening tour, and were talking about things about working at Pitt that were great, things that could be better,” DeJong said. “We had a remote work posture at that time, but it was very rarely used and we just didn’t have the culture, and you know changing culture is tough. I thought that this would be something that we wouldn’t see immediate dividends for, but of course then the pandemic happened.”

Angie Coldren, the Staff Council president, remembered participating in the listening tour, which included many discussions on remote work, but also about other key topics.

“It was around things like child care, it was around things like parking, it was just a plethora of, ‘What is Pitt doing well? What can Pitt improve on? What changes can we make?’ Those types of things,” Coldren, the administrative support director in Pitt’s research protections office, said. “It was broad, but that was probably one of the biggest things.”

Coldren added that members of her organization have been working hand-in-hand with administrators to shape and implement the latest policies, and have been part of more planning efforts in the last year than likely ever before.

DeJong pointed to one recent move as a potential model to replicate around campus. He said some employees from the chief financial officer’s office vacated space in the Cathedral of Learning, allowing for staff from the Office of Equity, Diversity and Inclusion to move from Webster Hall into the center of campus.

“An opportunity for them to be much more centrally located and accessible in advancing their mission,” DeJong said. “It’s a great outcome.”

He also noted that Pitt IT will have office space at 3512 Fifth Ave., located between McKee Place and Meyran Avenue, configured specifically for hybrid work arrangements. The building will include hoteling stations, offices and conference spaces.

DeJong said Pitt looks to “jump” at opportunities to repurpose and renovate spaces around campus.

“We’re always looking to make sure we’re making the best use of all of our resources,” DeJong said. “Space probably being the most — I don’t want to say the most precious one, but space is always a very important one.”

Coldren said her own office space — located in the Hieber Building, at the corner of Fifth Avenue and McKee Place — has been affected by the shift toward more remote work. Pitt used to occupy five floors, but she said it decided to combine four of the five floors.

DeJong didn’t have an estimate for potential cost savings in having so many employees work remotely — in particular whether some leases for off-campus space could be shrunk or not renewed.

He said a “really important consideration” that Pitt is working on right now is whether to compensate employees for work-related purchases to equip a home office, such as furniture or faster Internet.

Coldren said such expenses are something that Staff Council members “haven’t really discussed” with administrators, while noting employees are likely to save money on gas and car maintenance by not commuting everyday.

As staff members shuffle around campus, there are potential opportunities for Pitt to create more spaces dedicated to students. There has been an ongoing campaign for a LGBTQ+ student center, as well as Black students asking for a dedicated place to congregate, outside of the Black Action Society’s current offices.

DeJong said he is “very aware” of student needs for space.

He noted that administrators are still assessing what specifically to do with the former 20th Century Club building, located across from Chevron Science Center, saying it’s “one we’re looking at for a potential solution.”

“Outdoor recreational space, I would say, is top of the list. But I think that indoor gathering space, medium-sized spaces down to small rooms for, like, clubs and so on, is very much on our list,” DeJong said. “This could be an opportunity for that.”

Harshitha Ramanan, the Student Government Board president, did not reply to requests for comment.

More staff members working remotely can have a ripple effect that affects other parts of the University — including the Parking Services office, and its legendary waitlist for the Soldiers and Sailors garage.

DeJong said Pitt is working to adjust its menu of parking options in order to “reflect the new reality that a lot of people have.” One example he pointed to is a system under development where multiple staff members could share a single parking pass, to avoid paying the full monthly rate.

“When all the dust settles, I think that we’ll have more parking capacity without adding more spaces,” DeJong said. “We’ll be able to accommodate a greater amount of the demand with the capacity we have, as we evaluate opportunities to address our capacity issues.”

DeJong said it will be crucial to see how things ultimately evolve on remote work.

“We’re experiencing this, we’re giving folks time to say, ‘Is this how we really want to stay? Is this the right balance?’” DeJong said. “Maybe some people are working 40%, they may end up going 60. We’ll have to see all of that. Right now, as I anecdotally talk to folks who are working in flex modes, they’re really happy.”