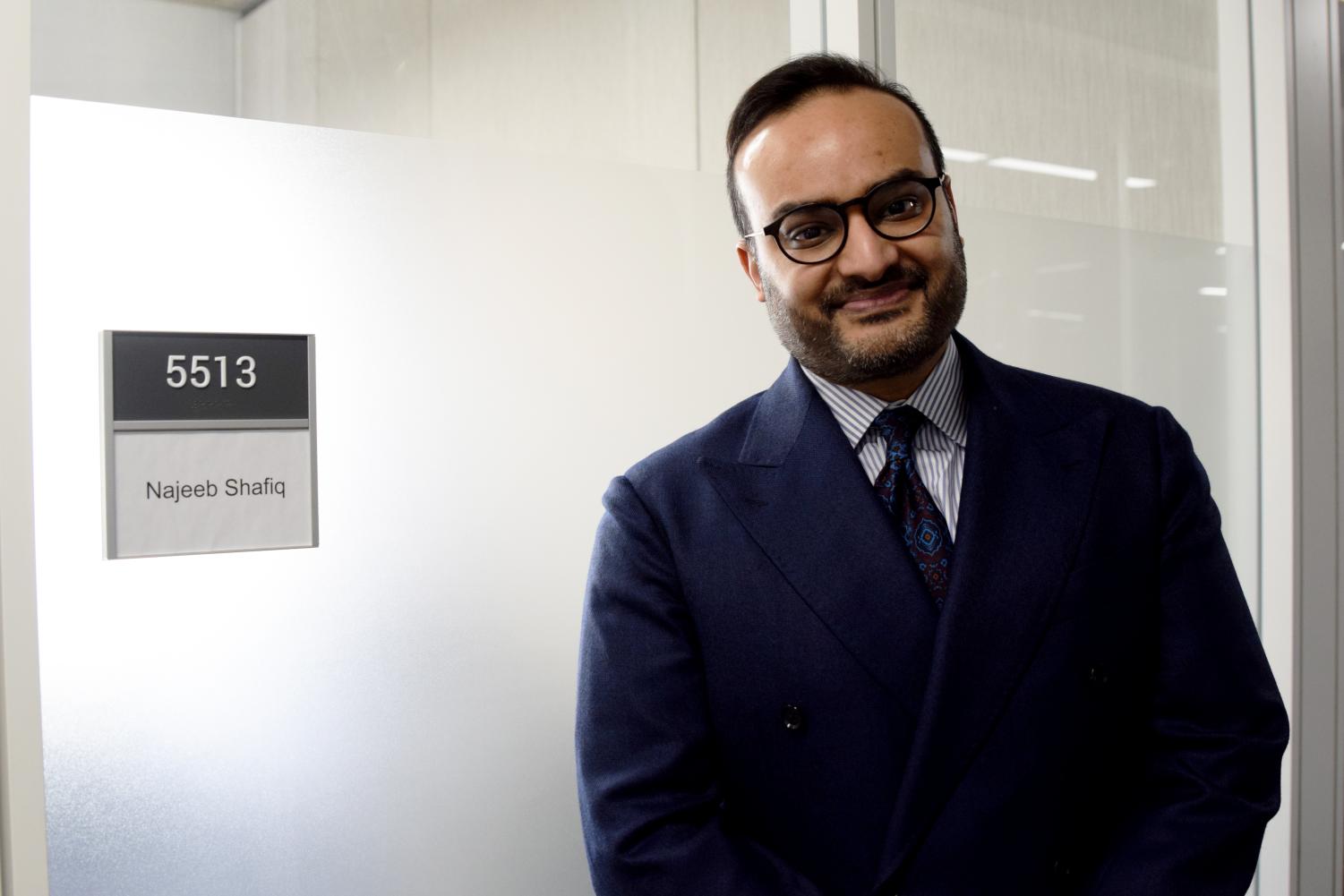 Najeeb Shafiq studied comparative education as a child, whether he knew it or not.

His family lived in the ascendantly wealthy United Arab Emirates, where his father worked as a government accountant. They returned to Shafiq’s poorer native country of Bangladesh each year, making him perceptive to inequality at a young age.

“Many kids were not in school. Most kids did not go beyond primary school, so you saw child laborers everywhere,” Shafiq said. “So the contrast for me was something that I was always very sensitive to.”

As a professor of education, economics and international affairs at Pitt, there’s great breadth to Shafiq’s research, but he focuses on educational opportunities and non-monetary impacts of schooling in lower-income, predominantly Muslim countries. With a first-hand understanding of the complicated trade-offs many families face when deciding to send their kids to school, his experience in Bangladesh helped inform some of his early work on child labor.

“You need your girls and boys to somehow get some education, some of their basic literacy and numeracy, but you need them to support the house,” Shafiq said. “Telling that story in a quantitative way, a sophisticated way that reflected reality was important to me.”

He also serves as executive director of the Pitt-based Comparative and International Education Society — an association of researchers, policymakers and educators who focus on education outside the United States. With the help of a “small but incredibly professional staff,” he oversees the organization’s finances, arranges conferences and advises the board.

A pair of Bengali economists, Muhammad Yunus and Amartya Sen, inspired Shafiq to pursue a Ph.D. in economics and education from Columbia University in 2005, despite a career in academia being “unusual” for the time.

“They taught economics and they were also able to contribute in a positive way to the world, and I just thought that was powerful,” Shafiq said. “They were my inspirations, but none of this would have been possible without, of course, my parents. My mother and father were extraordinarily supportive.”

Shafiq’s gratitude toward America is yet another glimpse of his comparative inclinations.

“All of this, all of these dreams would not have happened if it had not been for the opportunities this country and its institutions have given me,” Shafiq said. “Universities in other countries are not as willing to provide tenure-track opportunities to foreigners from lower income countries.”

Henry Levin, professor emeritus of economics and education at Columbia University, advised Shafiq while he pursued his Ph.D. Levin said while many attend graduate school primarily to climb the socioeconomic ladder, Shafiq dedicated himself to a “kinder and more productive” society.

According to Levin, Shafiq hasn’t lost that pure intention, despite his professional workload.

Shafiq began teaching at Pitt in 2010, a campus he called his “favorite” in letters to friends and family when he toured as a prospective graduate student.

“There is really nowhere else I’d rather be a professor than Pitt,” Shafiq said. “The spirit of collaboration at the University of Pittsburgh is just off the charts.”

Shafiq said interdisciplinary communication is “the most normal thing” here, something he found lacking at other institutions. Prior to joining Pitt, Shafiq said he received excited emails about his prospective arrival from future colleagues in the School of Education, but also from other parts of the University. Now a decade into his tenure, he’s presented at political science seminars and psychology labs, and regularly gets detailed feedback on his research from friends in a variety of departments.

Maureen McClure, an associate professor in the department of educational foundations, organization and policy and director of the Institute for International Studies in Education, helped recruit Shafiq to Pitt. A member of CIES, she said when working with Shafiq, “what you see is what you get.”

Shafiq excels at analyzing problems in a measured, thorough way, all while maintaining a sense of humor in good times and bad, according to McClure. He’s a “diplomat” in his role as executive director at CIES, and a “good global citizen” across the board.

“He is a methodologist, he is a comparativist, he is a very fine statistician and he puts that to work for the social good,” McClure said.

Shafiq preaches a slow and steady strategy to his students, one that will lead them to a satisfying, sustainable career. Many doctoral students will rush to build an impressive resumé by contributing to a well-established professor’s research, Shafiq said, but this prevents students from nurturing their academic independence.

Shafiq admitted that forgoing early publications and citations in top journals may be “frustrating” for students, but it will leave them “much better equipped for the long run” — a lesson imparted by Levin at Columbia.

Nuance and integrity reign supreme for Shafiq, guiding his research despite conformist pressures.

When the report came out, Shafiq’s study was nowhere to be found.

“If your research does not almost entirely support the narrative that is being pushed, you don’t get to have a seat, I mean, you don’t really get to make a difference,” Shafiq said. “I’m okay with that.”

Manipulating data might have allowed him to grow his fame within academia, but honest interpretation comes more naturally to him — an instinct he tries to pass along to his students.

“There is always a way to torture the data to have it submit in a way that confirms what is socially desirable,” Shafiq said. “The pressures are intense to come up with a finding that’s tweetable, that can get a lot of attention, but in my view, it’s not worth the reputational damage in the long run.”

True to form, Shafiq finds a comparative silver lining in the tension between researchers and policymakers.

“That’s the great thing about American academia, is that it doesn’t matter if people like your findings or not –– we’ve got tenure, we still have a job and that encourages us to tell the truth,” Shafiq said. “The public trusts us to do the right thing and to present reality and the messy version that it is.”