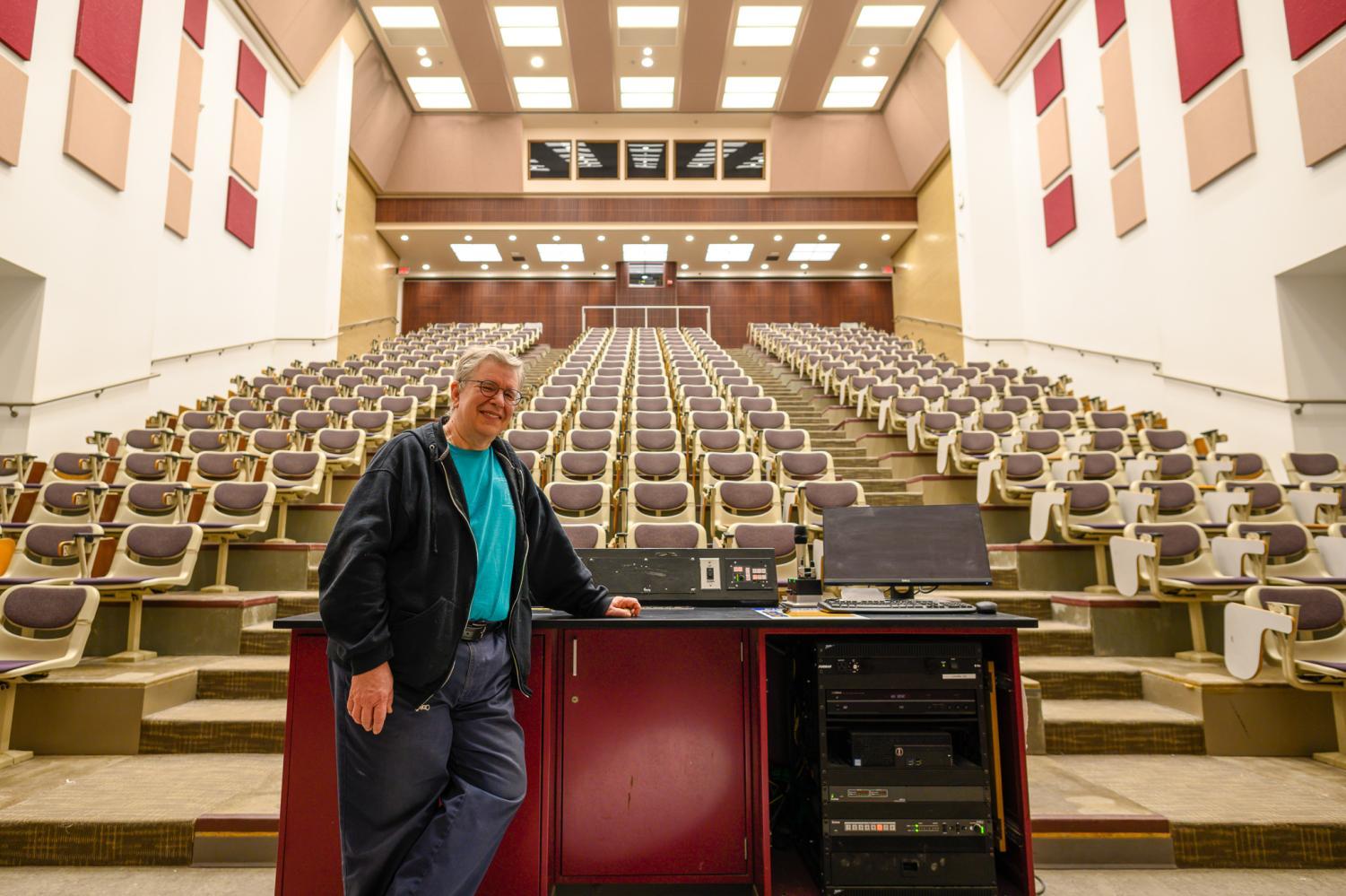 George Bandik may teach about chemical linkages like esters, ethers and epoxides, but he is always in search of another type of bond.

Over the course of his 41 years at Pitt as a graduate student and professor — during which he has taught multiple classes offered by the chemistry department, including Nursing Chemistry and Writing in Chemistry — Bandik works to form a personal connection to his students.

Bandik currently teaches organic chemistry to a large group of almost 250 students — all of whom he tries to learn the names of.

He always knew he wanted to teach, but wasn’t sure if it would be chemistry or music. Bandik is proficient in the organ and piano, playing the former in his church and the latter every night before bed to relax.

Bandik, who currently serves as an assistant dean in the Dietrich School of Arts and Sciences while also teaching organic chemistry I and II, is a very hands-on professor. He finds the typical structure of large lectures with slides on the board uncreative. He makes his classes dynamic, walking around the room and writing examples on the chalkboard.

“I went to Penn State, so I went to a very large school, where we also had very large lectures and many of them were very boring and so I thought what could I do that’s different or to make it work,” Bandik said.

Taylor Tomlinson, a senior who took Bandik’s organic chemistry class in 2019, said there was constant motion in the classroom.

“Whenever he’s teaching, he’s always running up and down the aisles and asking questions,” Tomlinson, co-president of Pitt’s American Chemical Society chapter, said.

Even during the shift to Zoom during the COVID-19 pandemic, Bandik was able to keep the class engaged and still made an effort to learn all of his students’ names.

“I taught 250 students in organic chemistry on Zoom. I would probably say at least 80 to 100 of those kids had their cameras on,” Bandik said. “I would scroll through and I would call people out and say, ‘Alright Joe, what do you think about this?’ So I was able to still have people engaged and people chatting.”

He knows that many of his students may not see organic chemistry as something necessary to their academic journey, so he instead tries to teach the students applicable skills for life. Bandik wants his students to know how to “think your way through solving a problem,” a skill he sees as crucial for the rest of his students’ lives.

“I always tell my kids, when you’re a medical doctor, no one’s really going to ask you to write the electron configuration of magnesium, right?” Bandik said. “But you want to be able to explain the disease that someone is dealing with, and if it’s a complex disease, you got to be able to explain it at a level that your patient can understand.”

He still connects to his students years after teaching them — not just about chemistry but about life.

“I taught [a student] five years ago and he’s in med school here,” Bandik said. “He periodically stops in just to have lunch or say hello. … We don’t talk about chemistry today. … But it’s just neat that somebody takes time out of their schedule to just come back and say hi.”

“Anytime he is in his office, he’s always game to answer anyone’s questions. And not just relating to organic chemistry, but also with life,” Kulp, a senior who had Bandik as a professor, said.

As the ACS faculty adviser for the last 30 years, Bandik has helped plan outings into the larger community to teach about science, and participate in the Carnegie Science Center’s National Chemistry Week celebrations. The chapter has even won awards, all proudly displayed in Bandik’s office.

“I definitely think he’s a good role model, especially for the elementary school children that we go see in different local schools,” Tomlinson said. “Like just yesterday, and in the past, like we’ve been at outreach events where he really gets their minds thinking about chemistry and science and you can tell they really enjoy it and that they’re glad he’s there, sort of guiding us through the activity but also, like, giving them the space to be creative.”

Both Tomlinson and Kulp have known Bandik since their sophomore year, when he taught them organic chemistry. They joined ACS after he urged them to during class.

“He really encourages his students in his class to join it and that’s how I got involved and I also became a chemistry major that year,” Kulp said.

Bandik tries to make learning fun, even during exams. He likes to stump his students — sometimes to the point that his students laugh while taking their final exam.

“In organic chemistry, you have some mechanisms and if you don’t start in the right place, you’re going to get the entire thing wrong. So he was running up the aisle and he looks that I’m just sitting there, staring at this one mechanism and I don’t know where to start. And he goes, ‘I stumped you, didn’t I?’ and slaps me on the back,” Tomlinson said in between giggles.

Bandik cares not only about the grades his students get, or if they learn organic chemistry. He cares about their well-being, future plans and how to enjoy learning. He makes a large class feel small by learning names and being accommodating. His students feel like they obtain skills not only in chemistry but in life — and he’s there to help guide them.

“I think that learning to listen to complex ideas, to be able to think your way through solving a problem … are the big skills,” Bandik said.