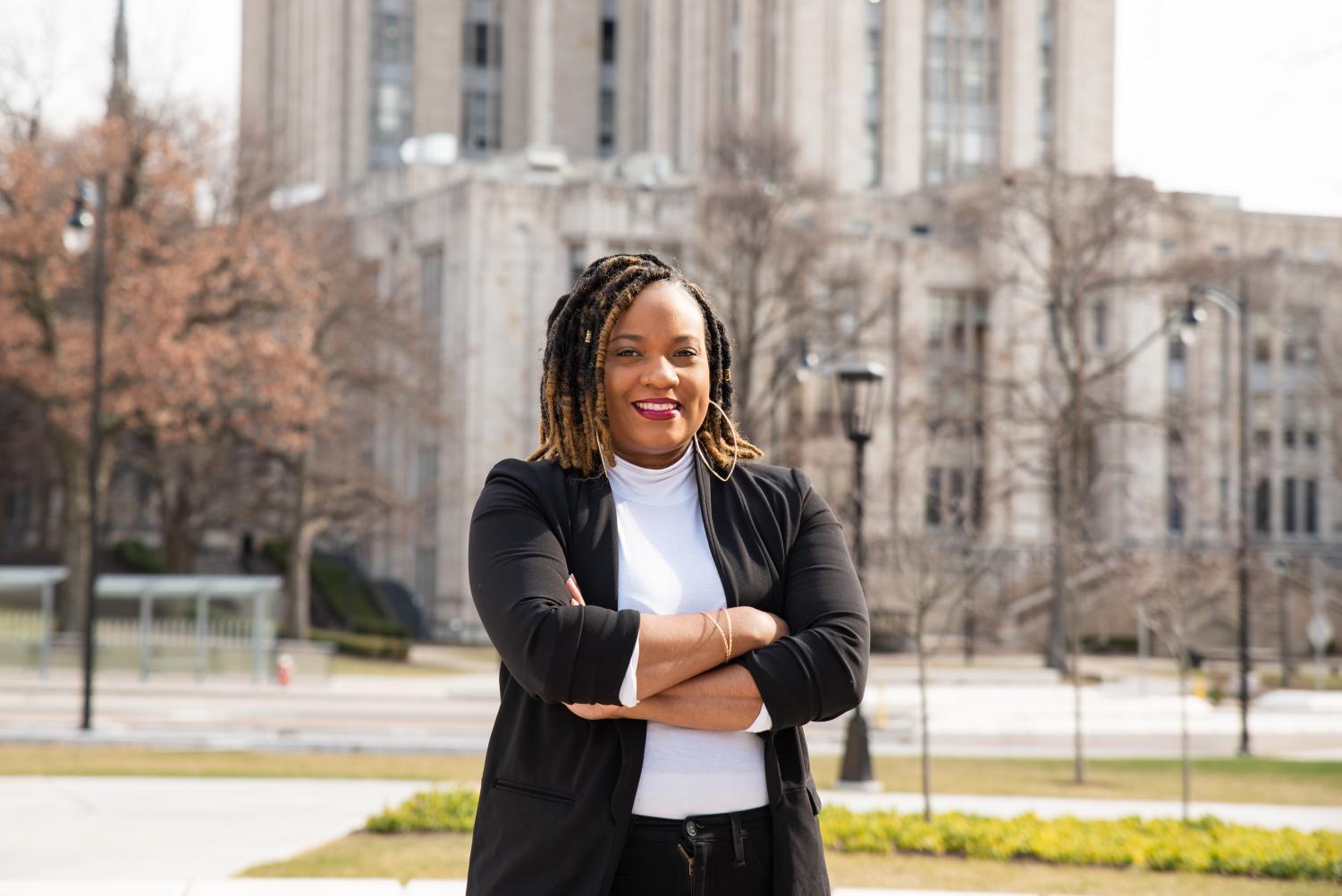 Growing up in Guyana, Shenay Jeffrey spent her childhood surrounded by many under-resourced communities. Her multicultural upbringing helped her discover her passion for community advocacy.

“Guyana is a beautiful country and a multicultural space, but also, it was colonized and it has a lot of rich resources that have not been fully developed,” Jeffrey said. “A lot of its spaces are under-resourced — it has a lot of potential. So Guyana was where I started off my journey.”

Advocating for community members became particularly challenging during the ongoing COVID-19 pandemic, but Jeffrey’s sense of determination did not waver.

“I think we’re living in a very exciting time where we’re always thinking about potential opportunities for the future,” Jeffrey said. “COVID took a lot of lives, but I think it also brought us a light switch and urgency for innovation.”

Her response to the pandemic reflects an aspect of her character — Jeffrey puts 110% into everything she does, imagining many possibilities for community engagement. Jeffrey is the interim director of PittServes, where she constantly seeks opportunities to improve the Pittsburgh community for young people, immigrants and women of color.

Jeffrey — a Pitt alumna who graduated in 2010 with a bachelor’s degree in health information and management — immigrated from the Bahamas to central Pennsylvania with her parents as a teenager. She received her master’s degree in public and healthcare management from Carnegie Mellon University in 2016 and recently completed her doctorate from Pitt’s School of Education, where she focused on civic identity of students of color.

Jeffrey has worked for PittServes since 2016 and became interim director last October. During her time at PittServes, Jeffrey was instrumental in Pitt’s first Civic Action Week in October, as well as the Pitt Community Tutor Collective, which officially started in fall 2021. She said PittServes created these initiatives in response to hardships perpetuated by the COVID-19 pandemic.

“We can’t be afraid of innovation and creativity,” Jeffrey said. ”Sometimes we just have to act and make the best-informed decisions with the information at hand that benefit our students and the well-being of the community.”

Jeffrey said her upbringing in under-resourced Guyana and the hardships she faced as an immigrant in college inspired her to advocate for change in the Pitt community.

“I struggled a lot with financial aid, due to my immigrant status, and basic needs when I was a student,” Jeffrey said. “There were many times that I would get nervous at the end of a month because I would think, ‘How am I gonna pay rent? I don't know. How am I gonna eat?’ We didn't have a pantry.”

Besides fulfilling her role as PittServes’ interim director, Jeffrey is on the board for New Voices for Reproductive Justice, an organization dedicated to advocating for policy change in women’s reproductive health that was started by three Black Pitt alumnas.

Jeffrey said New Voices for Reproductive Justice is one of her favorite organizations in the Pittsburgh area, because it always challenges her to learn something new.

“New Voices for Reproductive Justice has taught me so much about myself as a Black woman and my own agency,” Jeffrey said. “But also my choices for myself, my body, my family and my environment and how those things interplay in certain outcomes or certain choices that I have.”

Jeffrey said that the political involvement intertwined with the organization allowed her to make lasting connections with young people.

“New Voices for Reproductive Justice shows the importance of political, environmental and financial involvement — all of those kinds of health areas,” Jeffrey said. “I love being around young Black people and getting that joy and sense of understanding and mentorship and advising.”

Another way she builds connections with young people is by leading service trips through PittServes. From her first year with the organization until the COVID-19 pandemic, she led a group of students on a trip to Ecuador during an alternative spring break, where they performed groundwork for the local community. Jeffrey said the trip challenged her to practice flexibility, team-building and leadership skills.

“We were talking about our experience being Black women at Pitt — I was so struck by the similarities around our experiences, because at that point, I'd graduated years ago, and they were still going through these things,” Jeffrey said.

Jeffrey said the conversation led to a sense of shared understanding between her and the students, but they also felt the need to do something about injustices faced by Black Pitt students.

“We came up with this idea that we could have this intergenerational mentoring with Black students in Black spaces in Pittsburgh,” Jeffrey said. “We also wanted it to be managed and supported by Black staff, so as to create this pipeline. So hence, Black Youth Connection was born, and it has since become a space of Black celebration.”

Carrie Finkelstein, the strategic projects manager for the Office of Community and Governmental Relations, works closely with Jeffrey to operate the tutor collective. Finkelstein said while working together, she and Jeffrey ensure the student tutors receive top-tier training in tutoring, anti-racism and community engagement.

“Shenay is really forward-thinking in that she cares really deeply about impact,” Finkelstein said. “She’s always game to try something new that will enhance the work and she always has these amazing ideas of how we can really move our work forward and collaborate.”

Finkelstein and Jeffrey faced various challenges while setting up the tutoring program, such as ensuring the tutors had top-quality training. Finkelstein said despite the doubts she had when the two first started the program, Jeffrey was always an encouraging figure and an excellent communicator between Pitt’s tutoring partners.

“Shenay is very student centered,” Finkelstein said. “She’s very good at keeping the work about the people we serve, whether it be the students who are tutoring or the ones being tutored. Challenges don't really feel like challenges when you're working with Shenay — they sort of feel like opportunities that you can grow from.”

Finkelstein said one of the things she admires most about Jeffrey is her ability to maintain strong relationships with the students she works with.

“Shenay is very good at recognizing people’s skill sets and really utilizing them,” Finkelstein said. “She lets students take ownership of their work, but is always there to guide and be a mentor. Students — long after they graduate — are coming back to just check in with Shenay.”

Jeffrey said the goal of the tutor collective is to embody an anti-racist, equitable education framework. Jeffrey said based on her experiences surrounding the most prevalent examples of tutor-tutee relationships, many misunderstandings can arise, so the collective hosts a series of workshops in which the group discusses themes of race and culture.

“We challenge thoughts like, if you think of tutoring, why's it always a white person as the tutor and a person of color as the student?” Jeffrey said. “We’re constantly having conversations to challenge those ideas because part of our approach in the Pitt Tutoring Collective is holistic understanding of the people that we serve.”

Jeffrey’s dedication to the community inspires students like Jamal Johnson, a senior English writing major, who acts as student coordinator of PittServes’ community assistant program. He is a liaison between PittServes and various nonprofit organizations in the community.

Johnson first met Jeffrey last year when he joined PittServes as a community assistant. He said he admires Jeffrey because of her confidence in everything she does.

“Shenay is extremely strong and determined,” Johnson said. “When she walks into a room, it's like, ‘Whoa, Shenay is here.’ Whenever I'm talking to her, I’m thinking, ‘I'm talking to Shenay. Gotta make sure I'm paying attention.’”

Johnson said PittServes has heavily influenced his career goals. He began college with plans to seek a career in law, but now he wants to attain a more permanent position at Teach for America. He credits Jeffrey for acting as a mentor to him since he joined PittServes.

“Shenay has energy unmatched,” Johnson said. “She played a big role when I was deciding on a career because she helped me and mentored me through this position. PittServes opened my eyes to a whole different aspect where you can really understand how the community works.”

Jeffrey said while many of the students she works with view her as a mentor, she hopes to remind them of their own self-worth, despite struggles they may face.