The Pitt News • May 24, 2022 • https://pittnews.com/article/173620/sports/column-recent-additions-put-pitt-mens-basketball-into-win-now-mode/ 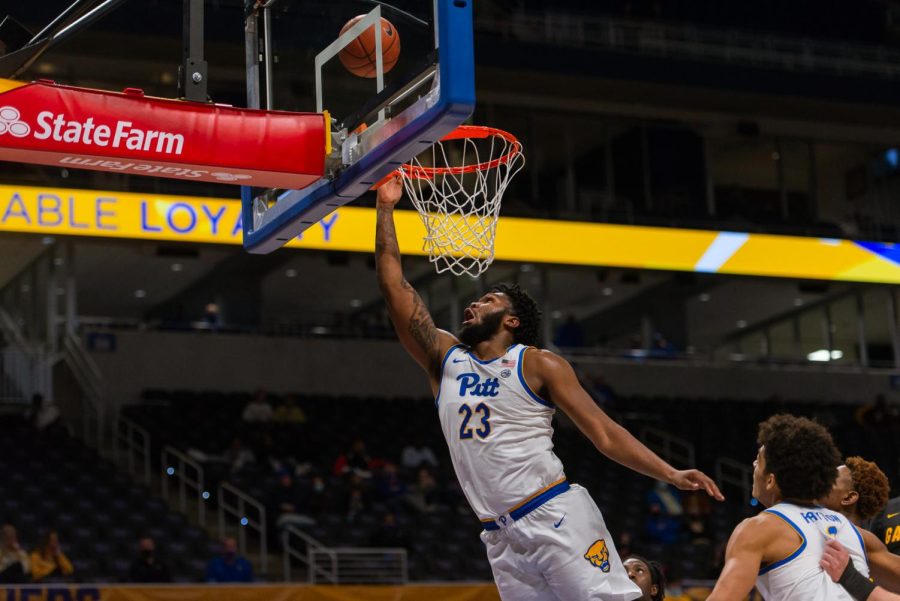 Pitt sophomore forward John Hugley (23) scores during the men’s basketball exhibition versus Gannon at the Petersen Events Center in November.

If someone called the 2022 offseason a whirlwind for head coach Jeff Capel and the Pitt men’s basketball program, it would be a gross understatement.

Since their underwhelming loss to Boston College in the ACC Men’s Basketball tournament back in March, the Panthers have gone on to lose eight players to the transfer portal and players graduating.

For a lineup that already featured a number of holes during the season, a plethora of transfers in March only exacerbated the team’s weaknesses from the 2021 season. Both the backcourt and frontcourt took massive hits in the portal, leaving Capel with seven scholarship positions to fill over the rest of the offseason.

Since April 1, Capel has finally started to show some of the recruiting prowess he was so highly touted for during his tenures at Duke and Oklahoma.

Junior guard Femi Odukale was the seventh former Panther to enter his name into the transfer portal back on April 1 — it took the Panthers less than 24 hours to find his replacement. The program announced that Colgate graduate transfer guard Nelly Cummings was joining Pitt’s depleted backcourt.

Cummings put the college basketball landscape on notice with a 20-point performance against Wisconsin in the first round of the NCAA Tournament. His scoring and playmaking ability — especially against tough competition — is something the Panther’s desperately needed in their backcourt.

Almost two months after Pitt announced Cummings commitment, the Panthers added yet another veteran piece to their experienced backcourt with Marquette transfer Greg Elliott. The redshirt senior guard will add more scoring ability at guard, as he shot 41% from beyond the arc in his four years with the Golden Eagles.

The Panthers went from having a backcourt that needed a scoring threat to one that has depth and serious playmaking ability in a mere 60 days. The two transfers, along with returning senior guards Jamarius Burton and Nike Sibande, bring an abundance of experience at the Division 1 level. Their leadership and scoring ability will be paramount to the Panthers potential success in 2022.

With their backcourt situation now firmly resolved, the Panthers also needed to address gaps in their frontcourt. They managed to retain junior forward John Hugley, who emerged as a force for the Panthers in his first full season with the team.

At 6 foot 9 inches, Hugley was the tallest player on the roster following the exodus of transfers and graduates from the frontcourt. Surrounding him and the revamped backcourt with physical players became even more of a priority for the Panthers than finding a new guard.

The Panthers first added 6’ 7” junior guard/forward Blake Hinson. The former Rebel missed the entirety of the 2021 season after transferring to Iowa State, but showed flashes in his time with Ole Miss, averaging 10.1 PPG in his final season with the team.

Fans will be interested to see how Hinson bounces back after being away from competition for an entire season. Regardless, he is yet another addition who can score from deep and play multiple positions with the team.

Federiko has potential to be a solid addition for the Panthers. But he may have some growing pains while transitioning from a Junior College to a Division I program. He has the physical capabilities, but needs to add size and become stronger to compete with ACC front courts. Still, he fills a need for the Panthers, and fans should be thrilled if he blossoms like Gueye did during his lone season in Pittsburgh.

The Panthers added their only two high school prospects with forwards — and twins — Guillermo and Jorge Diaz Graham. The Spanish twins played just one year of high school basketball in the US with IMG Academy in Florida. Despite only just dipping onto the college recruiting scene, Capel and his staff moved quickly to lock them into the program, beating out schools such as UMass and Utah to land their commitments.

The two forwards add more much-needed size to the Panther frontcourt, with Jorge measuring in at 6 foot 10 and his brother Guillermo at an even seven feet. What stands out most is their scoring ability. While being able to play down low, both brothers are excellent shooters with the ability to score prolifically from beyond the arc.

As was the case with Federiko, there may be a learning curve for the twins to begin competing in ACC play. Still, they have the height, shooting ability and passing ability to immediately emerge as assets to the Panthers, and should only get better as they progress physically this offseason.

With their new set of experienced guards and additions to the frontcourt, Pitt suddenly finds themselves in a potential “win now” mode — a situation not many fans could have projected considering the team’s losses at the beginning of the offseason. Without many years of eligibility left from their backcourt, Capel and the Panthers need to strike while the iron is hot unless Capel notches a few more high school recruits to roster.

The Panthers’ success is contingent upon the progression of their new forwards along with the leadership and scoring ability of their guards. With two scholarship positions left to fill, a strong defensive presence in the backcourt should remain a point of emphasis for the Panthers to add before the 2022 season begins.

For the first time in seemingly forever, Pitt basketball fans can be optimistic about the team Capel is expected to put out on the floor for the 2022 season — and it still has the potential to get even better in the coming weeks.