The Pitt News • May 25, 2022 • https://pittnews.com/article/173634/arts-and-entertainment/pittsburgh-based-record-label-holds-first-maple-house-music-festival/ 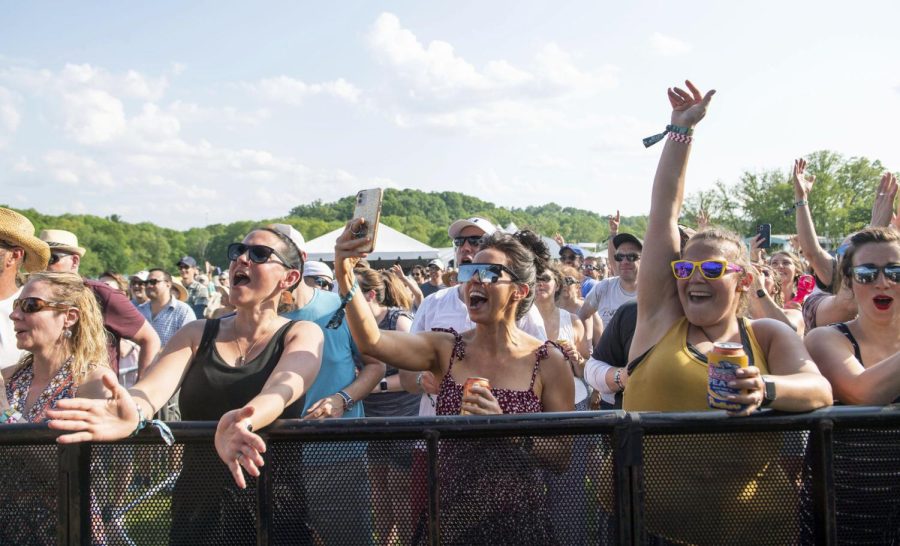 Fans cheer as Elle King performs during the Maple House Music and Arts Festival at Hartwood Acres Park on Saturday.

By Bella Markovitz, For The Pitt News

Hundreds of music lovers congregated at Hartwood Acres Park for the first-ever Maple House Music and Arts Festival this past Saturday. Popular headliners such as Jason Isbell & the 400 Unit, Black Pumas and Pittsburgh’s own Ghost Hounds drew large crowds eager to enjoy a day of fun, sun and music. With the help of the Elevation Festivals group, the Pittsburgh-based Maple House record label organized an exciting single-day event, jam-packed with 13 different musical acts between two stages.

Besides the music, attendees enjoyed the numerous food and concession stands, vendor booths and even a makeshift spray painting wall made of wooden panels. Among the businesses were experienced festival vendors, such as Wander & Co., a Milwaukee-based social cause shop that travels to festivals all over the U.S. selling T-shirts, fanny packs, dog collars and more.

There were several local vendors as well, including Donna Hetrick of Fireborn Studios, a pottery studio located in the South Side. Other booths included a voter registration booth and a booth for This Must Be The Place, a nonprofit that tours various music festivals to hand out free Narcan.

Da’Lyn Bauman, president of Maple House, said the main goal of the festival was to bring awareness to local musicians.

“Our hope is that this festival inspires an even greater community around the local music scene rooted in rock and blues,” Bauman said.