The Pitt News • May 31, 2022 • https://pittnews.com/article/173674/sports/column-inconsistency-continues-to-keep-pitt-baseball-mike-bell-out-of-national-tournament/ 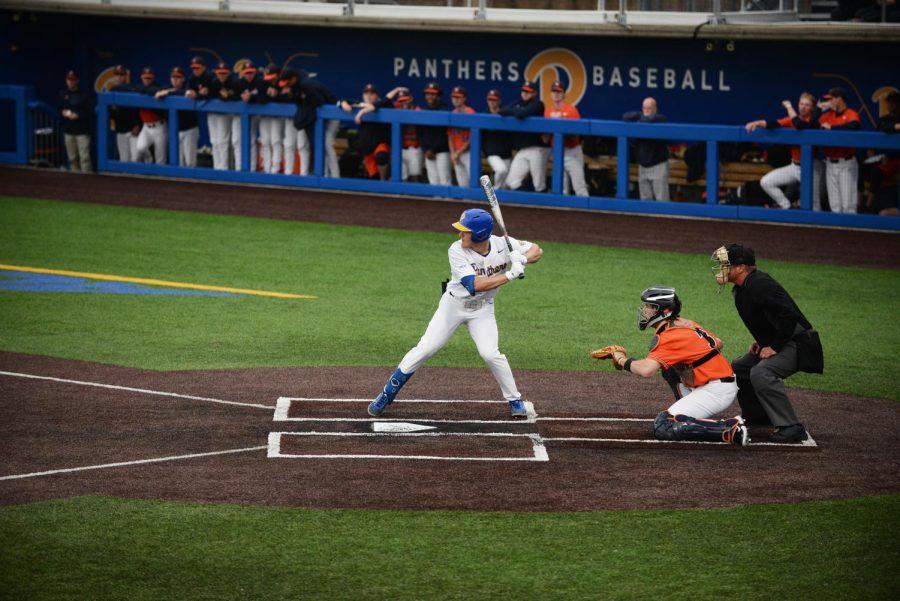 A Pitt player bats during a game against the University of Virginia in April.

The Panthers finished the season with an overall record of 29-27 after a loss to NC State in last weekend’s ACC Tournament semifinal ended their season.

Pitt baseball experienced some very high highs and also saw some very low lows. The Panthers had a magical conference tournament run alongside a few huge regular season wins over top 20 teams such as Miami, Louisville and Virginia. On the flip side, they also dropped games to the likes of Bradley, Canisius and Youngstown State. The main reason Pitt couldn’t break its NCAA Baseball Tournament drought — one that dates back to 1995 — was its inability to find rhythm.

Pitt had a talented ball club. Pitt had nine different hitters who finished with an OPS over .800 — including junior catcher Tatem Levins and junior outfielder Kyle Hess, who both finished the season over the 1.000 mark. The Panthers also had two All-ACC starting pitchers in senior Matt Gilbertson and junior Billy Corcoran.

But the Panthers lacked quality depth — especially in the pitching department. Outside of Gilberson and Corcoran, just one pitcher on the roster finished the season with an ERA below 5.00. The Panthers team ERA ranks at No. 197 in the country with an abysmal 6.19.

That’s not great, especially when a team has postseason aspirations.

This was their Achilles heel, and the reason Pitt underachieved all season. Thankfully, as the regular season ended, a new season began. Pitt had a clean slate and still had the chance to make the NCAA Tournament. But the Panthers likely needed to win the tournament to secure an automatic bid to the national tournament, with chances for an at-large bid slim to none.

Pitt entered the ACC Tournament losers of eight of their past nine games — including losing three games to Georgia Tech to conclude the regular season. The No. 11 seeded Panthers matched up with the Yellow Jackets for a fourth consecutive meeting in the tournament opener, where the Panthers prevailed 12-6. Gilbertson had a rare poor outing, but the offense picked him up with eight runs coming across in the sixth led by senior outfielder Ron Washington, Jr.. The senior kickstarted the inning with a no doubt moonshot then followed it up with an RBI single later in the same frame.

Pitt advanced to play the No. 2 seed Louisville Cardinals — who came into the game sitting at No. 7 in the nation — the following day. Pitt got out to an early lead thanks to a two-run bomb by senior infielder Jeff Wehler, before quickly falling behind 4-2 in the fifth. But just as the day prior, the Panthers never wavered and continued to fight.

Heading into the bottom of the eight down by one run, the Panthers pushed across a run to tie the game. Fast forward an inning later with the score tied, senior first baseman Bryce Hulett stepped in with the bases loaded and a chance to bring Pitt baseball one step closer to history. He delivered.

That’s a moment the Panthers will never forget. But at the same time, Pitt had to flush these emotions quickly because it needed to shift its focus to the tournament semifinals against the NC State Wolfpack.

In a curious decision, Pitt decided to start sophomore Logan Evans — who gave up six runs over three innings. The Panthers could’ve gone with Gilbertson on short rest, but opted not to. Coming into this tournament, everybody in that dugout knew they needed to go the distance to extend their season. In a game of that magnitude, it doesn’t make much sense to stray away from your most consistent pitcher.

The Panthers’ tournament run encapsulated their season. Even at times when they didn’t have their best stuff, their top two starters kept them in games and gave them a chance to win. After that though, there was never any real consistency.

Pitt manager Mike Bell has done a great job rebuilding the Panthers and bringing them back to national relevancy. But at some point you have to take the next step. Many Pitt fans feel like Bell should already have an NCAA Tournament appearance under his belt after a 2021 season that consisted of 17 Quad I wins — the fourth most in the country.

But the Panthers ended the season on a sour note, losing eight of their last nine games. They left the decision in the hands of the committee. This year’s team couldn’t punch its ticket into the dance after an underwhelming season.

It sounds simple, but in order to break the drought, Pitt baseball needs to be consistent. Up to this point in Bell’s tenure, it has been anything but. In order to change their fortune down the road, they can’t leave any doubt in the committee’s mind.