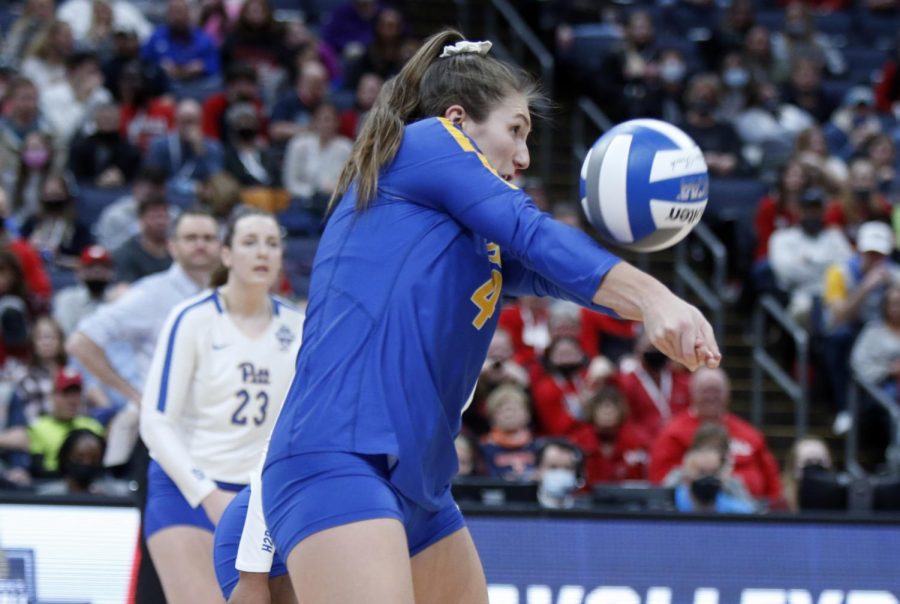 Pitt’s Ashley Browske (4) hits a pass during a semifinal of the NCAA women's college volleyball tournament against Nebraska in December.

The U.S. Women’s U21 National Volleyball team captured its second Pan American Cup on Sunday, knocking off Argentina 3-1 at La Paz Arena in Baja California Sur, Mexico. The team dropped just two sets on their way to a 5-0 tournament sweep. The last time the U.S. claimed the Pan American Cup was in 2017.

Pitt volleyball head coach Dan Fisher led the U.S. squad after being announced as head coach of the team on May 2. Fisher said he was thankful for the opportunity and excited to see how the players would perform.

“I am honored to be asked to lead the U.S. Women’s U21 National Team this year,” Fisher said. “I’m grateful for the trust that Karch Kiraly and USA Volleyball are putting in me and my staff. I’m excited to work with some of the best players in the United States in this age group and hope to represent this country with pride.”

Alongside Fisher, Pitt sophomore setter Rachel Fairbanks was one of the 12 players representing the USA in Mexico and started every game in the tournament under Fisher.

The U.S. swept Chile in their first game of the tournament, with Fairbanks leading the attack. The Panther boasted a .712 hitting percentage in the contest. She also tallied four aces and a block in the contest. The team’s attack struggled to find their momentum from the first game, but still swept Canada despite only hitting .257.

Fisher and his team knew the match with Argentina was going to be their toughest test of the tournament — but his team stayed consistent, taking the match 3-1 and advancing from pool play undefeated. Fairbanks again had a strong match, posting three aces and one kill while setting the U.S. to a .288 hitting percentage.

The U.S. handled Chile with ease in the semifinal match, notching its third sweep of the tournament in dominating fashion. Argentina took care of Mexico in four sets, setting up a pool play rematch for Fisher’s squad in the gold medal match. Fairbanks set the offense on fire, leading them to a .493 hitting percentage while notching three points of her own.

Once again, the U.S. defense prevailed against Argentina, holding them to a miniscule .123 attack percentage. Fisher said he thought the players came out of the gate nervous but settled down and managed Argentina’s strengths.

“I think the players were feeling a little tense for a while, but we worked through it and settled down in our reception,” Fisher said. “We also got some nice energy from players coming off the bench and ended the fourth set playing good volleyball. Argentina is very good and put a lot of stress on us with their serves, but that’s what good teams do.”

Florida sophomore opposite Merritt Beason won MVP of the tournament under Fisher’s guidance.