Review | ‘Crimes of the Future’— to feel beyond pain 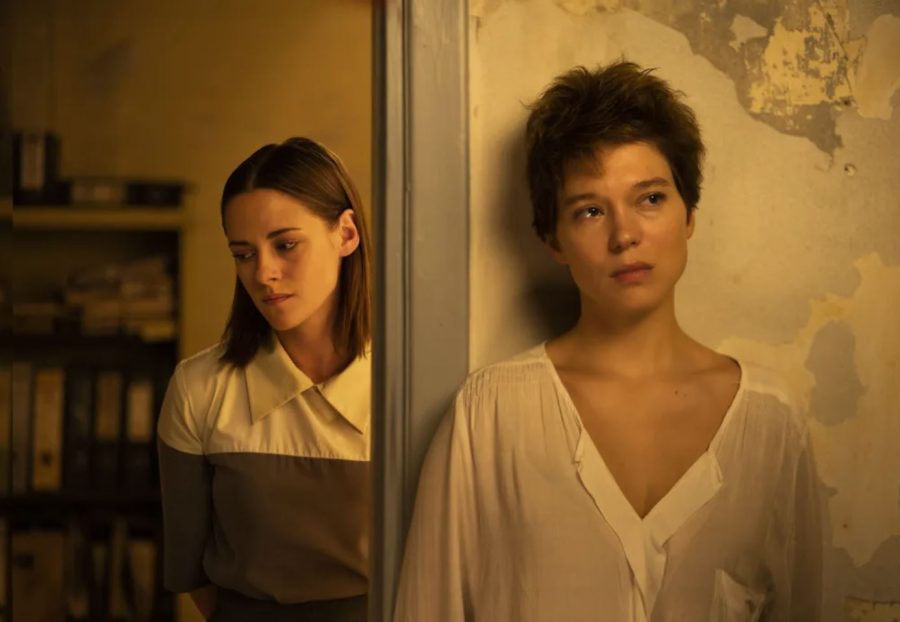 Kristen Stewart, left, plays Timlin alongside Léa Seydoux, who plays Caprice, in “Crimes of the Future.”

In a world without pain, there’s hope in David Cronenberg’s return to horror.

In his first film since 2014, and his first body-horror since 1999’s “eXistenZ,” Cronenberg has once again returned to his roots. Set in a not-so-distant future, the famed director imagines a world where humanity has polluted and corrupted the environment to a point where organic machines are necessary to stimulate and regulate even basic bodily functions. But that isn’t all.

“Crimes of the Future” introduces viewers to a world without pain — which disappeared alongside infectious diseases long ago. A place where celebrated artists like Saul Tenser (Viggo Mortensen) and his partner Caprice (Léa Seydoux) experiment on their bodies in front of a ravenous performative art scene.

Saul, the canvas to Caprice’s brush, grows tumors within his body due to a condition known as accelerated evolution syndrome. These strange organs are then tattooed and removed in front of live audiences by Caprice in warehouses and cellars — a reference to the underground performance art scene of the 70’s and 90’s. In these venues, attendees marvel at the pair’s genius as if they were the second coming of Picasso or Warhol. These performances give rise to carnal desires buried deep within the psyche of the unfeeling masses and are seen as sexual, carnal acts by many.

Cronenberg’s world is both like and unlike our own, with streets paved in garbage, littered with people and graffiti, and where dilapidated boats sleep eternally on its beaches while plastic rises like sand all around. The homes are sparsely decorated and ill-lit, reminiscent of a war-torn world. Even official government offices are little more than dust-covered caricatures of normality.

The technology, likewise, is alien. Machines made of bones and organic materials mixed with wires and buttons help people chew their food, throwing them about to ease digestion. Beds suspended from the ceiling and plugged into the body with almost-living cables ensure proper and peaceful sleep. Strange boney arms hold scalpels and clamps to perform the surgeries hundreds come to watch.

On the surface, “Crimes of the Future” sounds self-indulgent, a film that desires to make the viewer squirm and writhe in their seats while a man with ears grafted to his body dances in a loincloth. But the film is more than “Hellraiser” with science fiction elements. Instead, it begs the question of how far humanity would go to not only deny its evolution, but to suppress it.

This question is posed at the beginning of the film, though the viewer will perhaps not like the initial answer which carries its repercussions throughout the lines of blood and surgical performances. While the rest of the world amuses itself with pain, there exist people who seem to have changed. Developed in a way that can only be described as revolutionary, even necessary. And yet, they are hunted by a mysterious government police agency, represented by Detective Cope (Welket Bungué), which seeks to destroy them.

The film, which breezes by at a mere 107 minutes, is driven by spectacular performances by stars Mortensen, Seydoux and Kristen Stewart, who plays a nervous bureaucrat for an agency known as the National Organ Registry. Mortensen in particular gives life and dimension to a complex character who lives a sort of double life and seems both at odds with his art and enthralled by the danger of it. Even minor characters like technicians Berst (Tanaya Beatty) and Brecken (Sozos Sotiris) shine in the weird and almost lustful way they speak about the technology they repair. In truth, it is this commitment to the world that makes the film special.

Despite the state of the world and general feeling of hopelessness, Cronenberg’s film is surprisingly hopeful. Like his past works which explored the vulnerability of the body, “Crimes of the Future” explores familiar ground but ends without the usual melancholy. Instead, Cronenberg ended the film with a transcendental realization rather than a bitter curtain, a scene which again shows the acting talents of Mortensen and the raw storytelling capabilities of the now 79-year-old director.

Ultimately, “Crimes of the Future” will not be for everyone. The violent and uncomfortable pleasure the characters take in their actions is not for the faint of heart, nor are the casual ways in which they behave with their bodies. But for those who can endure these macabre scenes, there is underlying beauty — an emotional and tender story about human connection, physical and beyond, which begs to be seen and appreciated.