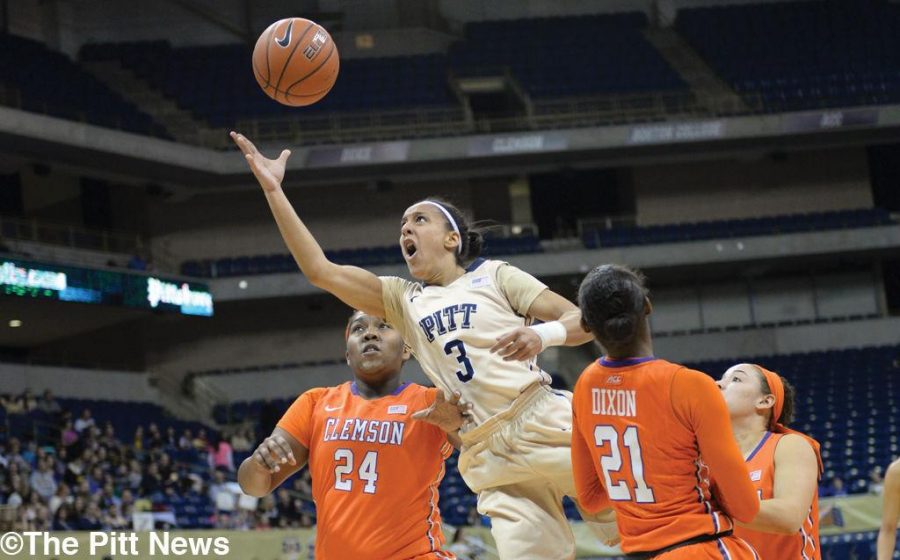 Three Panthers took their final shots as college athletes at home on Sunday. But, for much of the game, it seemed as if their final home game would result in a loss.

The Pitt women’s basketball team (19-10, 9-7 ACC) sent off seniors Brianna Kiesel, Cora McManus and Monica Wignot with a 61-56 win over the Clemson Tigers (9-20, 1-15 ACC) in their last regular season contest on Senior Day at the Petersen Events Center.

Kiesel, who passed Mercedes Walker for fifth on Pitt’s all-time scoring list with 1,884 career points, has spent much of her four years at Pitt on the losing end of games. But this regular season ended with much more success than past seasons, including the comeback win on Sunday.

“To leave here on a win definitely feels good,” Kiesel said. “The University of Pittsburgh has been phenomenal to me, so just to be able to come out here and get a win in our last home game of our senior year really feels special to us.”

Kiesel was quick to praise head coach Suzie McConnell-Serio and cites her coaching as the reason Pitt achieved what it did this season: a possible NCAA Tournament berth.

“[I knew this type of season was possible] when coach got here,” Kiesel said. “She’s just done everything that you could possibly want from a coach. It only took her two years to give us a chance to go to the postseason, and I think that says a lot about what kind of coach she is.”

McConnell-Serio has led the Panthers to exceed all expectations this season after facing the challenge of a projected last place finish in the ACC, and she credits her seniors for playing a large role in the team’s unexpected success.

“When you come in and take over a program, you immediately go to the upperclassmen to establish leadership,” McConnell-Serio said. “I couldn’t have asked for a better group in my second year to be leaders on this team, not only for what they bring on the court, but more importantly what they bring off the court.”

Pitt started cold on Sunday, entering the second half down by eight. Kiesel started especially poorly in her final appearance in the Pete, shooting 1-8 from the floor in the first half for a lowly four points. While she finished with a team-high 22 points, that came off of an inefficient 5-of-21 shooting effort.

Knowing that a loss to a nine-win team might ruin Pitt’s hopes for an NCAA Tournament bid, McConnell-Serio tried to wake her team up at halftime.

“I jumped them at halftime,” she said. “I challenged them and attacked their pride a little bit. I talked about this season and just letting something special slip away, and we wouldn’t let that happen.”

The Panthers came out firing in the second half, led by Kiesel, who scored 18 of her 22 points to end her final appearance in the Petersen Events Center in an appropriate fashion.

Wignot finished with only three points, but she grabbed 10 rebounds in addition to three assists.

While Clemson led for nearly 30 of the 40 minutes in the game, Pitt used several short runs to retake the lead for good with just under five minutes left in the game.

Pitt clinched the seventh seed in the ACC Tournament with the win over Clemson.

“[The players] have bought into the underdog role that I instill every single time we step out on that floor, because every coach we’ve played against has picked us to come in last,” McConnell-Serio said. “It starts with these [three seniors].”

McManus said she enjoyed playing on a team that accomplished a winning season for the first time in her career.

“It’s been amazing,” McManus said. “It’s been even better to do it with this group of girls. Me and [Kiesel] have been here for four years, and it’s been a really long journey. To end on a high note is unspeakable, and it definitely makes me realize how much I’m going to miss this program and this city.”

Pitt will face the winner of N.C. State vs. Virginia Tech after receiving a first-round bye in the conference tournament. A loss in any game from here on out could mean the end of the Panthers’ unanticipated success this season.

“It’s been an exciting year,” McConnell-Serio said. “And I don’t want it to end.”

Pitt will play in the second round of the ACC Tournament on Thursday at 6 p.m.