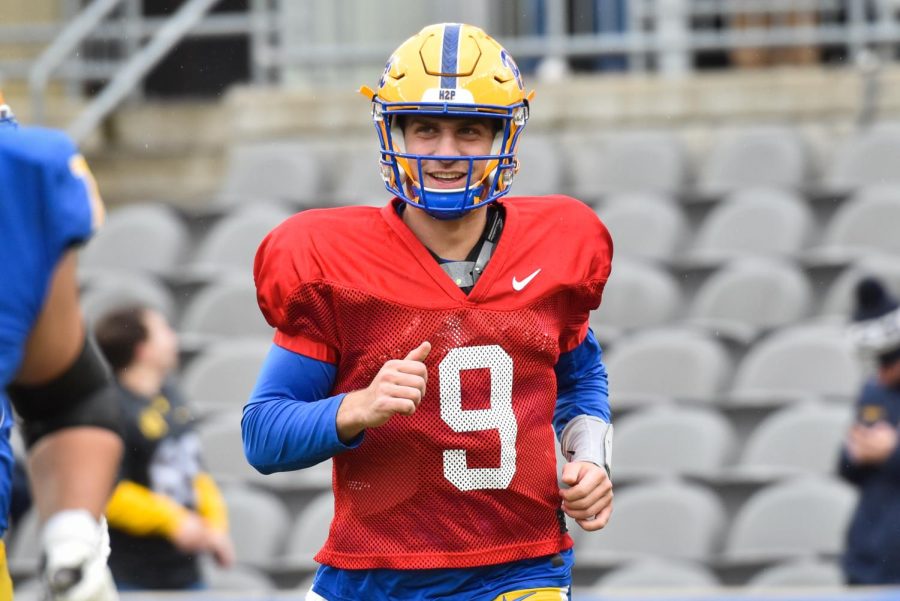 By Dalton Coppola and Richie Smiechowski

Head coach Pat Narduzzi held his cards close to his chest all of training camp when it came to answering any questions about who his starting quarterback is. Narduzzi broke his silence on the matter on Wednesday morning and named redshirt junior Kedon Slovis the starting quarterback for the season opener against West Virginia. Narduzzi said the battle came down to the wire, but Slovis separated himself as “the guy” to lead the Pitt offense.

“We’ve got confidence in both of them but unfortunately the quarterback position is just one guy,” Narduzzi said. “With that, after long conversations with the staff, Kedon Slovis will be our starting quarterback here for the home opener next week.”

Slovis played his first three seasons at Southern California before entering the transfer portal last December. Slovis starred in his first-year season at USC, earning FWAA First-Team Freshman All-American honors. Since that standout season, he suffered a few injuries and lost the consistency he once had for the Trojans.

Slovis entered the transfer portal last December and announced his commitment to Pitt just a week later. Since joining the Panthers, Narduzzi said Slovis has performed even better than he and his coaches expected. Slovis said that coming into the offseason, he had confidence that he could win the starting job, but was still ecstatic when Narduzzi broke the news to him.

“When you go into [the offseason] you want to be named the guy,” Slovis said. “When coach announced it, it was like a huge shock and surprise because again when you’re in that position you kind of want to have that confidence and feel that way beforehand.”

Slovis ultimately beat out senior quarterback Nick Patti for the starting gig. Patti spent the last three seasons backing up Kenny Pickett. But the senior did start last season’s Peach Bowl game when Pickett decided to opt-out of the contest. Patti led a scoring drive on his second opportunity with the ball before leaving the game with a collarbone injury.

While Patti may not start week one, Narduzzi said Patti handled the decision well and he’s ready to help the team in any way he can.

“Nick Patti was the classiest guy in the world,” Narduzzi said. “Understood, gets it, smart, classy — just like you knew that Nick Patti would be. He’s a team guy. He understands — you gotta love Nick Patti.”

Slovis and the Panthers will start chasing another ACC Championship on Sept. 1 at Acrisure Stadium when they welcome the West Virginia Mountaineers. The game will kickoff at 7 p.m. and air nationally on ESPN.