Panthers playing to prove they’re ‘here to stay’ in 2022 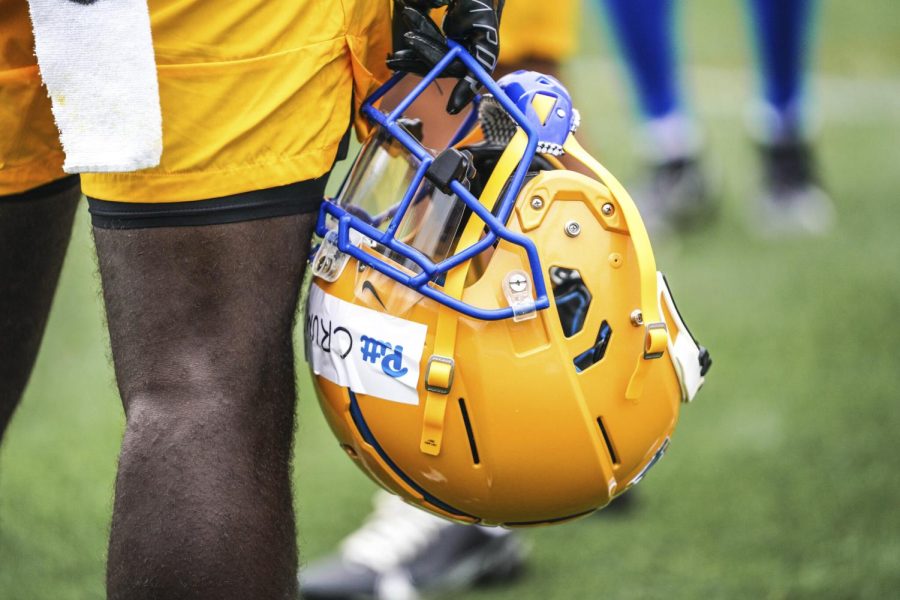 A Pitt football player holds his helmet at Pitt’s football training camp at the UPMC Rooney Sports Complex in August.

It’s a common platitude for someone to say “respect is earned, not given.” Not only is it cliche, but this isn’t always the case.

Pitt football knows this all too well. The Panthers went on an improbable run through the ACC last year and won their first conference championship. A vast majority of the starters from the 2021 team are back in 2022, putting the Panthers in a favorable position to repeat as champions.

Members of the media submitted their ACC pre-season polls, and just three of the 164 voters predicted Pitt to repeat as champions. Not only do the voters think that Pitt won’t win the conference, they also view the Panthers as underdogs to win the Coastal Division. Miami received 98 votes — 60 more than Pitt did — to win the Coastal.

While most of the time players and coaches say they don’t look at what the media thinks, plenty of Panthers conceded that they have seen the rankings. And according to senior corner Marquis Williams, he and some of his teammates find the rankings “disrespectful.”

“I don’t think that there’s respect there for us,” Williams said. “Because [the voters] wouldn’t have put Miami in front of us. Why would you all do that? It’s been a lot of stuff around the country going on, but we have the best players over here in the ACC. We just won the ACC Championship. I don’t think we’re getting the respect we deserve. I don’t know where it’s coming from, but I know Sept. 1 is a new start and a new season. We will prove why we’re the top team … we want to get into the playoff and the national championship.”

Similar to the voters in the ACC, the Associated Press released its rankings and the Panthers, who come in at No. 17, trail three teams in their own conference — No. 16 Miami, No. 13 NC State and No. 4 Clemson. While the AFCA Coaches Poll did rank the Panthers at No. 16 and one spot ahead of Miami, the Panthers still trail Clemson and NC State despite winning the conference last year.

Senior linebacker SirVocea Dennis said it seems like other schools get respect and that it does hurt a little bit when Pitt doesn’t receive that same praise.

“We don’t get enough hype in the media,” Dennis said. “We’re not worried about it. But it is nice to see it every once in a while. I know these guys work their tails off … for that to not get as recognized as other places, it takes a hit a little bit.”

In all fairness, the Panthers have lost a number of marquee players and coaches since the confetti settled. Heisman finalist quarterback Kenny Pickett departed for the NFL and Biletnikoff winning receiver Jordan Addison infamously transferred to USC. Not only did the star duo leave the program, but their coaches did too. Quarterback coach and offensive coordinator Mark Whipple along with receivers coach Brennan Marion left the program for the same job at Nebraska and Texas, respectively.

When one of the most prolific offenses loses arguably four of its most important pieces in the span of a few months, people are inevitably skeptical of the new unit’s potential. Head coach Pat Narduzzi went out and recruited some highly regarded coaches and players to fill these vacancies.

Frank Cignetti Jr. took over as the offensive coordinator and Tiquan Underwood took over the receiver room. Both have experience in the NFL — Cignetti as a coach and Underwood as a player. Narduzzi also added Kedon Slovis, a former first-year All-American quarterback and redshirt junior transfer from USC.

Pitt made headlines when it lost Addison to USC due to its timing and Addison’s status as one of the top receivers in the country. Narduzzi has also said he thinks that USC tampered with his receiver and illegally contacted Addison to offer him NIL opportunities in hopes to lure him away from Pitt. Underwood said it definitely hurt to lose his top receiver on the last day that Addison had the option to enter the transfer portal. But the new receiver coach said his players’ response to the highly controversial situation inspired hope in him.

“To get [texts] from some of the wideouts in the room saying ‘Coach, we got your back and we’re going to put in work and we’re going to make this thing happen,’ that meant everything to me,” Underwood said. “That just told me the type of character we have in that room. We know that we lost a talented player and great person, but it opens an opportunity in the room … we just gotta go out there and do our job.”

Slovis, the new guy on the block, also tweeted out a simple message —“culture wins.” Some saw this as a slight to Addison, but Slovis clarified that all he meant was he felt Pitt’s culture is what makes the Panthers’ team so special.

“I think [the tweet] got misconstrued a little bit as a slight [toward Addison], but it wasn’t,” Slovis said. “It was more so saying that regardless of who’s here, regardless of who’s in the building, what talent we have, the culture is what wins the games. We have a great culture here and we have great players — we’re going to be just fine.”

It isn’t uncommon for college football teams to have a disappointing season following one in which they reached new heights. Take the 2019 LSU Tigers, for example. The Tigers went 15-0 and won the National Championship in 2019 and many consider the team as one of the greatest college teams ever. The following two years, LSU went 5-5 in 2020 and 6-7 in 2021, falling back to college football purgatory.

Senior defensive lineman Habakkuk Baldonado acknowledged that Pitt hasn’t been very successful in recent history. But the senior hopes that if the Panthers can string together a few successful seasons, then maybe the media will start taking them seriously.

“Respect is something that you have to earn,” Baldonado said. “For a long time we have not won a lot of games, but now that has changed. Hopefully, we’re going to go on a long streak of having winning seasons … as good as last year was, it was one year. Clemson has won multiple years, and they gained respect out of that. That’s what we’re going to have to do the next couple of years.”

Members of the media have made it clear — they don’t think the Panthers have a program that is sustainable. Baldonado said whatever people think “doesn’t matter” and all that matters is which team is hoisting the conference championship trophy in December.

“Last year was one year, but we did win the whole conference, we did beat Clemson,” Baldonado said. “Not much has changed. We returned most of the players that did that last year. People can think whatever they think … it doesn’t matter, it’s preseason. We’re going to see in December who’s still standing.”

The Panthers have their first opportunity at earning respect in the Backyard Brawl on Sept. 1. The West Virginia Mountaineers will make the trip to Acrisure Stadium to play in front of a sold-out crowd as the two teams renew their rivalry for the first time since 2011.