‘Fired up’: Despite long break, still no love lost in Backyard Brawl rivalry 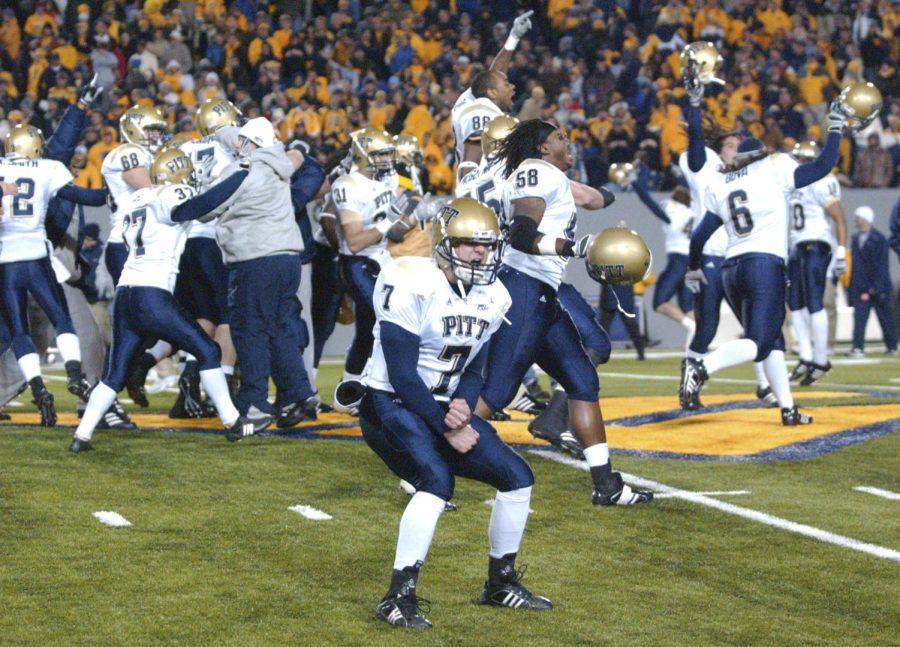 It’s no secret that Pitt and West Virginia don’t like one another. With their campuses lying just 75 miles away from one another, alumni and students from both schools commingle and cohabitate. The two fan bases used to clash nearly every season until 2011. But both programs left the Big East Conference, with Pitt going to the ACC and West Virginia heading to the Big 12.

The last time the two teams clashed on the gridiron was in 2011 — when most of the current players were in middle and elementary school. Most Pitt players have no reason to have any disdain for West Virginia.

But it seems the Pitt coaches are making a point to make sure their players know how much this game means to both of the fanbases. While he had no previous hatred for the Mountaineers, senior linebacker SirVocea Dennis said part of the duty that comes with playing for Pitt is having a distaste for its rivals.

“Once we put this [logo] on our jerseys and that Pitt script on our helmets, whoever they say we don’t like, we don’t like,” Dennis said. “It’s not hard to generate that hate at all. Once we get in between those lines, we’re ready to go no matter who it is. When it’s a rivalry game, we get fired up even more.”

Some players have taken to social media to show their display of hatred for the Mountaineers. Senior defensive lineman John Morgan III is leading the charge with his smack talk towards the Mountaineers, even likening them to his children in a tweet on Father’s Day.

Happy Father’s Day To Me ! I Miss My All My Kids Over There In Morgantown @WVUfootball 😢 Only 74 Days Until We Are Reunited ! Until Then It’s Hail 2 Pitt #H2P pic.twitter.com/G54mn54Wc3

While nobody on the current Pitt team has ever played in a Backyard Brawl, some have had more exposure than others. Senior linebacker Brandon George said when he was younger he came to Pittsburgh for a Backyard Brawl. While he can’t remember exactly which game it was, he said the atmosphere was one he’ll never forget.

“I’m from Eastern Pennsylvania and I didn’t grow up a Penn State fan and I didn’t really grow up a Pitt fan either,” George said. “There was a point in my life where I was about six or seven [years old] and I came to a Pitt-West Virginia game, and I’ll never forget the vulgarity and the craziness that ensued. That felt like how college football should feel. I’ll never forget that feeling ever and it’s always stuck with me. I remember telling my mom how I said ‘this is where I want to go to school.’”

Unlike George, senior quarterback Nick Patti is among the majority of players who have no real connection to the rivalry. Hailing from North Jersey, the quarterback has no real reason to dislike the Mountaineers. But Patti said members of the program have already warned him that the rivalry is a contentious one.

“I knew nothing at all about the Backyard Brawl,” Patti said. “When I first got here it was all about the Penn State rivalry, because they were playing them. Then, when we finished up with that [rivalry series] I was like ‘what’s up with this West Virginia rivalry?’ and they said it’s worse.”

Patti hasn’t seen any of the bitterness first-hand just yet. But he said based on the stories he heard from a couple of Pitt’s former players he’s prepared for the worst.

“[I have been] hearing some of the stories from the older guys like [former Pitt quarterback] Pat Bostick telling me stories and hearing about [former Pitt running back] LeSean McCoy when he was here,” Patti said. “[Opposing fans] threw bricks at the buses and dads handed kids beer and throwing them at the buses. It’s exciting to see that there’s that much hatred. It’s exciting to see how much the fans really care about it. It’s going to be a lot of fun on Sept. 1.”

Pitt started competing in the ACC in 2013, joining a conference made up of teams that the Panthers didn’t have much history with. The ACC is a conference that lacks true rivalries. Sure, there are teams that don’t necessarily like one another. But the conference lacks historic rivalries between teams that have played against one another for decades.

When Pitt was in the Big East Conference, the Panthers took on West Virginia annually. The rivalry took a hiatus after both teams left the Big East. But the two athletic departments came together to schedule this out of conference series.

While Pitt has played in games with an intense atmosphere before, the first Backyard Brawl in more than a decade may top them all. Acrisure Stadium is entirely sold out of seats for the game, and Pitt even sold a limited amount of standing-room only tickets in response to the high demand. Dennis said he and his teammates are ready to see an atmosphere they’ve never seen before and are preparing accordingly.

The Backyard Brawl will make its return to the gridiron on Thursday night, with kickoff scheduled for 7 p.m. at Acrisure Stadium. The game will air nationally on ESPN.