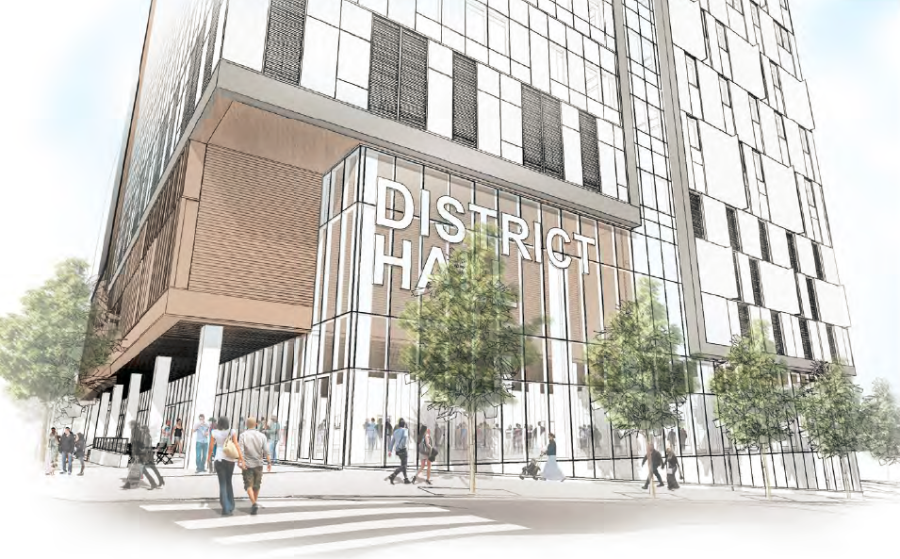 A rendering of the proposed construction at 3440 Forbes Ave.

The three-judge panel affirmed a previous Allegheny County Common Pleas Court decision in their August 1 ruling that permitted developer Wexford Science + Technology to build up to 153 feet at 3440 Forbes Ave. Pittsburgh’s Zoning Board of Adjustment previously denied Wexford Science’s bid to extend beyond the zone’s 85-feet base height in 2019.

“Why bother having a zoning ordinance or a zoning board when courts can overturn the decision?” Mitchell said.

Wexford Science cited the 128-feet Hilton Garden Inn Hotel, which sits on the adjacent lot, as part of their justification for exceeding the base height. Under city code, developers may build between a zone’s base height and the height of properties on adjoining lots.

The city code also notes that a building must be “oriented” on the same side of the street as the subject lot to be considered for contextual height, a qualification that community groups and residents contested that the 128-feet hotel, with its entrance facing McKee Place, failed to meet.

The panel rejected this argument.

“Contextual height does not depend upon the location of the neighboring building’s front door but, rather, on the orientation of each lot,” Senior Judge Mary Hannah Leavitt wrote for the judges panel.

The court also entitled Wexford Science to a 20% height bonus for pursuing a Leadership in Energy and Environmental Design certification. Pittsburgh’s Zoning Board of Adjustment originally denied the bonus, but Common Pleas Judge James Joseph later reversed this on Oct. 19 and allowed the building to extend another 25 feet for a total height of 153 feet.

Wexford Science did not respond to requests for comment on the court’s decision. The developer plans to raze the unoccupied Murdoch Building for the project, which would include street-level retail and lab space in addition to office space.

Community members have pushed back against the proposed building for years.

Wexford Science’s original plans to reach 188.6 feet on the lot came under fire during a 2019 zoning board hearing, where opponents said the building would detract from Oakland’s character and place additional pressure on already scarce parking.

As Wexford Science appealed the board’s subsequent rejection, the developer reached a settlement with Oakland Planning and Development Corp. and the City last year to limit the building’s height to 153 feet after signing a consent order issued by Judge Joseph. The order also required Wexford Science to provide a community benefits package, including a $400,000 payment to OPDC and an annual payment of up to $35,000 toward the organization’s Oakland Community Land Trust.

Other concessions from Wexford Science include $100,000 for helping seniors in the neighborhood with home repairs and an annual payment of $2,500 toward residential parking permit enforcement.

Oakcliffe Community Organization and the three residents involved in the Commonwealth Court case are challenging the settlement in the Common Pleas Court with representation from Mitchell, arguing that the City, OPDC and Wexford Science colluded to skirt zoning laws.

The complaint filed by the plaintiffs alleges that OPDC repudiated previous sworn legal testimony against the project in exchange for a total of $1.22 million in payments to the organization.

“This case presents the important public policy issue of whether variances are for sale in the City of Pittsburgh and whether the City can lawfully be a party to an illegal contract and consent order between Developer and former objector OPDC which allows Developer to purchase a variance from the City of Pittsburgh by paying OPDC $1.22 million,” the complaint alleges.

According to OPDC’s website, they chose to pursue a settlement to prevent Wexford Science from outright winning their appeal and building to their desired height of 188.6 feet.

“OPDC is proud of this transparent, community-focused resolution to protracted litigation,” the organization wrote. “OPDC’s priority is the residents of Oakland, especially those lower-wealth individuals who can be left behind when development pressure raises prices in the neighborhood and squeezes people out of opportunity.”