Takeaways from the Backyard Brawl | Slovis is the guy, don’t panic about the run defense 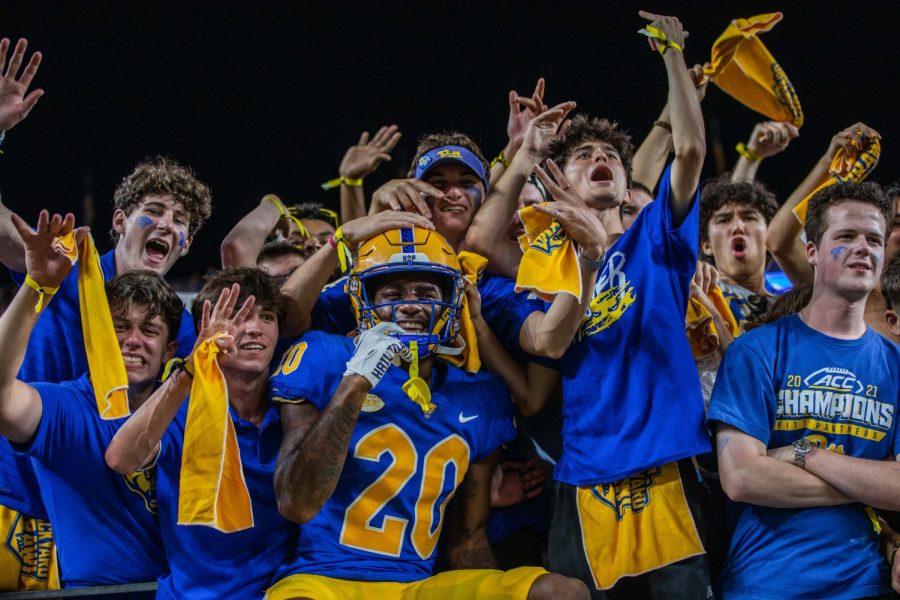 The 2022 rendition of the Backyard Brawl lived up to the hype. Both programs waited 11 years to renew this rivalry and the game may go down as one of the series’ most classic games.

The game had it all — a back and forth slugfest between two teams who really don’t like one another, the largest crowd in Pittsburgh sports history at 70,622 and a late fourth-quarter pick six to seal the deal.

Pitt won 38-31 in dramatic fashion, with senior defensive back MJ Devonshire running back an interception for a touchdown in the game’s final minutes. Devonshire plucked the fluttering pass from the air, weaved his way through the sea of Mountaineers, pointed to the Panther Pitt and Acrisure Stadium erupted so loud that the pressbox swayed. That play will go down as one of the most iconic in the history of the brawl.

But there’s plenty more than just that play to break down. Here are some takeaways from Pitt’s first win of the season.

College sports, football in particular, have truly become a money-grab in the last few years. Teams are fleeing their conferences to sign lucrative television contracts and abandoning the traditional rivalries that make college football so great.

Pitt and West Virginia showed why we need to keep rivalries like this around.

The game at Acrisure Stadium was the biggest crowd in the history of Pittsburgh sports. In a town that thrives off of its sports teams, no game in the city’s history had more people in the building than the 2022 Backyard Brawl. Mountaineer fans took day trips, Pitt fans took off of work and students lined up for hours to see their team play. Head coach Pat Narduzzi said the energy from the fans played a huge part in the victory.

“First of all, you know, let’s just start with the fans in that stadium today,” Narduzzi said. “That place was electric. Pitt fans showed up, like, big-time. Was kind of real upset the night before when we heard there was going to be 75% West Virginia fans, which I knew ESPN had some bad facts. But they disrespected our fans and our fans showed up. They were unbelievable all day today, so I thank them first of all because they were critical in the victory.”

That’s what college football is all about. Schools are always going to take the money, at the end of the day. But do us all a favor, keep traditional and geographic rivalries intact.

Kedon Slovis is the guy

Kedon Slovis didn’t blow Pitt fans away with his performance against West Virginia. Some fans even brought up replacing him with Nick Patti after the offense began to stall. But Slovis did exactly what he needed to do to win the game. He wasn’t perfect by any standards. But he threw for over 300 yards and didn’t turn the ball over — that’s a recipe to win football games.

Slovis has things to clean up, of course. He showed poor pocket awareness against the Mountaineers, leaving the pocket when he didn’t need to and taking a few drive-killing sacks. But it was the first week of the season, and Slovis was knocking rust off after a long break.

Pitt fans are coming off of a year where they had one of the best quarterbacks in the country. Kenny Pickett broke records, played with poise and dominated almost every single defense he faced. But most college quarterbacks don’t do that — there’s a reason Pickett was the first quarterback off of the board in the 2022 NFL Draft. If Slovis can play half as good as Pickett did, Pitt is in great shape.

Narduzzi said he didn’t like how many sacks Slovis took, but otherwise he thought his new quarterback had a solid game.

“You know what, I thought he was a little late with the ball at times,” Narduzzi said. “16-of-24, pretty good. I think one TD, five sacks, don’t like the sacks but we’ll look at that. Why and what [happened on the sacks]? Don’t like the sacks at all.”

Slovis did exactly what he needed to do to win the game. Not to mention, he completed all five of his passes for 73 yards on a game-tying drive in the fourth quarter. As long as Slovis is winning ball games, there’s no reason to change who Narduzzi puts under center.

Thursday confirmed many people’s suspicions that the offensive play calling in 2022 is going to look much different than it did in 2021. For better or for worse, new offensive coordinator Frank Cignetti Jr. is going to stack the line and grind out every single yard.

For a lot of the game, Cignetti marched out six offensive linemen, instead of the typical five, and left sophomore tight end Gavin Bartholomew bunched inside. Heck, Cignetti even used formations with a fullback.

Cignetti leaned on sophomore running back Rodney Hammond and the offensive line against the Mountaineers — and it worked. The Pitt offense put up 31 points and tallied 384 yards of offense and won the game. Cignetti aired it out when he needed to and stuck to his ground and pound strategy when it worked.

At the end of the day, Pitt’s offense looks different this year with Cignetti at the helm.

The defense’s struggles against the run are concerning, but fans shouldn’t panic just yet

West Virginia gashed Pitt for 219 yards on the ground. First-year CJ Donaldson, who is listed as a tight end, rumbled for 125 yards on just seven carries. The Pitt defense looked bad against the run on Thursday, specifically against zone runs.

The Mountaineer offensive line cleared holes on the line and made their way to the second level to neutralize Pitt’s linebackers. Junior linebacker Bangally Kamara had a couple of frustrating plays where he seemed to take a bad angle or just miss his assignment. The veteran in the linebacker room, senior linebacker SirVocea Dennis, said the missed tackles and long runs were a result of having a couple of younger players in the defense, but they’ll clean it up this week.

“I think that we have some young guys in there and new guys in our defense that need to understand what’s going on, what’s happening and how the other team is trying to attack our defense,” Dennis said. “Once we pick on that, with the season going forward, we’re going to be a very good defense.”

Narduzzi was very unhappy with the run defense after the game on Thursday and said he’ll make sure they clean it up before their next game.

“I’m hot, okay, I’m hot,” Narduzzi said. “That doesn’t usually happen. I’m not happy. I’m not happy about our run defense. We’ll get it cleaned up and see again. We have two young outside linebackers playing their first game. Probably SirVocea was good inside, but we’ll clean that up. That’s a fact. I’m in charge of that.”

The poor play against the run was definitely concerning, but it’s still too early to hit the panic button.

Pitt will take on the Tennessee Volunteers this Saturday and fans can see if Narduzzi lives up to his promise. The game against Tennessee will kick off at 3:30 p.m. at Acrisure Stadium and air nationally on ABC.