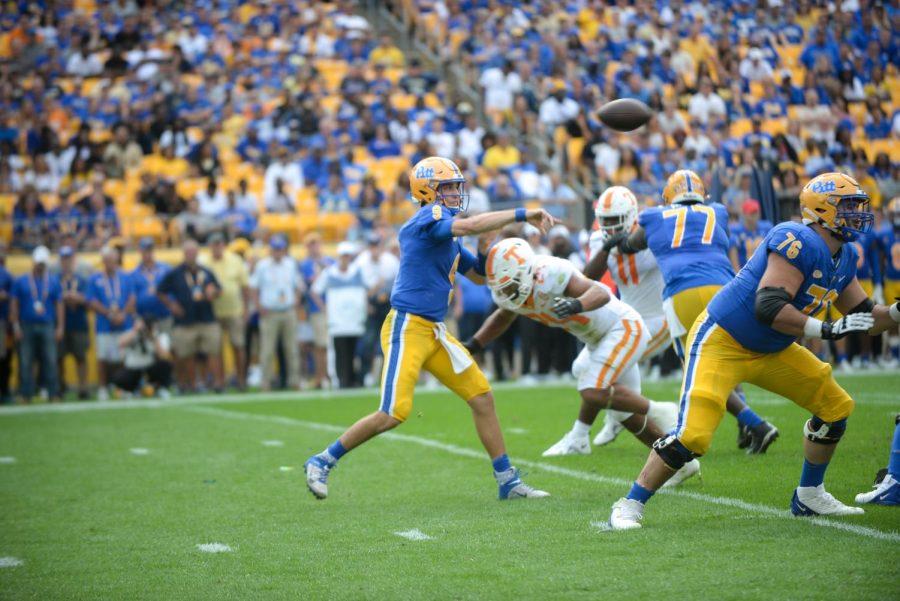 It seems Pitt football has a flare for the dramatics in 2022. The Panthers played their second straight one possession game Saturday against the Tennessee Volunteers. Pitt may have had things go their way in week one, but couldn’t get out unscathed in this one.

Amid a slew of injuries, the Panthers (1-1, 0-0 ACC) fell to the Tennessee Volunteers (2-0, 0-0 SEC) 34-27 at Acrisure Stadium. Head coach Pat Narduzzi said he was proud of the way his team continued to fight until the end.

“I love our football team and I love where they are,” Narduzzi said. “All of our goals are ahead of us, it’s a non-conference game… we’re going to get better. We’ll move on.”

Pitt won the toss and deferred to the second half, giving Pitt’s defense an opportunity to set the tone — and they did just that. The Panther defense had a near perfect opening drive, allowing no yards and forcing a Volunteer punt.

The Pitt offense capitalized on the early defensive success. Senior quarterback Kedon Slovis operated well out of the shotgun against West Virginia last week. Offensive coordinator Frank Cignetti leaned into his quarterback’s strengths and ran every play on the opening drive from the shotgun. Slovis completed four passes for 37 yards, as Pitt got on the board early with a field goal.

A couple of Pitt miscues forced Pitt to settle for three points on the opening drive, but it didn’t take long for the Panthers to get another opportunity. The defense forced yet another three-and-out and junior running back Israel Abanikanda refused to settle for another field goal. Abanikanda picked up a few blocks and did the rest, taking a handoff 76-yards for a touchdown — the longest Pitt touchdown run since 2018.

It seemed the Volunteers’ offense may not score all game after picking up less than 40 yards in their first three drives. But a Slovis interception in the endzone gave Tennessee enough momentum to get their offense going. The Volunteers capitalized on the Panther miscue and drove 80 yards for a touchdown to cut Pitt’s lead down to 10-7.

But Pitt had a quick answer of its own.

On the sixth play of the ensuing possession, Slovis connected with sophomore tight end Gavin Bartholomew along the sideline. Bartholomew hurdled a Tennessee defender and had nothing but green grass in front of him, taking it 57-yards for a Pitt touchdown.

All of the sudden, this one turned into an offensive slugfest. Tennessee promptly answered with a 10 play, 71 yard drive resulting in a touchdown.

Tennessee didn’t stop there. Pitt turned the ball over on downs in Tennessee territory and senior quarterback Hendon Hooker uncorked a 62-yard pass to set up another touchdown. With just less than five minutes left in the first half, the Volunteers put the Panthers on the ropes and took a 21-17 lead.

Slovis played under pressure nearly the entire first half. The Tennessee defense registered nine quarterback hurries before the half was over. The Pitt offensive line only allowed three hurries all of last week.

The last time the Volunteers got to Slovis in the first half was costly. With just 14 seconds left in the half, Slovis fumbled the ball and Tennessee fell on it deep in Pitt territory, giving them a chance to put more points on the board. The Volunteers took advantage once again and converted a 37-yard field goal to take a 24-17 lead into the half.

Not only did the pressure stall the offense, it knocked Slovis out of the game. When the Panthers came out of the tunnel for the second half, Slovis didn’t reemerge and senior quarterback Nick Patti entered the game to replace him.

The defenses traded stops to start the second half and it looked like the two teams had reached a stalemate. The Pitt offense wasn’t doing much at all in the third quarter. Despite a blocked punt setting up the offense deep in Volunteer territory, the offense picked up just two yards before a missed fieldgoal attempt.

The Tennessee defensive line got after Patti just like they did with Slovis. Patti went down with what appeared to be a leg injury, which was clearly impacting his mobility throughout the rest of the game. Despite the injury, he threw for 79 yards and a touchdown in the contest. Narduzzi said the coaching staff wasn’t planning on replacing Patti despite his lack of mobility after the injury.

“Nick’s a fighter, he’s a tough son of a gun,” Narduzzi said. “He made some great shots out there. Nick played well.”

Bartholomew said seeing Patti stay in the game fired up the offense as a whole.

“All the guys were fired up,” Bartholomew said. “We just kept telling each other ‘play by play.’”

Pitt did eventually manage to convert a field goal after a Tennessee fumble put the Panthers in favorable field position. But Tennessee once again matched it with a fieldgoal of its own, forcing Patti and the offense to score a touchdown in order to tie this one up.

After what appeared to be another three-and-out for the Pitt offense, the Volunteers handed the Panthers yet another chance. The Tennessee punt returner muffed the kick and Pitt recovered it on the Volunteer 39-yard line.

On fourth and goal from the four-yard line and his back to the wall, Patti threw under duress and found senior receiver Jared Wayne in the back of the endzone for a game-tying touchdown with just 2:23 left in the game. The Pitt defense picked up a stop on the ensuing drive to force overtime.

The Volunteers scored quickly in overtime on a 26-yard pass from Hooker, to put the pressure on Patti and the offense. Patti got the Panthers within striking distance, but ultimately fell short as he failed to find the endzone.

Pitt will have a chance to get back on track next week as they travel to Western Michigan next week. The game will start at 7:30 p.m. and air on ESPNU.