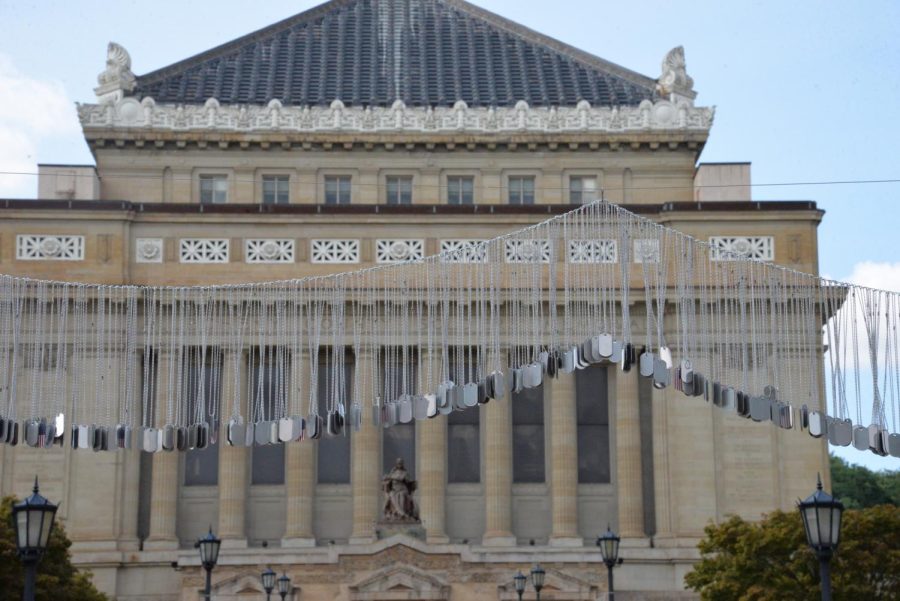 Dog tags hang outside of Soldiers & Sailors Memorial Hall and Museum on Fifth Avenue in 2021.

When people walk past Soldiers & Sailors Memorial Hall & Museum on a windy September day, they may hear the jingling of silver garlands hanging over the steps facing Fifth Avenue. Thousands of dog tags hang on display outside the building in honor of soldiers who lost their lives in the past two decades from conflicts overseas following the 9/11 attacks.

Tim Neff, the vice president and director of museum and education, said the display honors those who have served our country and their heroism.

“It’s very powerful,” Neff said. “It speaks to the sacrifice and patriotism that came out of 9/11 and those that were willing to serve.”

Soldiers & Sailors held its monthly “Spotlight On” virtual program on Thursday, and this month’s topic was the history of dog tags. Neff and Mickael Kraus, a curator and Civil War historian, spoke about the history and evolution of dog tags.

Kraus said there was no way to identify soldiers killed in action before the Civil War. He said this began to change after the government issued the dedication of the national cemetery at Gettysburg.

“The cemetery was a government project, so there needed to be a report file about how the money was spent and all the procedures,” Kraus said. “Samuel Weaver was the man responsible for that, and when they exhumed bodies on the battle for Gettysburg between July and November of 1863, he made careful notes about what the contents were in a grave.”

According to Kraus, if a soldier died in action, occasionally their comrades would mark their grave with a board with the soldier’s name or initials cut into it. He said vendors, called sutlers, would set up around Union army camps and sell an item called the McClellan tag, which was both a novelty item and a way to ease the fear of being unidentified. The tag is named after General George McClellan.

Kraus said the McClellan tag had a photo of General McClellan on the front and appeared blank on the back. A soldier’s information could be hand stamped on the back, but the poorly made pins that held the tags on caused many to be lost in battle. However, he said officials would sometimes recover the tags with the soldiers’ bodies and use them for identification.

Starting in 1863, Kraus said vendors also started to sell corps badges, a much more elaborate identification tag that contained what corps a soldier was in. He said corps badges didn’t identify individual soldiers, but they illustrated the helpfulness of such an item.

“This might have shaken the tree a little, they might have said, ‘This helps identify someone, it’s something that’s indelible, it won’t fall apart or break down. Maybe we should make something like that for soldiers that’s down to the individual level,’” Kraus said.

According to Kraus, the Army finally decided to individually identify soldiers in 1907, and came up with an aluminum disc about the size of a half dollar. He said the discs were stamped with a soldier’s name and service number, which were new to the Army. Each soldier carried two of these discs so one could be left with the body and the other collected for record keeping purposes.

Neff said the army started to use what would be considered a ‘modern dog tag’ during World War II. These tags contained a soldier’s name, service number and corps like before, but now featured religious information and blood type.

“You’re going to have a blood type, which is something that if you’re injured, you can’t speak and they’re dragging you into a field hospital for a transfusion is a very helpful piece of information,” Kraus said.

Neff also said despite the tags becoming more standardized during WWII, they often looked different from one another. By the Vietnam War, dog tags started to appear a lot more uniform, with most containing name, service number, religion and blood type. Neff said dog tags developed to feature tubing around the chain, typically made of plastic or rubber, to silence the sound of the chain on a soldier.

“They’re starting to look more similar, but you still aren’t going to say they’re all the same,” Neff said.