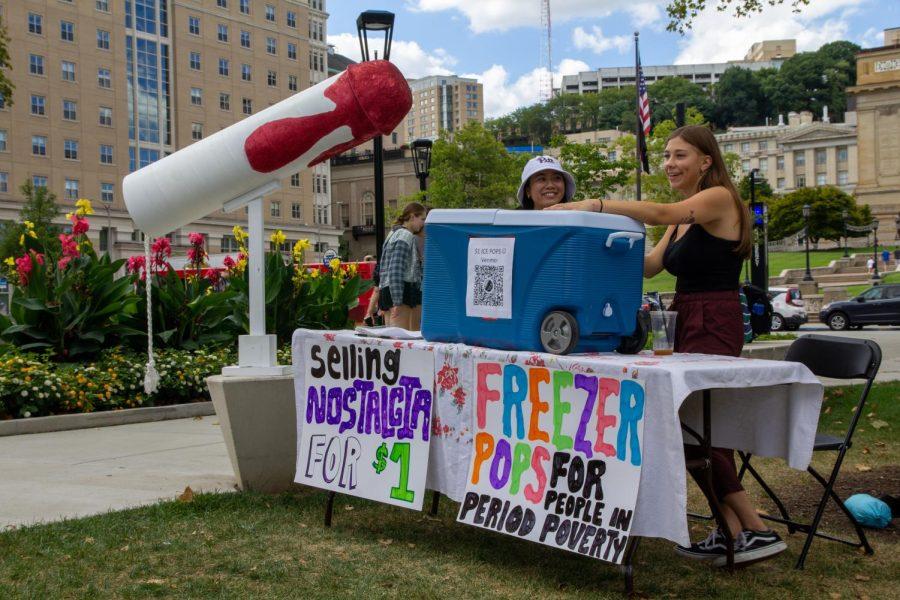 Pitt students selling “freezer pops for people in period poverty,” according to a sign on their booth, at the Pitt Arts Fest on the WPU lawn on Friday.

For sophomore studio arts major James Richardson, PittARTS Fest on Friday afternoon was his first-ever opportunity to sell his artwork.

“I’ve never done any display work and I’ve never sold anything yet,” Richardson said. “It’s an interesting idea to hear what people have to say about my work and what they think about it. It’s a very positive experience.”

Richardson is one student from the studio arts program who registered to sell his work at PittARTS Fest, where he sold four of his paintings featuring vibrantly-colored cartoon characters like Curious George and Hello Kitty, as well as colorful, fantastical naturistic scenes.

PittARTS Fest took place on the WPU lawn, where students enjoyed getting henna tattoos, a caricature artist, free popcorn, T-shirt printing and networking with local arts organizations like the Pittsburgh Cultural Trust and the Andy Warhol and Carnegie Art museums.

Richardson said as an artist, he focuses on nature scenes or common cartoon characters and puts his own spin on them.

“I started at a very young age with drawing, and then it kind of evolved into more mediums like painting and things of that nature,” Richardson said. “That kind of led me to choose a studio arts major at Pitt, which has been really interesting and fun.”

Richardson added his favorite piece on his table was an abstract firewall painting.

“It was really interesting and fun to make,” Richardson said. “I love the dark background with all the colors. It started out as a totally different idea, and then it just kind of evolved into that, but I still love how it turned out and the texture like the explosion effect was kind of hard to get, but I’m really happy with it.”

Annabelle Clippinger, PittARTS’ program director, said she thought the festival was a great way to let Pitt students know about the advantages of PittARTS, such as free or discounted admission to many performing arts shows or local museums.

“PittARTS is fantastic. We do a lot of free, wonderful things for students,” Clippinger said. “Our mission is essentially engaging students in arts and culture in the city of Pittsburgh. So that can be on campus, that can be off, but this event is great because people can just run into this while they’re going in between classes and make a painting or get some popcorn.”

The event also featured live music from the Boilermaker Jazz Band, which played 1940s-esque tunes as students danced on the lawn. Clippinger said she especially enjoyed the band because it brought students together to dance to old-fashioned music.

“Boilermaker Jazz Band has a great singer and they’ve got this sort of old-timey music that all the students were dancing to,” Clippinger said. “So our students really liked it. It’s really energetic and fun.”

Jayona Benson, a junior psychology major who works at PittARTS and was helping students press images onto tees during the festival, said PittARTS collaborated with many vendors to make the art festival happen, such as Calliope, the Kelly Strayhorn Theater and the Pittsburgh Opera.

Benson said she hoped the festival would inspire more students to get involved with PittARTS, because it changed her Pitt experience for the better.

“It definitely broadened my horizons because prior to coming to college, I had never seen an opera or really been to see a symphony,” Benson said. “PittARTS really just gave me more awareness of what goes on in the city and just the beautiful aspect of some of the music and performances.”

For the last hour of the PittARTS Fest, Clipphinger hosted a “color blast,” where she gave students the chance to toss colored powder on one another. Although few students participated, some left the festival covered in different colors from head to toe.

Benson said the festival was a great opportunity for students to familiarize themselves with Pittsburgh’s art scene.

“It can kind of open your eyes to what the city of Pittsburgh has to offer, it just broadens your avenues,” Benson said. “It’s also fun to get out there and you meet a lot of nice people. In terms of the arts community, it brings new faces that can come and appreciate it.”