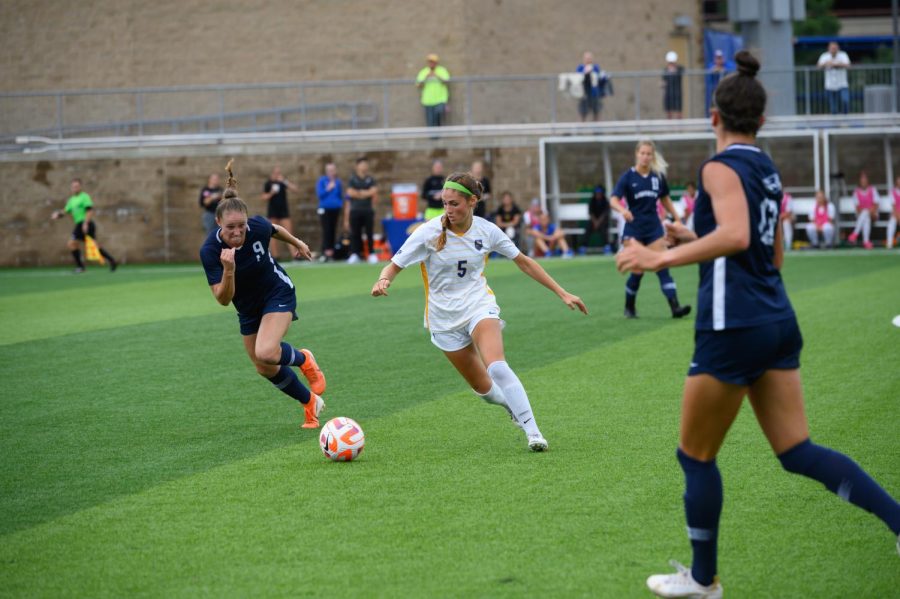 Pitt women’s soccer hosted Liberty University Sunday and defeated the Flames 3-2. Before the game, the Panthers honored their 11 seniors with a pre-game ceremony. Pitt recognized senior forwards Amanda West and Leah Pais and midfielder Landy Mertz during the ceremony.

Head Coach Randy Waldrum explained that this class of seniors are especially important to the program.

“This particular group of seniors came in in 2019, a year after us,” he said. “This is the first group that has changed this program from a 22-year losing one to a winning one.”

Pais also understood the importance of the honored seniors, including herself.

“Transfering here [from Albany] was one of the best decisions I ever made,” she said. “We’ve grown into seniors that can lead and can play well in the ACC.”

Pitt came into this one fresh off its first loss of the season, The Panthers fell in the waning minutes to VCU on a last-minute Rams goal. But for the first 10 minutes, the Panthers looked like they shook that loss off. They held possession and didn’t let Liberty so much as pass midfield. Sophomore forward Sarah Schupansky came close to breaking the ice in the seventh minute, but shot the ball over the net.

Despite the first-half pressure from the Pitt offense, Liberty only needed one chance to put the ball in the back of the net. A poor clearance from Pitt senior goalkeeper Caitlyn Lazzarini in the 11th minute led to first-year forward Ivy Gardner stealing the ball and pushing it past Lazzarini for the game’s first goal.

The Flames’ defense held the Panthers scoreless for the first half hour of play, but they finally broke through in the 30th minute. Mertz dug the ball out from the near corner in the final third, then crossed it to the six-yard box where fellow senior Pais was waiting. She headed the ball just past Liberty sophomore goalkeeper Ainsley Leja for the tying goal.

Both keepers had now allowed one goal apiece, but Leja kept her team from falling behind after Pais’ goal. Senior midfielder nutmegged her defender along the goalline in the 34th minute and passed to a wide open Mertz on the other side of the net. As Mertz one-timed it toward the net, Leja came across the goal just in time to parry the ball away.

But Pitt found the lead goal just four minutes later. After junior midfielder Emily Yaple saved the ball from going out of bounds for a goal kick, she fed Bout, who found a cutting Pais. The Albany transfer’s second shot of the game resulted in her second goal, her fifth in the last three games, and it gave the Panthers the 2-1 lead.

Waldrum said Pais’ ability to adapt to any situation has been key to her impact in the last week.

“She’s been fantastic,” he said. “She’ll play anywhere you put her and she never complains. Whatever she can do for the team, she’ll do it.”

By the time the halftime whistle sounded, the Panthers had outshot Liberty 13-2.

Pitt found an insurance goal in the 55th minute. Sophomore midfielder Ellie Coffield scored straight off a free kick to give the Panthers a 3-1 lead.

Pitt almost took a 4-1 lead in the 59th minute, but Leja again stood on her head. Mertz had a breakaway chance, but Leja came out of the net and challenged the shot. Sophomore forward Sarah Schupansky collected the rebound and shot it on goal, but Leja recovered in time to save that one too. She finished the day with six saves.

Liberty took advantage of those two saves and inched closer with a 64th minute goal. First-year forward Allison Hansford started the play with the first of three shots from point-blank range. Lazzarini saved that shot, and the second shot hit the left post. But the Pitt defense couldn’t recover in time for Hansford to collect the rebound, and she finally found twine to bring the Flames within one.

The Panthers still had the 3-2 lead, but according to Waldrum, they lost a little bit of their structure after the second Liberty goal.

“We made that game harder in the last 25 minutes than we needed to,” he said. “We were in control, then we made a turnover in the back and now we’re scrambling. So we need to be better at finishing these games off.”

LIberty continued to pressure Pitt in the last 25 minutes, but the defense held its ground. The Panthers put some shots on net in the 77th minute, but Leja made easy saves to keep the score at 3-2. In the 81st minute, Hansford forced a Pitt turnover and hastily shot one over the net. Despite the sloppy play in the last 25 minutes, the Panthers held on for the 3-2 victory.

The Panthers will kick off conference play on Friday for their next game at Virginia Tech. Waldrum said he believes that the ACC is one of the toughest conferences in college soccer, and he knows what Pitt will have to do to survive.

“We have to win more games in the conference,” he said. “But we think we can get something out of these first four [ACC] games, though is there ever a favorable schedule in the ACC?”

ACC Network Extra will broadcast the game at 5 p.m.