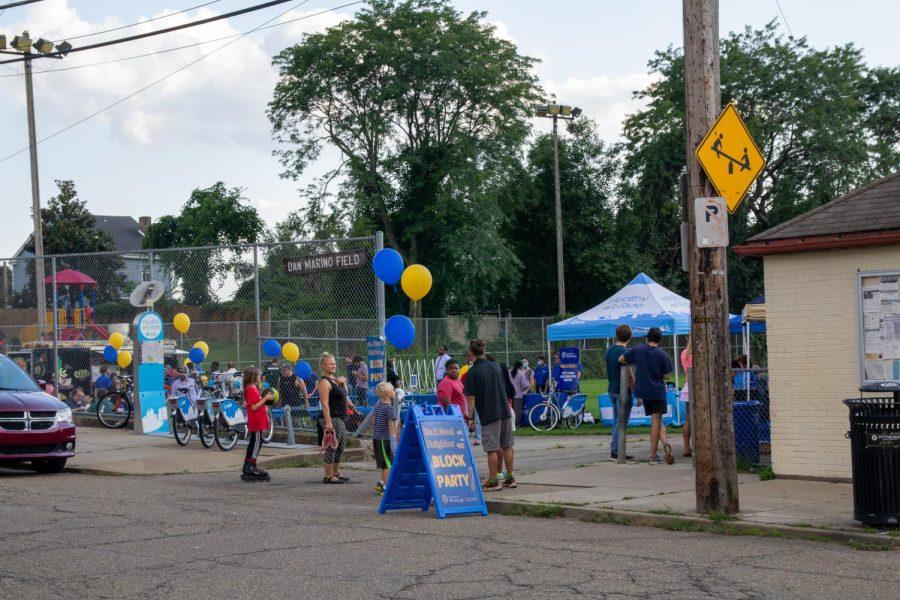 A Be A Good Neighbor Block Party in South Oakland in fall 2021.

For Maria Montoya, Pitt’s Be A Good Neighbor Block Party reaffirmed her positive views on North Oakland and its community.

“I already had a pretty positive view of the North Oakland area, especially after this block party but I think this event is also reaffirming those beliefs. I definitely feel welcomed. It’s safe,” Montoya, senior molecular biology major, said.

Pitt’s Office of Campus Engagement and Community Affairs hosted its second block party of the year on 234 N. Dithridge St. in North Oakland on Tuesday evening. This party was a part of the office’s annual September event series, “Be a Good Neighbor Block Parties,” which consists of five events hosted in different areas around Oakland.

The event series began last Tuesday in South Oakland. The next block parties will occur in Oakcliffe on Sept. 14, Oakland Square on Sept. 20 and on Sept. 27 in West Oakland.

The goal of the initiative is simple 一 to make everyone feel welcome in their community, Justin Dandoy, director of Community Affairs, said.

“We want to make sure students and residents feel that we’re all part of the same community. We live here, work here, play here and have a tremendous sense of pride for Oakland,” Dandoy said.

Tuesday night’s block party consisted of an intimate setup of tables around the yard of 234 N. Dithridge St. Accompanied by live music and a variety of backyard games such as cornhole and Connect Four, the event also included complimentary food from a Venezuelan food truck, Cilantro & Ajo.

The block party featured tables from various Oakland-based vendors, including Carnegie Library, Phipps Conservatory and Botanical Gardens and Pitt’s Student Office of Sustainability. The event drew in a crowd of about 120 North Oakland residents, including children, families and elderly couples.

“I really like it,” Montoya said. “It was a very good unexpected surprise to run into after my four-hour lab.”

Dandoy said the event allows for students and residents to foster connections and spend some time with people they will share a community with while at Pitt.

“Oakland is a very diverse neighborhood, with the interaction of students from three Oakland universities and non-student long-term residents,” Dandoy said. “The goal of the block parties is to build connections between our students and year-round residents while providing students with the tools necessary to be good neighbors now and in their future communities beyond their time at Pitt.”

Montoya said with its intimate setup and opportunity for activities and conversation, the block party created a family-friendly environment where Pitt students and residents could feel at home in their new communities.

“I think it’s doing a really great job of integrating members of different age groups in the community, especially Pitt students and obviously older people, who have been part of the North Oakland community for a long time,” Montoya said.

Jamie Ducar, executive director of engaged campus, said Pitt scaled down block parties last year due to the COVID-19 pandemic. This year, with most of the COVID-19 restrictions lifted, the initiative is looking to come back in full force, with larger events, more parties and new activities.

“We’re back to doing larger scale events. After last year’s smaller events due to the COVID-19 pandemic, we’re hosting more parties, returning to full scale and will include some new activities like a DJ at some locations,” Ducar said.

The initiative for Pitt block parties began in 2013 and has grown since, Ducar said

“They’re a long-standing core community engagement program for the University. It’s part of an overarching University place-based effort to build stronger communities through long-term partnerships,” Ducar said. “We’re deeply invested in the communities we serve and committed to working to advance community agendas.”

He added that although most Pitt students are good neighbors, it’s easy for students to forget about the community living outside the University.

“The vast majority of our students are great neighbors, but we recognize that college students can sometimes lose focus on the fact that Oakland is a residential community,” Dandoy said. “We use these events to put faces and names to the residents so we can build a sense of shared community.”

Correction: This article has been updated to reflect that about 120 people attended the event, not 20. The Pitt News regrets this error.