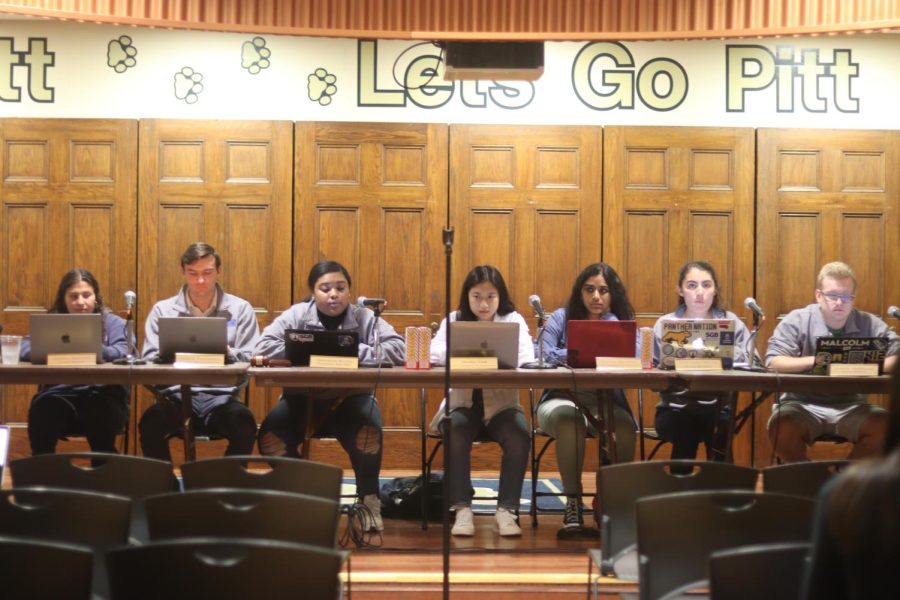 Student Government Board at its weekly meeting in Nordy’s place Tuesday evening.

Danielle Floyd, president of Student Government Board, opened Tuesday night’s meeting with an invitation for students to give feedback on the board member vacancy. Candidates for the position will be publicly interviewed on Friday from 3-4:30 p.m. in room 540 of the William Pitt Union.

“This is the student body’s opportunity to really give input as to who’s going to be the next board member to fill this vacancy,” Floyd said. “Please make sure to stop by and ask some questions and give us feedback.”

At their second meeting of the semester at Nordy’s Place, SGB discussed a “Democracy Day” initiative, switching the dining and LGBTQIA+ task forces to ad-hoc committees and upcoming events.

Justin Dandoy, the director of community affairs in Pitt’s Office of Engagement and Community Affairs, promoted the office’s off-campus block parties which help students engage with the Oakland community. Derek Dressler, a board member and vice president of governance, encouraged students to attend.

Dressler also discussed open applications for fellowships with the Civic Engagement Hub. Along with Floyd, he plans on advocating for a tuition freeze as well as grants and scholarships for low-income students.

Board member Daniel Temmallo shared details of a proposed initiative called “Democracy Day” that he is working on with board member Sophia Shapiro. The initiative includes canceled classes for students on Election Day as well as events to promote “civic participation, voter registration and community engagement.” A “test run” of the event is planned for Civic Action Week in October, according to Temmallo.

“We’re going to work on so many different events that you can all participate in and visit, and I have very high hopes for this,” Temmallo said. “I’m really hoping that this becomes a standard in the Pitt calendar going forward.”

Board member Corbin Makar shared plans to switch the LGBTQIA+ task force and dining task force to ad-hoc committees. An ad-hoc committee is “more of a support based group” than a task force, which has an “endpoint goal” and is dissolved upon completion of that goal, according to Makar.

“In theory that didn’t sound right for the dining task force or the LGBTQIA+ task force. By switching those over to ad-hoc committees, they can stay [to] support base positions,” Makar said. “[They can] continue providing support for the university as they move forward.”

The board also unanimously voted through two bills to update judicial committee bylaws.

Musical Theater Club requested $6,394.39 to cover licensing fees and supplies for their upcoming production of “The Addams Family.” The board approved the request in full.

Society of Hispanic Professional Engineers requested $3,514 to cover flights, tickets and lodging for four students to attend their national conference in Charlotte, NC. The board approved the request for $3,000 in accordance with the conference cap established by the allocations manual.

Biomedical Engineering Society requested $2,250 to cover flights and registration for three students to attend their national conference. The board approved the request for $2,214 in accordance with the group’s documented costs.

Plant2Plate, an organization meant to promote sustainability, requested $1,400 for their fall Harvest Festival. This would include live music, vendors and goats from Pitt’s goatscaping partner. The board approved the request in full.