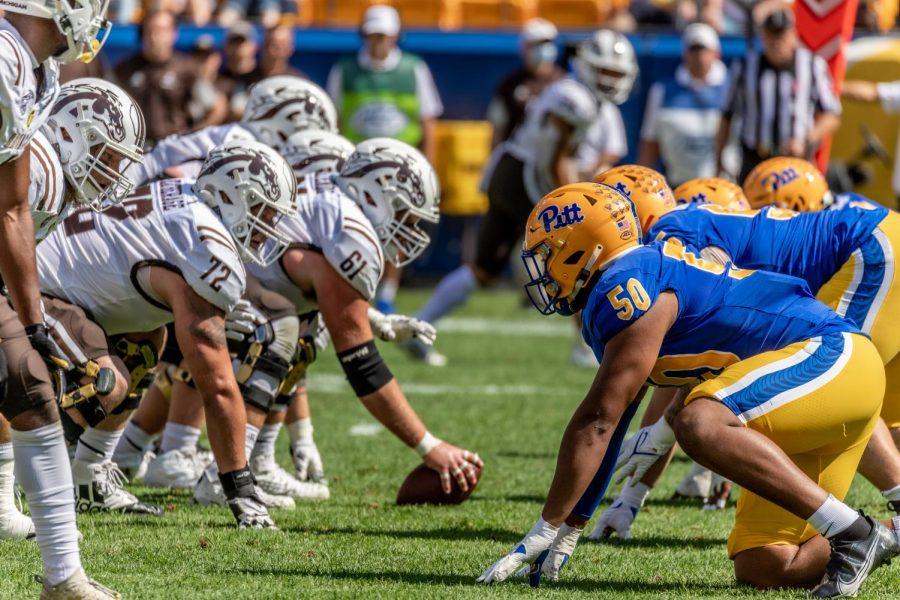 Mentioning the words “Western Michigan” is enough to make most Pitt football fans shudder. The Panthers took down some of the most notable football programs in the entire country last season en route to an 11-2 record — but they couldn’t take down the Western Michigan Broncos.

Pitt lost just two games last year, bumping itself out of contention for the College Football Playoff. Had the Panthers beaten the Broncos, they would’ve had an 11-1 record and a conference championship under their belt when the selection show rolled around. The selection committee would’ve at least put Pitt in the conversation to earn a bid to the tournament.

The Broncos shattered any hope of winning a national championship in 2021.

Well, Pitt will face its demons this weekend as the Panthers travel to Kalamazoo, Michigan, for a matchup with the Broncos. Senior defensive lineman Habakkuk Baldonado said he and the team will practice with a little more juice this week knowing the Broncos are waiting for them at the end of the week.

The Panthers are coming off of an emotional overtime loss to Tennessee in which they lost multiple offensive starters to injury. Senior center Owen Drexel left the game with an undisclosed injury, and senior quarterback Nick Patti was significantly limited due to a reported high ankle sprain. But Pitt fans are most concerned with the status of starting quarterback, senior Kedon Slovis.

Slovis was under duress the entire first half, taking hits from the Volunteer defense all game. The senior never left the locker room after halftime, leaving the game with a reported concussion.

This begs the question — who’s left to play quarterback?

If Slovis and Patti’s injuries keep them out of the game against the Broncos, head coach Pat Narduzzi will likely go with senior Derek Kyler. The senior transferred to Pitt this summer after spending the prior three years at Dartmouth. Kyler was very accurate and limited his mistakes, completing almost 70% of his passes and tossing 42 touchdowns and just six interceptions.

But this was all against primarily FCS teams. Nobody knows what’ll happen when Kyler steps under center against an FBS team — we may find out soon enough. Narduzzi said redshirt first-year Nate Yarnell could also win over the coaching staff to take the third-string quarterback job.

“Kyler’s been good, Nate Yarnell has been good,” Narduzzi said. “I would say it’s a toss-up who the third guy would be.”

Another prominent player nursing an injury on the offense is sophomore Rodney Hammond. Hammond left Pitt’s game against West Virginia with an undisclosed lower body injury and didn’t play against Tennessee either.

Hammond is just one-half of the potent Pitt running back duo. While junior Israel Abanikanda proved that he can handle the workload on his own against Tennessee, the Pitt offense is more dangerous when they have both of their workhorses at their disposal.

Narduzzi doesn’t disclose injury statuses, either — in fact, he’s notorious for swiftly dismissing injury questions from the media. So barring a complete change in character, nobody will know if those guys are good to go until Pitt takes the field on Saturday.

In regards to Western Michigan, the Broncos don’t boast the most menacing offense. Luckily for Pitt fans, the duo of receiver Skyy Moore and quarterback Kaleb Eleby are now playing in the NFL. Eleby played a near perfect game, throwing for three touchdowns and more than 300 yards to beat Pitt last year.

The Broncos are averaging 385.5 yards per game through two weeks, with running backs junior Sean Tyler and senior La’Darius Jefferson serving as the heartbeats to the balanced offense. Tyler is rushing for more than five yards per carry, with two touchdowns as well.

The offense is not nearly as threatening as it was a year ago. But if Pitt isn’t ready, the Broncos can and will make the Panthers pay. Narduzzi knows this too, and said first-year quarterback Jack Salopek is a player who can win ball games.

“Salopek is a good football player,” Narduzzi said. “He was accurate with all his short passes he did throw in the game. He moves well. He’s tough. I think he’s a tough guy. And he operates the offense. I think he’s real coachable…They’re very similar to what they were a year ago offensively. He’s done a nice job so far in two games.”

One thing Pitt does have going for it is that the Panther defense is relatively healthy. The secondary has played well, the linebackers played much better with senior Brandon George back in the rotation and the defensive line has played well enough as well.

The Broncos’ defense has surrendered more than 400 yards of offense per game after their first two weeks of play. But again, they may be catching the Panthers on an off week without one of their running backs or their top two quarterbacks. Pitt’s defense needs to hold up if it wants to win a game with a makeshift offense.

If you’re a betting man, I advise you to bet the under in this one.

To be quite blunt, nobody has any idea what to expect when the Panthers head to Kalamazoo, Michigan. But one thing Pitt fans can hang their hat on is that the defense is healthy, for the most part.

Pitt’s secondary success is a pleasant surprise this season. Seniors M.J. Devonshire and Marquis Williams have played very well to start the year on the outside, and the safety tandem of Erick Hallett and Brandon Hill has been rock solid to start the year. Expect the secondary to continue its elevated play against the Broncos.

The Panthers need a big showing out of the defense with the amount of uncertainty surrounding who’s playing quarterback. The defense will rise to the occasion and hold the Broncos’ offense to limited yards, allowing the offense to win on just a few scores.

Pitt wins this one, but it’ll be quite obvious how much they’re missing Slovis.

The Panthers will take to the road for Kalamazoo, and the game will kickoff at 7:30 p.m. on Friday. The contest will air on ESPNU.