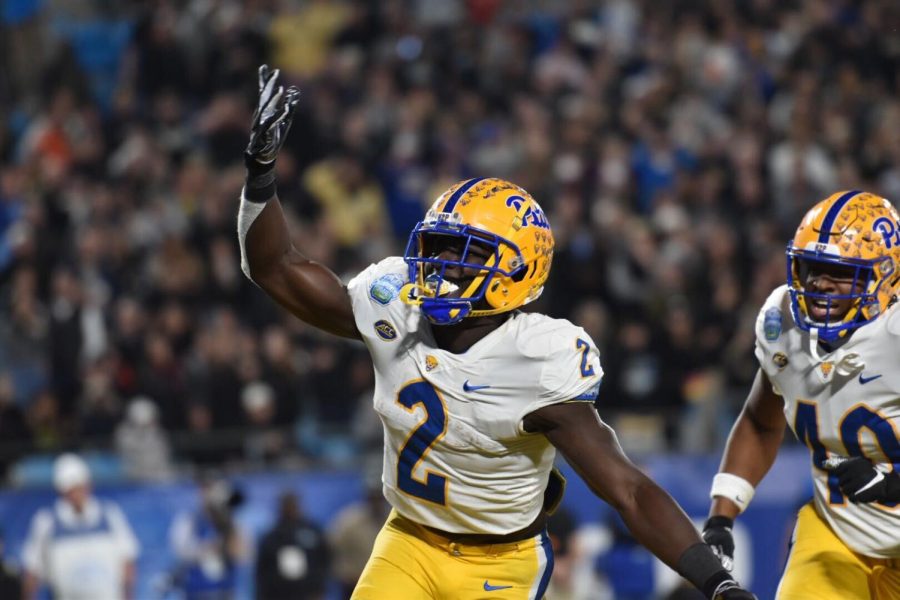 Junior running back Israel Abanikanda (2) after scoring at the ACC Championship Game in December.

While the Panthers balled until the very end of the game, Pitt football fell to the Tennessee Volunteers in overtime last week. While the Panthers’ offense may have stalled a bit after senior quarterback Kedon Slovis left with an injury, a couple of Panthers earned national and conference honors in the wake of Pitt’s first loss of the season.

Sophomore tight end Gavin Bartholomew earned national honors, winning the Mackey Award Tight End of the Week. The Mackey Award is awarded to the top performing tight end in the country. Bartholomew separated himself from the pack with a career-high 84 yards on five catches.

Bartholomew turned heads with his 57-yard touchdown last week. Bartholomew caught a pass from Slovis along the sideline and hurdled the only defender in his way, scoring a pivotal touchdown for the Panthers. This performance came a week after Bartholomew had just one catch against the West Virginia Mountaineers.

Junior running back Israel Abanikanda also had one of the best games of his career against the Volunteers, earning him ACC Running Back of the Week honors. Abanikanda ran for a career-best 154 yards. The junior averaged over six yards per carry and scored a touchdown in the loss.

Abanikanda performed without his positional partner, sophomore running back Rodney Hammond. Despite the uptick in carries, Abanikanda didn’t miss a beat against the Volunteers.

The Panthers will look to get back in the win column this week as they hit the road for a clash with Western Michigan Broncos. The game will start at 7:30 p.m. and air on ESPNU.