Yarnell takes advantage of opportunity, leads Panthers to a 34-13 win over Western Michigan 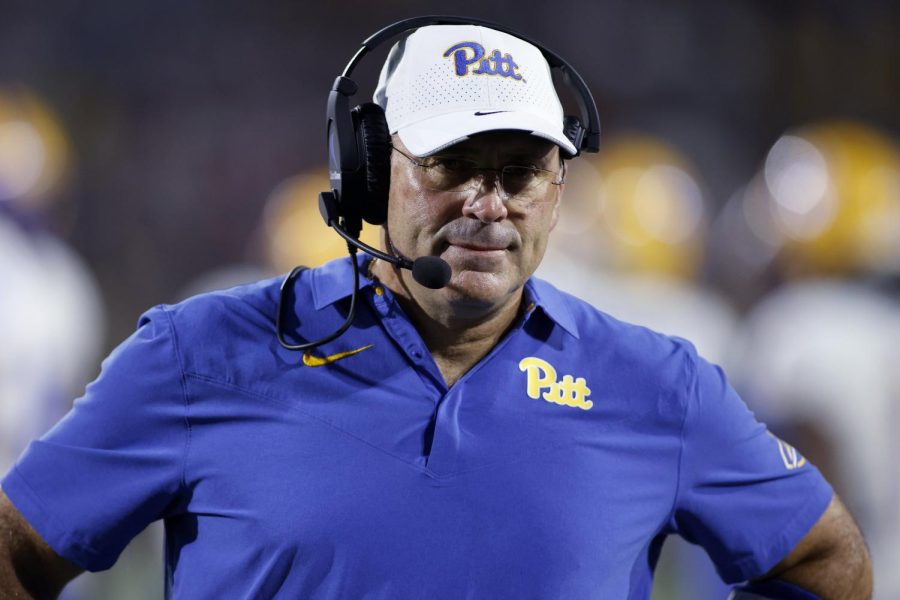 Pittsburgh coach Pat Narduzzi walks the sideline during the first half of an NCAA college football game against Western Michigan, Saturday, Sept. 17, 2022, in Kalamazoo, Mich.

1,023 days. That’s how long it’s been since redshirt first-year quarterback Nate Yarnell played in a football game. But with injuries to seniors Kedon Slovis and Nick Patti, head coach Pat Narduzzi decided to start Yarnell against the Western Michigan Broncos.

Narduzzi didn’t reveal who his starter was before the game, but when the offense marched onto the field for the first time, it was Yarnell under center. Yarnell has never played in a collegiate game, let alone start in one. But the Texan took advantage of the opportunity in front of him and led the Panthers to a 34-13 win over the Broncos.

Offensive coordinator Frank Cignetti Jr. eased Yarnell into the game, starting with nine rushes and just one pass attempt on the first drive. Despite the run-heavy attack, the Panthers got on the board first with a 48-yard field goal from Ben Sauls.

Without their starting quarterback, the Panthers needed their defense to step up and they did just that early on. After forcing a three-and-out on its first drive, the defense decided to break the ice. Senior defensive back Marquis Williams jumped a screen pass and waltzed into the endzone for an easy defensive touchdown, putting the Panthers in the driver’s seat with an early 10-0 lead.

Pitt surrendered a pair of field goals after a slew of penalties and miscues, allowing the Broncos to remain within striking distance for much of the first half.

Cignetti’s heavy rushing attack forced the Broncos to load the box in response. This is when he opened up his playbook a bit. Cignetti started calling passing plays and Pitt fans caught a glimpse of what their young quarterback is capable of. Yarnell and senior receiver Jared Wayne looked like they had played together for years, linking up for three completions and 94 yards in the first half.

But the Panthers still couldn’t punch it in on offense. Pitt was inside of the Broncos’ 10-yard line twice and only managed to score three points on those opportunities. Neither offense scored a touchdown in the first half, with Pitt taking a 13-6 lead into the break.

The defenses brought the momentum over from the first half, starting the latter portion of the game trading stops. Senior safety Erick Hallett, who the Broncos dominated last season, picked up two interceptions on back-to-back drives in the third quarter.

The offense capitalized on the second Hallett interception and finally punched in the game’s first offensive touchdown. Yarnell found sophomore Gavin Bartholomew for a long gain to set up a short rushing touchdown for junior Israel Abanikanda. Based on how the Pitt defense had played all game, it looked like Western Michigan

But the Broncos offense decided to wake up with the Panthers. In just three plays, the Broncos drove 75 yards for a touchdown. Western Michigan dug into its bag of tricks, unloading a 31-yard flea flicker to match the Pitt touchdown, cutting Pitt’s lead to 20-13.

The defenses started to slow down in the fourth quarter, both falling victim to long plays. Cignetti noticed this and took advantage. The offensive playcaller dialed up a 12 play, 74-yard scoring drive and took more than seven minutes off of the clock in the process. The sequence culminated in Yarnell finding Mumpfield for his first career collegiate passing touchdown.

Yarnell’s first touchdown halfway through the fourth quarter gave Pitt the breathing room it needed to put this one out of reach. After another defensive stop, the Panthers added another touchdown for good measure late in the fourth quarter as junior running back Daniel Carter scored from three yards out.

The Pitt defense took care of business on the ensuing drive, putting the game on ice and avenging last year’s loss to Broncos. Pitt held the Broncos to just 180 total yards in the win.

The victory came with casualties, though. Wayne, Williams and senior defensive lineman Habakkuk Baldonado left the game with injuries, adding to an already crowded injury list.

The Panthers’ next game is next Saturday against the Rhode Island Rams. The game against the Rams is Pitt’s last non-conference game before starting ACC play. The contest with the Rams will kickoff at noon and air on ACC Network.