Opinion | A monarch’s death is not something to grieve 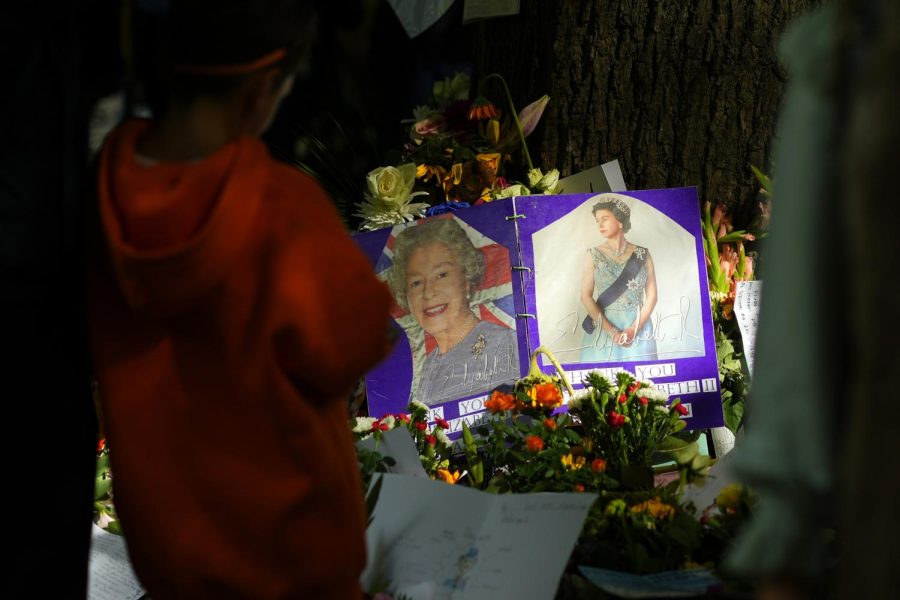 Flowers and pictures brought for the recently deceased Queen Elizabeth II of England rest near a picture of her at Green Park in London, England on Sunday.

By Sofia Uriagereka-Herburger, For The Pitt News

The death of an objectively terrible yet subjectively loved public figure is always an interesting event. Queen Elizabeth II’s death at the age of 96 yielded the usual mixed reactions — powerful, equally evil people, taking offense to legitimate criticism and some truly deranged expressions of grief from the British — all par for the course.

This mourning period has given rise to a knee-jerk response to the mirror being held up to the British Empire — the well-worn “Yeah, but, that’s not the Queen’s fault, is it?” Carnegie Mellon University professor Uju Anya said it best when she described the paradoxical celebration and defense of Elizabeth II as a “cult of white womanhood.” The Queen is being lauded for her nonexistent achievements in a falsely described “man’s world” when in reality she was just as harmful as any male monarch has been.

The death of Queen Elizabeth is not a loss, and the idea that she should be publicly mourned at the expense of taxpayers is a thoroughly ridiculous premise that will have a profound negative impact, both on the historical consciousness of a nation and on the quality of life of millions.

Royalists have waffled between separating the Queen from the atrocities committed by the British army during her reign and celebrating her for the peace she supposedly achieved. This predicament makes it obvious that the monarchy will find no real redemption in the public eye. The people defending the royal family can’t seem to make up their minds about whether they’re innocent figureheads who are there to serve as the poised, inbred mascots of empires desperately trying to reform their image, or if they’re commanding, soothing presences in times of trouble.

Here’s a hint — they’re neither. The Queen’s position as head of state entitled her to powers that she took mostly as symbolic — and yes, of course the British parliament should not be let off the hook for any of the crimes against humanity during the last near-century, but it is crucial to remember that only the public interpreted the royal powers as symbolic. The royal family had, and has, real, dangerous power. Their manipulation of the law did not end with the beginning of tabloid news, it just got slightly more careful.

The Queen stripped Prince Andrew, who best known for his connections to convicted sex traffickers Jeffrey Epstein and Ghislaine Maxwell, of his titles after he settled a lawsuit with a woman he allegedly sexually assaulted. Yet Elizabeth did allow him to keep his title of Vice Admiral, and reportedly paid a part of the $21 million settlement.

All this is to say, the “symbolic” nature of the queen’s power did always tend to become more tangible when it served her family’s best interests. The idea that she was just as unable to prevent atrocities committed by the British state as any other citizen is a blatant falsehood.

If she had the ability to protect her son and continue to cement him as a public figure, what excuse is there for her unwillingness to do so much as express distaste or disapproval for the torture and murder of about 90,000 Kenyans, the secret funding of a war in Yemen that killed 200,000 people, the military occupation of Ireland that led to the torture, illegal detainment and murder of thousands, or the anticommunist propaganda campaign launched in Indonesia to prop up a regime that was responsible for one of the worst massacres in human history?

We’ll probably never know the full extent of the blood on England’s hands — many witnesses are either dead or dismissed as terrorists. This remains true today, even if information has never been easier to access. “Operation Legacy,” employed from the 1950s to the 1970s, was a mass destruction of military records that “might embarrass Her Majesty’s government.”

Additionally, the royal family cost British taxpayers 102.4 million pounds last year. The funeral of the queen, the following coronation, the cost of changing all the currency to bear Charles III’s face — who, by the way, has not been required to pay the standard 40% inheritance tax — the cost of changing the royal seal and countless other entirely pointless acts of obligatory, performative mourning, are predicted to cost the British people 6 billion pounds at least.

But what about the 22% of British citizens living in poverty? That’s 14.5 million people living below the poverty line in a country with an unelected head of state that owns one-sixth of the world’s property. Could funds from the exorbitantly-priced funeral not have gone to help those in need?

To add insult to a legacy of injury, hospital appointments have been canceled during a time when waiting lists for hospitals have never been higher in England. Many food banks have also decided to close for the funeral, in accordance with its new designation as a bank holiday.

The queen’s death is not a tragedy — it is a more peaceful end than anyone in her position, with her level of complicity, could have hoped for. We should not make allowances for the beautification and warping of her legacy, but rather take this time to examine how history actually unfolded for those forced to live under the British monarchy.

Sofia Uriagereka writes about politics and international and domestic social movements. Write to her at [email protected]