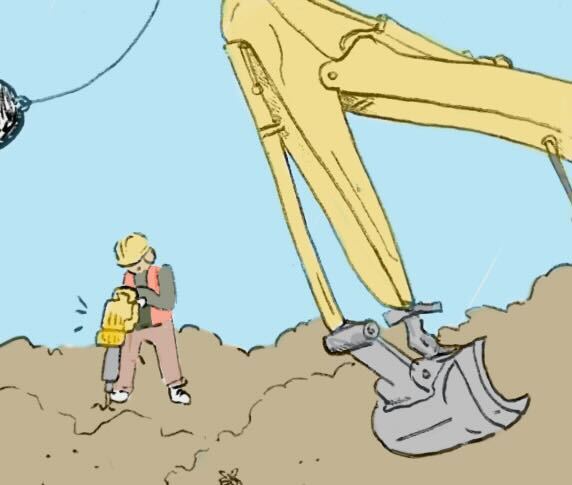 By Thomas Riley , For The Pitt News

In preparation for upcoming construction plans on upper campus, Pitt released word last week of new walkway closures. When asked if this will affect students’ commutes to their classes on lower campus, Pitt responded, “I mean, who really cares about those guys, right?”

Unfortunately for students living in upper campus residence halls, reports find this new construction will impose a small detour on their typical walk down to lower campus. Despite the controversy surrounding the indefinite blockage of high-traffic streets, upper campus students claim they don’t mind the inconvenience.

“My walk to lower campus used to be around eight minutes,” reported a sophomore resident of Irvis Hall. “Then, when they began construction on the Petersen lawn, it was more like 12 to 15 minutes. So, at that point, what’s another half hour added to my walk with the new construction?”

While some people may assume students would expect compensation or demand a change in housing, the residents of upper campus claim they still would not want to live anywhere else. Each student interviewed, tethered to their residence halls by $4,000 deposits, placed extra emphasis on the fact that they do not regret their housing decision.

“Would I have chosen a different residence hall had I known I would be traversing miles of twisting urban streets every morning before class? Sure,” said Kim, a sophomore resident of Panther Hall, “But look, the exercise is nice. If I want to see my friends, or go to class, or enjoy my college experience, I get a full hour leg workout. It’s great — really, I feel blessed.”

The students all seem to use different routes to reach lower campus, but no matter which way they go, all of them agree that walking in the opposite direction of their destination for 15 minutes before making any real progress is perfectly fine. They believe the monotony of Pittsburgh’s gray, dilapidated streets really adds some much-needed deindustrialized scenery to their walk to class.

In an effort to reduce the arduous journey, some students on upper campus have formed a society dedicated to identifying the most efficient walk from the residence halls down to the Cathedral of Learning. After countless trips, hundreds of working hours and a few casualties, the infamous “Cathfinders” believe they have found a previously unknown walking path from upper campus to the Cathedral.

“It’s beautiful,” claims Jeremy, head minister of the Cathfinders. Practically foaming at the mouth, he rejoices that it’s “only a 35-minute walk from Irvis Hall to Cathy. Do you understand how revolutionary this is for the martyred residents of upper campus?”

The Cathfinders believe this new route will replace Cardiac Hill. While the walk is shorter than the alternatives, the terrain is far steeper and more rugged. Some Cathfinders recommend students wear hiking boots before attempting to cross the perilous terrain of the newly coined “Multiple Organ Failure Hill.”

Others have founded organizations that accept the isolation of upper campus and seek to thrive as a small community. These grassroots movements campaign to require online options for all classes to avoid risking the journey to their academic buildings. Most of these groups insist that upper campus makes up for its great distance with the accommodations it provides to those who live there.

“Yes, the future may seem grim,” said Jordan, a first-year resident of Sutherland Hall, “but we have everything we need right here. My friends in Tower A don’t know what they’re missing. I have air conditioning, and I don’t even need to go outside to get food — The Perch is right downstairs!”

Jordan’s friends, Ashley and Kate, sheepishly admit that they pretended not to have air conditioning because they felt bad for Jordan.

“Sometimes, I do wonder what’s down there,” Jordan said. “Just past the chain link fences I can see the beautiful expanses of lower campus. I like to watch the bustling nightlife and listen to the inebriated shouts of affection and jubilation. Sure, I could walk down and join in the chorus of carefree young adults, but soon my path to such wonder will be bulldozed before my eyes. Is it not better to be satisfied with the certainties of life than to indulge in impermanent luxuries?”

As the residents healthily adjust to their new lifestyle, the upcoming construction plans on upper campus force them to ponder their choice of housing. Some cling to the trivial benefits, both real and imagined, while others stoically downplay the difficulties of traveling to and from their homes. Only one thing is universal — they will never suggest they made a mistake choosing upper campus.

Thomas Riley primarily writes social satire and stories about politics and philosophy. Write to them at [email protected]