Candidates for SGB board vacancy talk diversity, inclusion in interview 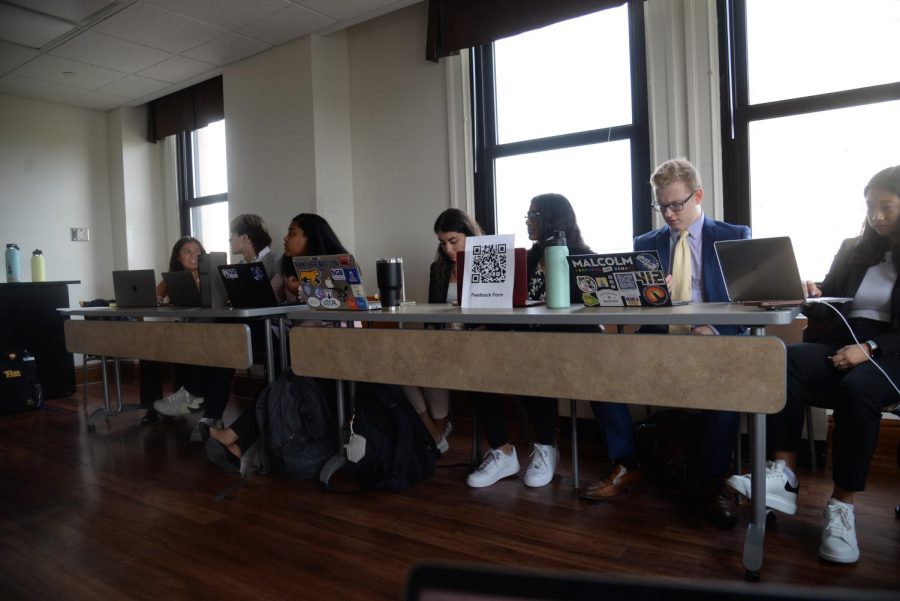 SGB members at a public interview session in the WPU on Friday evening.

All four candidates publicly interviewed for the vacant Student Government Board position made one thing clear — student voices and diversity and inclusion will be their main priorities if appointed.

SGB held public interviews Friday evening in the William Pitt Union for candidates competing to fill a vacant board member position. The Board will publicly interview the top two candidates that they choose during their weekly meeting on Tuesday at Nordy’s Place. The newly appointed candidate will serve as liaison to the Diversity and Inclusion committee.

Sarah Siddiqui, a sophomore sociology major and current chair of SGB’s wellness committee, said she decided to run for the position because she wanted to “do more about student concerns.”

“I’m looking to evolve and work on a broader range of student concerns, and I feel like I can do that as a board candidate and as a potential board member,” Siddiqui said.

Siddiqui said she believes diversity and inclusion are a “big concern” for students on campus that can be addressed through direct outreach to students and organizations. Siddiqui also said she would reinstate the Students of Color in Solidarity Task Force if chosen for this position.

“One of my big initiatives is to actually reach out to student organizations that focus on diverse communities on campus… racial, religious, ethnic, disability focused, LGBTQIA focused, gender focused…” Siddiqui said. “Until we actually know what their concerns are, there’s really nothing we can do to help them.”

Siddiqui hopes to prioritize dining issues if chosen, and said “there are a lot of [student] needs that aren’t being met.”

Madelynn Lederer, a junior political science and professional writing major, said serving on SGB would be a “great privilege.”

“One of the big responsibilities of the Student Government Board as I know is to allocate the student activities fund to all of those different organizations,” Lederer said. “Having the experiences that I have has really given me a great appreciation for the leadership that’s shown from those organizations. So to be able to have that role in helping them further their efforts would be a great privilege.”

Lederer said if chosen to be the Diversity and Inclusion liaison, she believes instead of guiding the committee, she should listen to the voices of others.

“I would rather just be the person who is there with the clear intention of whatever their priorities are, whatever they need, that then becomes my priority,” Lederer said. “If they need something from me, it’s immediately on me to get that done.”

Lederer said she would like to see the committee implement a “community of leaders” consisting of diversity, equity and inclusion chairs from student organizations to help promote the resources of the committee, as well as give them a formal path for their concerns to be heard by SGB.

Ryan Young, a junior math, physics and astronomy major and current webmaster of SGB’s website, said he decided to run for the position to apply his leadership experiences.

“The issues that I’ve seen kind of repetitively in Residence Life with first-year students, the issues I’ve seen as a student organization leader, issues I’ve seen representing Honors students, I’d really like to be able to take that experience and facilitate things with it,” Young said.

Young said his job as liaison would be to “amplify” voices of underrepresented students and the ideas of the Diversity and Inclusion committee.

Young said he would also prioritize dining issues if chosen to fill the board member vacancy.

“Just this week, I had to help one of my residents get in touch with a dietician, organize a special dietary plan — they’re not really able to eat most of the food in the dining hall — and it took genuinely three weeks to reach someone,” he said. “They could not eat for three weeks, and that’s unacceptable.”

Vidya Surti, a junior English and anthropology major, said she decided to run for the position to advocate for the needs of disabled students.

“When I came to Pitt, I had heard a lot of not-so-great, negative things about disability resources,” Surti said. “I realized there’s a lot of policy change and just, initiative change and system change that needs to happen in order for more streamlined access to accommodations for students.”

Surti also plans to focus on health initiatives if chosen for the board, such as an accessible vending machine for menstrual and reproductive health products.

“In order to reach the students, and actually help them make safe decisions and focus on their wellness and mental health, you actually [need to be] going to where the students are,” Surti said.