Opinion | As Democrats continue to fail on policy, Biden’s harsh rhetoric is necessary 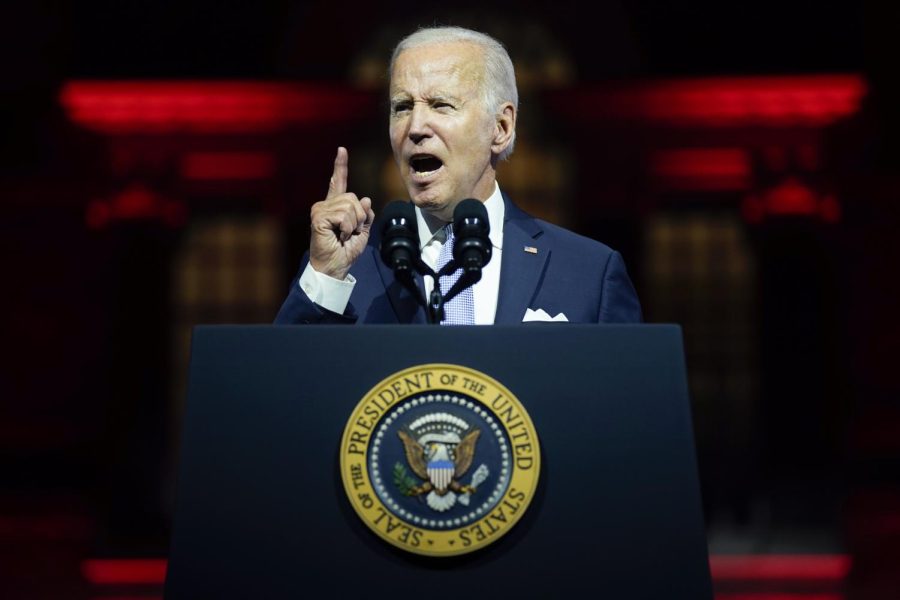 By Paul Beer, For The Pitt News

Polarization is driving America this midterm, as political ad spending is set to surpass the previous all-time record of $9 billion.

On the campaign trail, President Joe Biden has finally come out of his shell, viciously attacking his opposition, specifically “Make America Great Again” Republicans. This shift in tone represents a new strategy, built on a historical precedent, to draw voters to the Democratic Party in November’s midterm election. Biden is not in a position to argue the strength of his legislation during these first two years and, as such, needs to encourage voters to show up for him in a new way. This year, according to him, democracy itself is on the ballot.

Over the past two years of the Biden presidency, the Democrats have come under fire for every major social and economic issue faced by Americans — inflation, war in Ukraine, the Dobbs v. Jackson Women’s Health Organization ruling and more. And these pressing issues are not helping Democrats’ chances at re-securing the House and the Senate in just under three months. Biden’s approval rating currently sits at a sad 39%, with disapproval at 57%.

With two landmark pieces of legislation passing through Biden’s desk in the past month — the Inflation Reduction Act and the cancellation of student debt — why is Biden’s approval rating remaining unchanged in response? Clearly, voters are not concerned with legislative success this midterm.

Trump’s simple existence and influence on the Republican party remains the key voting issue for Democrats and independents this November.

An approval poll found that only 36% of voters approved of the Inflation Reduction Act, and more than a quarter said they had never even heard of it. As such, Biden and the Democratic Party are beginning to recognize this fact, switching their campaigning from legislative success to antagonizing the Republican Party.

During his controversial “Soul of the Nation” speech, Biden noted that “Donald Trump and MAGA Republicans represent an extremism that threatens the very foundation of our republic.” Furthermore, at a campaign event in Maryland, he stated that MAGA philosophy is akin to “semi-fascism,” a term disavowed now by Hillary Clinton, who lost to Trump in 2016.

This is an example of how Democrats must campaign to succeed this November. Independents and non-Trump supporting Republicans must recognize what is at stake when entering the voting booth. It’s true that many Americans are not noticing a tangible effect from the Inflation Reduction Act. But, considering recent attacks on human rights (such as abortion rights) and democratic institutions by the far-right, Democrats must ask this key sect of voters to put their political ideology aside to save America.

As abortion access remains one of the key voting influences this midterm, the only viable choice for undecided voters is leftward. Biden and Democrats ought to keep pushing this narrative, recognizing that the MAGA ideology is a danger to preserving Americans’ rights to abortion, marriage and equality.

Harsh rhetoric, such as the term “semi-fascism,” was seemingly out of Democrats’ wheelhouse — until now. Democrats have branded themselves as the opposition to Trump since 2016, sure, but never on a scale that implicated the very fabric of democracy in America.

This new tactic, based heavily on historical precedent, could lead to a great success for them.

Trump and other Republicans lambasted Democrats as “socialists” and “communists” from the start of their campaigns. Even Biden himself, a Democrat who was long considered a moderate, received this attack in 2020. Trump and Republicans have learned to capitalize on America’s fear of socialism. In a Gallup poll that has run from 2010 to 2021, socialism has remained securely at about a 60% negative rating.

Americans have heard the risks of electing Democrats intertwined with socialism since 1960, when Barry Goldwater, speaker at the Republican National Convention, claimed that John F. Kennedy was a “blueprint for socialism.” The RNC then employed this word each election cycle, harpooning the term “socialist” onto every single Democratic presidential nominee through the modern era. Additionally, the United States’ poor relationship with the Union of Soviet Socialist Republics at the time added to the fear surrounding the word “socialism.” This mode of rhetoric — comparing your opposition to an extreme — is not new.

Considering that 64% of Americans view American democracy as at risk of failing, Democrats must take a strategy from the Republican playbook. What Biden and the Democrats should do to cement their stake in democracy is convince their voting bloc and independents that “semi-fascism” — a new fear for Americans — has taken root inside the Republican Party. Though Biden was very clear — this criticism is limited to “MAGA Republicans” — we may see that newer, younger and less moderate Democratic politicians use this tactic against the entire Republican Party.

As political tension and division are on the rise, this type of rhetoric may spark fears of increasing that divide further. Democrats are risking alienating the Republican voting base by doing this, but the rhetoric itself is trying to avoid that. Biden has been quite careful with who he calls out, stating that he can work with Republicans, just not MAGA Republicans. At a certain point, division is healthy, and dividing pro-democracy Americans from anti-democracy Americans is valuable.

Though this division may occur, it is a necessary one to save America.

Paul Beer writes about political affairs and reads too many album reviews. Write back to him (or send music recommendations) at [email protected].