Editorial | Italy’s election could continue the dangerous trend of nationalism 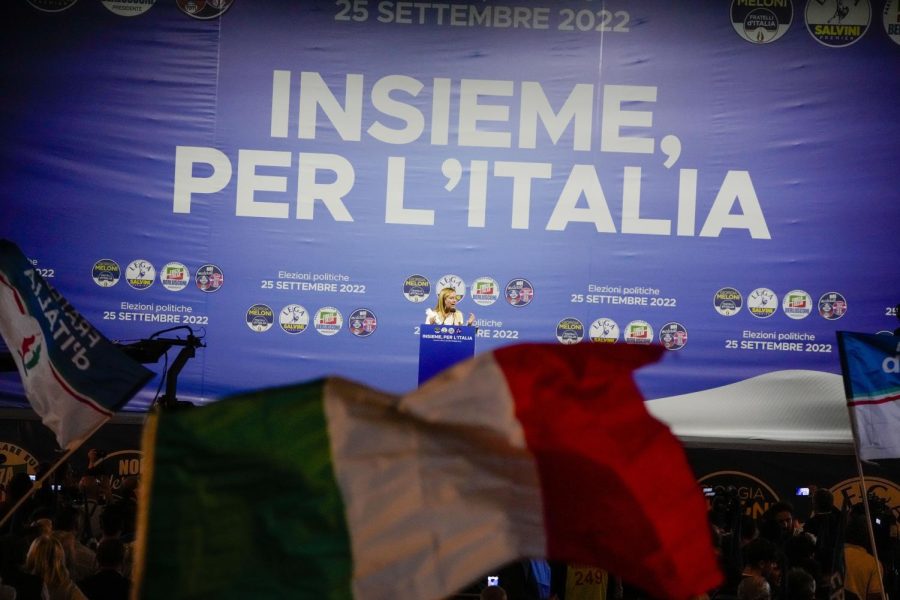 Brothers of Italy's Giorgia Meloni speaks during the center-right coalition closing rally in Rome on Thursday.

Italy is set to have its election this Sunday and the stakes couldn’t be higher as far-right leaders have gained traction, concerning many throughout the country and the world.

The Fratelli d’Italia party — or Brothers of Italy — has created a coalition with three other far-right parties and is expected to win one-fourth of the seats, while the left-wing parties are set to win barely half of that. The party’s platform includes banning immigrants from North Africa, emphasizing domestic policy over the European Union’s policies and opposing gay marriage. The party has also supported the rising dictator in Hungary, Viktor Orban. The coalition’s leader is Giorgia Meloni, and if they win, she will become the country’s first female prime minister.

Though the party denies it, the Brothers of Italy has roots in the neofascism that sprung up after World War II and Mussolini’s fall from power. This has dangerous implications for Europe as well as the world if this far-right coalition wins. Not only will Italy fall down the slippery slope of nationalism that many other countries around the world, including the United States, Brazil and, in its most extreme case, Hungary, have fallen into, but it will also signal to the world that nationalism is here to stay.

Meloni and the Brothers of Italy party seem to want to follow in the footsteps of other nationalistic countries in Europe such as Poland and Hungary. In recent years, both countries have changed the democratic norms to bolster a nationalist government — something Meloni commended, particularly in Hungary. Meloni has also looked to Trump and Putin as inspirations and has cited their rise to success as growing the network of far-right leadership.

Meloni and her party have also used fascist dog whistles, such as calling the European Union agents of “nihilistic global elites driven by international finance,” and said they were emissaries of George Soros, a common antisemitic dog whistle. Similarly to Trump, the Brothers of Italy rose to power after making highly critical statements about the immigrants, proposing a naval blockade of any ship from North Africa and Meloni stating that immigration is “an instrument in the hands of big great powers.”

This kind of talk is dangerous, but many Italians find Meloni’s views on repairing the economy appealing. Between COVID-19, money going towards helping Ukraine and the devaluation of the Euro, it makes sense why Italy would take a chance on a leader who wants to change how the system works. Meloni and the Brothers of Italy party are not how they change this, however. Italians need to understand how dangerous it is to put someone in charge who stands for the wrong things.

It’s extremely dangerous to have someone pushing this rhetoric leading Italy, or any country for that matter. It has negative implications for Europe and the world to have a leader who is pushing fascist and nationalistic ideals and who continues the trend of far-right leaders that do more harm than good. Italy has an important choice this Sunday — let’s hope they make the right decision.