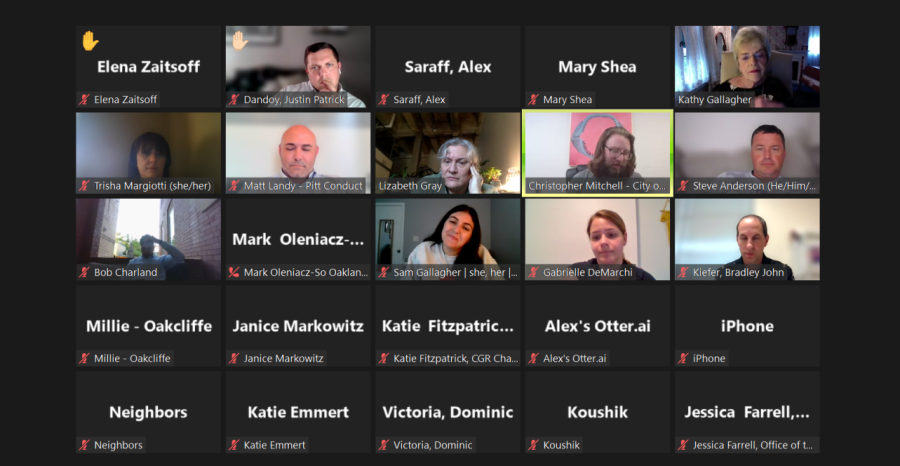 Mary Shea, an Oakland resident, said she is tired of Oakland’s trash-ridden streets preventing her from safely walking on the sidewalk.

“We went through an entire two weeks in Oakland where you could not walk on the sidewalks in between the move-ins and move-outs,” Shea said.

The Oakland Planning and Development Corp. held an Oakwatch meeting called “Let’s Talk: Trash” on Wednesday over Zoom to discuss the current trash problem residents face. These problems include high volumes of trash on the streets and inefficient trash collection.

According to Shea, the trash problem begins at the frequency of trash collection, which is once a week for normal garbage and biweekly for recycling. This means that households have to plan when they leave their trash outside so it doesn’t overflow.

“One thing that’s really falling through the cracks is recycling day, that it’s actually every other week. I mean, that’s sort of … confusing. For long-term residents, let alone students, but house after house after house has the recycling out for like an entire two weeks,” Shea said.

Coexisting in a neighborhood is a learning experience for almost all students, who haven’t had the independence or the responsibility of their own home before. According to Millie Sass, a lifelong Oakland resident, the trash issues are predominantly caused by students.

“They [students] just have no concept,” Sass said. “They haven’t been trained to live in the city, and it’s all about training.”

In the meeting, a few residents complained about the lack of accountability for people to properly take their trash out. Shea proposed a possible solution — instituting tickets for environmental violations, much like parking tickets.

“We could solve this problem — people get tickets whenever you’re blocking the sidewalk,” Shea said.

This could solve the lack of accountability problem, and might serve to discipline the households that mismanage their trash.

As far as the problem of student ignorance and its consequences, a number of plausible solutions were proposed during the meeting. Sam Gallagher, community engagement specialist for OPDC, said OPDC’s “Adopt a Block” program allows student organizations to “adopt” blocks to clean and take care of on a semi-regular basis.

“The idea is they start adopting a block, and then monthly or semi-monthly basis,” Gallagher said. “They agree to maintain that block and do trash cleanup on an ongoing basis.”

“I say it’s very highly important that you have this contract that’s in your lease to specify what time your garbage goes,” Margiotti said.

“PGH.ST,” an app that gives reminders of when trash is collected, was proposed as a solution by Pittsburgh representative Chris Mitchell.

“PGH.ST is, weirdly enough, not actually a city service. It’s somebody who saw that we were doing such a poor job out of the city that they said ‘I have to do this on my own.’ And he created it out of the goodness of his heart and we thank him for that,” Mitchell said. “We work closely with the person who created that and maintains it. And I do think that if there was more outreach with that, to get students signed up so that they knew when their recycling days and trash days were — it’s just run by a single guy as a nonprofit, he did it in his own time.”

Student affairs representative Justin Dandoy said the app was “recommended” by Pitt, but they were not able to fully implement it into the University’s structure due to business reasons. The app was created by a man who was concerned by the growing trash problem and designed the app in response.

Representatives of the City and Pitt responded to other trash-related complaints at Wednesday’s meeting. The Pitt representative for Student Affairs at the meeting announced that Pitt was going to appoint paid student leaders in Oakland neighborhoods to oversee this issue, among others.

Besides this, Mitchell also expressed a desire to make the trash collection schedule more frequent, but ultimately could not due to lack of personnel and infrastructure.

According to Sass, Pitt is responsible for the students inside the Oakland area around campus, and the University should take responsibility for student education as it pertains to trash.

“I’ve always felt that Pitt has some responsibility for their students, we like our student neighbors,” Sass said. “I know Pitt has done lots of outreach, but it’s going to take knocking and talking. It’s going to be going out on Monday night or Tuesday morning at awkward times. But I believe that Pitt owes us a private Oakland rubbish collection.”