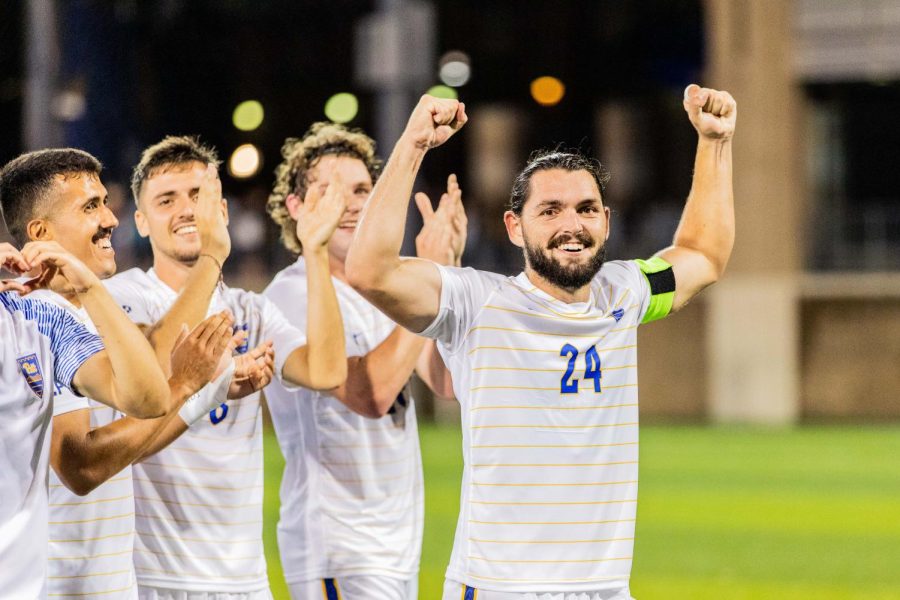 For Pitt men’s soccer, heartbreak at the brink of a national title is becoming an unfortunate trend. The team faced heartbreak in the 2020 NCAA semifinals, losing to Indiana by just one point. Then last season, Panthers fell to ACC rival Notre Dame in a fierce defensive battle during the NCAA tournament quarterfinals. Despite strong showings throughout both tournaments, the Panthers continue to come up just short of greatness.

This season, the Panthers have a prime opportunity to finally put all the pieces together and notch their first national title in program history. With an aggressive offense, strong defense and a shutout machine at goalkeeper, the Panthers have the talent to get the job done come tournament time.

The Panthers have proven themselves as title contenders throughout the early part of the season. They began their 2022 campaign with a statement win against No. 2 Georgetown. The team followed up the performance with a blowout 3-0 win against rival No. 6 West Virginia.

The team’s only defeat came at the hands of No. 11 Marshall in a highly contested match in West Virginia. Despite the loss, the Panthers still played with poise throughout the game. Pitt very nearly tied the game late, but fell just short. But even the best teams will lose a few games throughout the season. Last year’s champions, Clemson, lost five games before capturing the national title.

Following their loss to Marshall, the Panthers rebounded well, recording three straight wins and one draw. Still, the team still has a long way to go before tournament time – but it has the talent to finish strong.

Pitt can rely on its aggressive offense in tournament play. The Panthers boast one of the most explosive offensive attacks in the country, ranking top 20 nationally in both shots per game and goals per game, with 17.4 and 2.57, respectively. With their high-energy offense, look for the Panthers to dominate possession of the ball come tournament time.

The Panthers are also accustomed to battling through tough deficits and staying resilient in difficult situations. In a top 15 matchup against Akron, Pitt’s offense rallied to overcome a 2-0 deficit, forcing a draw with the Zips. The Panthers’ ability to score under pressure becomes crucial late in the season when the stakes are high.

Despite their aggressiveness, Pitt’s offense does have one flaw — efficiency. The Panthers rank outside the top 50 nationally in shot accuracy. The Panthers’ aggressive shot taking is useless if they can’t find the back of the net. The Panthers must find a way to add consistency to their attack if they want to make a late season push.

Defensively, the Panthers shine when the opposition has possession. Pitt has allowed just six total goals in seven games. The team also ranks No. 15 in the country in goal differential.

While stout, Pitt’s defense is also technically sound. The unit has only accumulated nine yellow cards this season, compared to 20 by their opponents. When the stakes get higher, teams can’t afford to accumulate red cards and suspensions, making the Panthers’ discipline a crucial element to their game.

Finally, the Panthers feature one of the country’s best goalkeepers — senior Joe van der Sar. The Dutch netminder ranks fifth in the nation in shutouts with four total. Van der Sar’s most impressive performance came against rival No. 6 West Virginia. Ignoring the pressure that comes with the Backyard Brawl, Van der Sar shined, recording five saves in a 3-0 shutout win against the Mountaineers.

Pitt will have ample opportunity to prove its talent before the postseason. Much of the Panthers’ conference schedule lies ahead, including a matchup with defending champion Clemson on Oct. 7. Pitt will also face a tough non-conference opponent in No. 10 Denver on Oct. 10.

In order to prove their strength on a national scale, the Panthers will first need to dominate the ACC. Pitt will face off against stellar competition in conference play, such as No. 1 Wake Forest and No. 3 Syracuse. Strong showings from the Panthers in ACC matchup is paramount to building their confidence down the stretch.

On paper, the Panthers are clearly an ACC and national title contender. They’ve shown strength this season, but must continue to sharpen their offensive efficiency if they want to make a tournament run. Once they do, there’s no telling how far they can go.