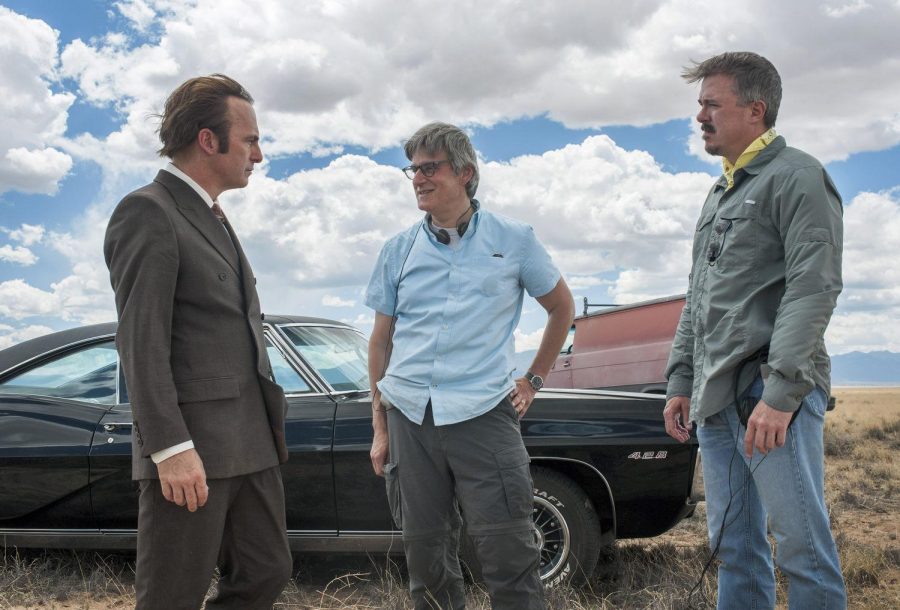 As the final season of AMC’s “Breaking Bad,” wound down in 2013,  creator Vince Gilligan announced that a spin-off would follow the beloved series, putting fears and uncertainty of a post-“Bad” world to rest — for now.

“Better Call Saul” is very aware of its massive expectations, which its predecessor inevitably — and perhaps unfairly — set into place. But Gilligan and company have managed to give “Saul” the same careful attention to detail and plot that made “Breaking Bad’s” tale of a meth-brewing chemistry teacher wildly addictive, creating an autonomous narrative within the “Breaking Bad” universe without Walter White.

The show begins post-“Bad” with a visually shaken Jimmy (or Saul?) working at a cinnamon roll shop in a mall food court before returning home to watch an old recorded commercial for Saul Goodman, a now former attorney at law.

“Saul” treats its viewers as if they’re unfamiliar with the events in “Breaking Bad” while also rewarding those who aren’t. It tells the story of small-time New Mexican public defender Jimmy McGill (Bob Odenkirk) leading up to, and after, his criminal adventures as a conman and lawyer under the guise of Saul Goodman, as he’s known in “Breaking Bad.”

Gilligan recycles many of the same iconic tricks he used in “Breaking Bad,” but he uses just the right amount before it becomes repetitive. For instance, as he masterfully teased audiences with glimpses of the future and past of Walter White in “Breaking Bad,” he offers similar insights in “Saul.” It serves as both a way to rebuild Saul Goodman, a character who previously existed mainly as comic relief, into a dynamic personality, as well as to introduce his past life as McGill — the well-intentioned but hard-on-his-luck man that leads to the crooked Goodman.

The show also jumps back in time, revealing a stint in jail before Jimmy convinces his brother, a lawyer extraordinaire, to bail him out. Afterward, Jimmy becomes a public defender. In addition to navigating courtrooms, Jimmy also has to keep his distance from clients who put him in life-threatening situations.

And of course, there are the cliffhangers. Each episode ends with Jimmy wading through a deeper and graver mess than when it began, often with much of the same frightened, what-have-I-done facial expressions that Bryan Cranston employed as Walter White early on.

Although Cranston and sidekick Aaron Paul won’t appear in the first season, other “Breaking Bad” characters already signed on to play a role in its offshoot. Mike Ehrmantraut (Jonathan Banks) pops up as a parking garage guard, along with a surprise cameo from another “Bad” alumnus in the first episode. Smartly, neither one becomes a major character right away. Instead, Odenkirk, a longtime writer for other programs like “Saturday Night Live,” “Late Night with Conan O’Brien” and “Mr. Show,” shine as the sole anchor of the show.

It’s this ability to deny an antsy audience immediate answers that makes “Saul” autonomous from “Breaking Bad” and an early success. Gilligan and his writers seamlessly weave familiar characters in and out of the story and save them for another time, rather than dropping them in simply because viewers will get a dopamine rush when they recognize them. The flow is organic, revealing pieces of the puzzle patiently and effectively. For instance, the show doesn’t reveal until the third episode that a man who shares Jimmy’s last name, and is perhaps old enough to be his father, is in fact his brother.

“Better Call Saul” is satisfying because of the way it looks and feels like “Breaking Bad,” but isn’t. Already renewed for a 13-episode second season, it is a refreshing return to Gilligan’s quirky New Mexico, which fans of “Breaking Bad” will gladly find hasn’t gone stale, despite its hiatus.