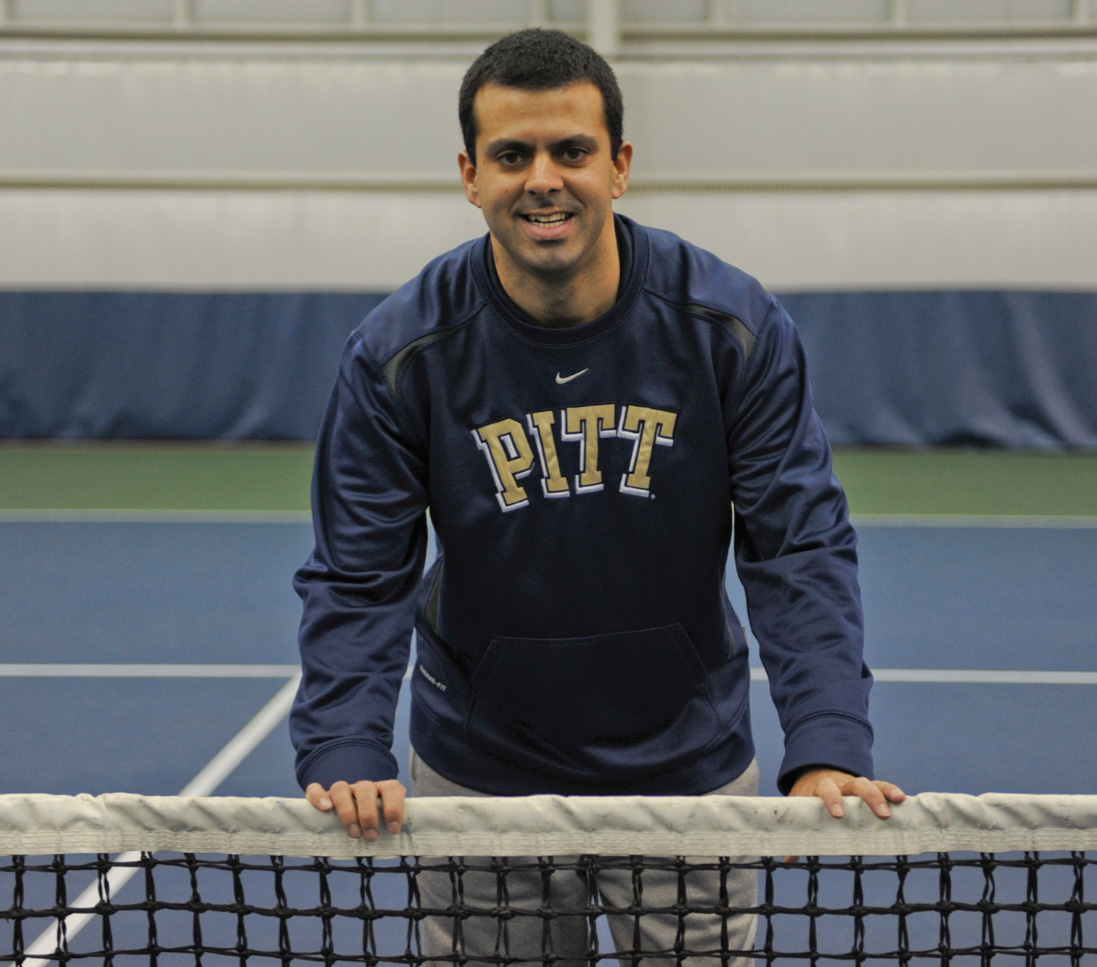 Alex Santos had made up his mind. He was going to quit tennis.

Raised in Portugal and 13 years old, the future Pitt women’s tennis coach was frustrated. His then-coach, who was also in charge of other, rival, players, treated Santos poorly and failed to develop Santos’ skill.

All the joy Santos usually derived from the sport had disappeared.

His older brother by five years, Pedro, knew something was awry when he went to one of Santos’ matches and saw him playing horribly and not having fun. When Pedro asked what was wrong, his younger brother began to cry.

Concerned about his sibling, Pedro began looking into the coach’s methods to locate the issue. He saw what Santos already knew. Convinced something needed to change, Pedro volunteered to coach his younger sibling, despite never having coached before.

Santos, who also played some soccer, decided not to leave the activity he had come to love since his introduction to it at age eight.

In three months’ time, Santos regained his form and his positive relationship with the game, beating the same players he had previously struggled against, despite possessing greater skill than them.

All three Santos children — they have a sister between them in age — started playing tennis when their father, a volleyball coach, began running a tennis club. Santos was playing competitively within a year.

On a day in late February, from the second floor office he occupies in the Fitzgerald Field House, Santos, now 32, recounts the events that recasted his athletic pursuits and brought him to Pittsburgh.

“Thanks to my brother and all his effort, I’m here today,” Santos said. “He was that one that reignited that passion for the sport.”

“He’s basically the reason why I play tennis,” he said.

Pedro’s coaching style was democratic in nature, involving a lot of discussion with Santos about what worked and what didn’t, both in training and in matches, unlike the tyrannical previous coach. Yet, early on, their arrangement retained an older-younger brother dynamic rather than a coach-player relationship.

“I definitely was not mature enough to understand what he was doing for me and how appreciative I should have been,” Santos said. “I knew deep inside that he wanted the best for me.”

The arrangement worked, as evidenced by its longevity, continuing until Santos went off to university at age 18.

During those years, they often played against each, which helped advance Santos’ development even more.

“He was older, stronger,” Santos said. “He pushed me higher and to be better.”

Although Pedro eventually stopped coaching at age 27 to become a civil engineer, his younger brother has continued with the profession since he began the summer after his freshman year of college, and he shows no signs of changing professions.

“This is something that I wanted to do throughout my entire life,” he said.

When he was 21 years old, Santos worked a summer camp at the Sanchez-Casal Tennis Academy in Barcelona, and, afterward, he was invited to stay. The following spring, he took part in an exchange program to continue his sports science coursework while coaching.

After returning to Portugal and completing his undergraduate degree, he returned to Barcelona to keep coaching while starting on his doctoral degree.

In his time at Sanchez-Casal, he coached current Pitt player Lolade Ogungbesan, a London native, among others.

Already frustrated with what he saw as inadequate resources to pursue his advanced degree in Europe, Santos missed the deadline to pay his tuition and fees for his second year, clearing the way for him to make a change.

He returned home, yet again, and began the process of looking to study in the United States. Because of some logistical issues, it took a few years to complete the continental shift, but, in 2009, Santos landed at the University of Miami, enrolling in its exercise physiology doctoral program.

Wanting to continue coaching, Santos went to the tennis team’s offices with his resumé and volunteered his services. From there, he quickly rose from an unpaid position to a salaried assistant. In the summer of 2013, he took the top position at Pitt.

“Now that I look back, and I’m able to do what I love because of [Pedro], I’m definitely appreciative and respectful,” Santos said.