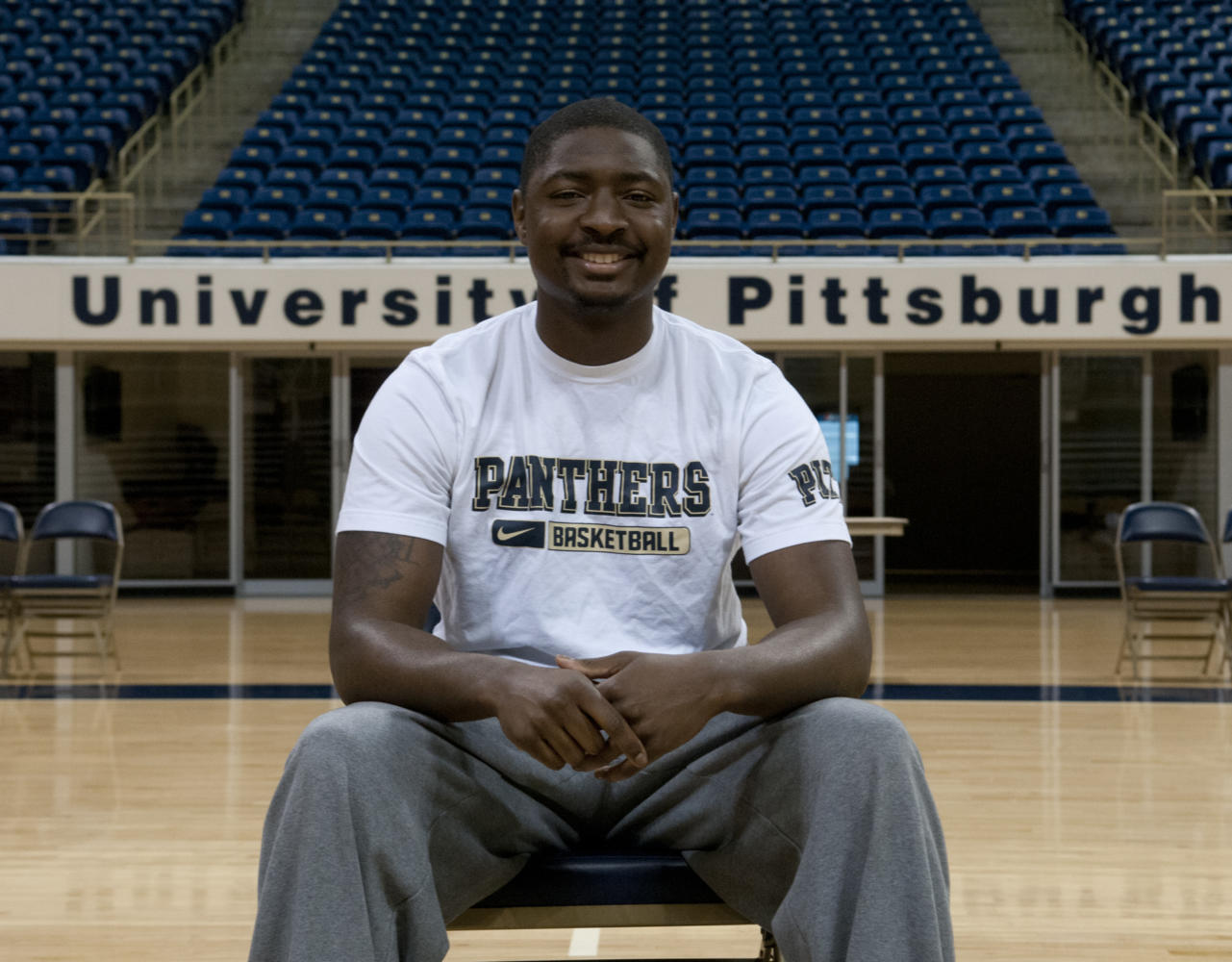 During a break at a fall workout for the Pitt women’s basketball team in the main gym of the Petersen Events Center, Ashton Gibbs grabbed a ball from the rack.

Its circumference was an inch smaller than the slightly larger men’s regulation balls Gibbs was used to, but that doesn’t matter. The ex-Panther guard finished a low crossover, breaking the ankles of an invisible defender. Then he dribbled down the right sideline, took a few steps across midcourt, pulled up and knocked down a 30-footer. He turned around and grinned at the rest of the women’s practice team — a group of volunteer players who provide extra depth during the team’s practices.

Since that memorable shot, the former Pitt guard finished his college career, traveled to Europe to keep playing and returned to Pittsburgh to open the Ashton Gibbs Basketball Academy in Shadyside.

Gibbs graduated from Pitt in 2012 as one of the most decorated Panthers in recent history. The 6-foot-2 guard was a four-year contributor and a three-year starter on a handful of solid Pitt teams. As a sophomore, he earned second team All-Big East honors and the conference’s Most Improved Player award.

Before his senior season, Gibbs was named the Big East Preseason Player of the Year and averaged almost 15 points per game en route to a College Basketball Invitational postseason tournament championship.

Since his college heyday, the former Pitt star has taken a tour of Europe, playing professionally in Greece, Spain, Romania and Lebanon, where a serious ankle injury caused him to return to Pittsburgh . The setback kept him off the court momentarily, but Gibbs has found a new outlet to remain involved in the basketball community.

“Maybe 10 of them were really serious about it,” Gibbs said, referring to players who initially enrolled when Gibbs opened his academy.

Less than a year later, the numbers have steadily grown, as he said about 25 kids are currently involved in the academy.

The Ashton Gibbs Basketball Academy has experienced so much recent success that Gibbs is considering hiring coaches to assist him, as he is currently running the academy alone. He charges between $25 and $65 per session, and local high schools and middle schools have contacted Gibbs and asked him to run a practice or a clinic. While he doesn’t yet run his own gym, he’s working on an agreement with the owners of several local gyms for regular access to facilities.

“If I had my own gym already” he said, shaking his head, “it would be crazy.”

Since Gibbs’ ankle injury brought him back home, he’s seen a lot more of his daughter, Arielle, who is now almost one year old.

“Being back in Pittsburgh, I’ve gotten to spend a lot more time with her, which I couldn’t do when I was playing,” he said.

Gibbs watches over his two younger brothers’ basketball careers: Sterling plays for Seton Hall University in New Jersey, and Temple, a junior at Seton Hall Preparatory School in New Jersey, is collecting a series of Division I offers.

Between training and spending time with his family, Gibbs has been busy. He still makes time for Pitt basketball and attends games whenever he can. Oakland Zoo members recognize him and know where he sits, which leads to introductions, handshakes and informal smartphone photoshoots.

It’s hard for a recognizable character within the Pitt basketball community to keep a low profile at the Pete, especially when sitting just feet from Carl Krauser, another former Pitt point guard and arguably the loudest voice in the building at men’s basketball games. But Gibbs welcomes fans appreciatively, posing for pictures and thanking them for their support.

Now that he has gotten his basketball academy off the ground, Gibbs can weigh a number of options. He could make the transition to coaching, but he’s not entirely sure at which level he would coach or that he’s even ready to give up on his playing career.

“It’d be tough to just hang it up right now,” Gibbs said.