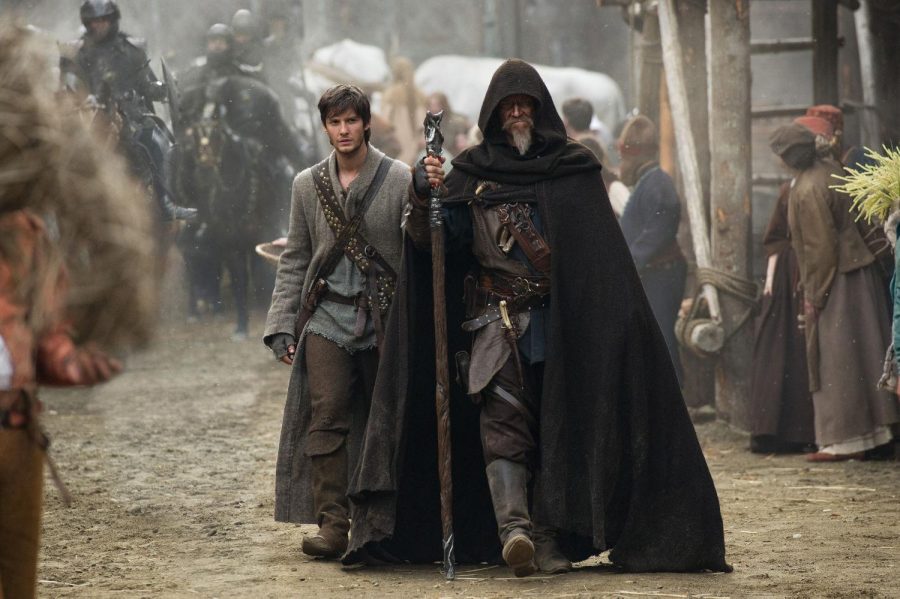 By Matt Maielli / For The Pitt News

Tom Ward (Ben Barnes) is the seventh son of a seventh son. It’s supposed to be what makes him special.

This fact leads the last legendary Spook (a skilled fighter of supernatural evil), Master Gregory (Jeff Bridges), to find Tom, train him and aid him in his destiny of stopping the evil witch queen, Mother Malkin (Julianne Moore). They plan to foil her vague diabolical plan after a Blood Moon increases her power — at least that’s what the trailers would have you believe.

“Seventh Son” is based on the medieval fantasy novel “The Last Apprentice: Revenge of the Witch,” the first in a series by Joseph Delaney. The film seemed to hold hope that “Seventh Son” would spawn an adapted series, similar in style to “The Lord of the Rings,” but director Sergei Bodrov falls far short of that epic franchise.

“Seventh Son” is more in line with fantasy B-movies, such as “The Sorcerer’s Apprentice,” “Snow White and the Huntsman” and “Eragon,” which is also adapted from a book series that hoped to hit it big on the silver screen.  The filmmakers were probably counting on a “Game of Thrones” connection, too — which is strange, since Kit Harington’s (Jon Snow of “Thrones”) character is killed off within the first five minutes, along with any hopes that the film would be anywhere near the same caliber.

The film itself shows no clear evidence that Tom is greater than any other medieval man. He is subject to visions — specifically of Gregory and Malkin — but these are later explained by the fact that his mother is a witch, not that he’s a seventh son. There’s simply nothing special about the seventh son, and the same can be said for his movie.

The cast itself has been described as a humble reunion of “The Big Lebowski,” this film being the first time that Moore and Bridges have shared the screen since “Lebowski” debuted in 1998. It’s just a shame that their reunion had to be wasted in this mess. Moore delivers a trite and boring witch performance. She was more terrifying when she misidentified her daughter as a witch in the 2013 “Carrie” remake than when she assumes the role herself.

Bridges seems to be aiming for a tired, wizened master but instead comes off as a goofy, alcoholic sorcerer. Each of his lines sounds like they are spoken through a mouthful of stew.

Barnes and Swedish actress Alicia Vikander bring a certain playfulness to the film’s main love story between Tom and the convenient double agent-witch Alice, but sadly it doesn’t keep it from being any less overdone.

The movie’s entire mythos is lazy and messy. The servant Tusk is an inhuman goblin-troll creature that serves Gregory for no discernable reason. The witches’ powers are unspecified and convenient. One witch is a wild-eyed blue man with six arms, an obvious appropriation of Vishnu. Another witch, a part seemingly written for Djimon Hounsou, can transform into a giant lizard creature and also conjure axe-chains from thin air — which is a hard sentence to type, let alone process onscreen.

“Seventh Son” also specializes in ridiculous fight scenes. One scene involves a werebear, similar to a werewolf, that is only reduced to his human form (for an unclear amount of time) after Gregory throws CGI glitter (aka “silverbane”) on him. This spontaneous Kesha concert of an action sequence is only made up for by the fact that this movie has the greatest wizard’s staff on film since “The Lord of the Rings.” The legendary Spook’s staff is used primarily for walking, but also doubles as a flamethrower and, occasionally, a witch-disintegrator, adding another level of odd to the action.

But in the end, it’s another case of screenwriters relying heavily on the source material’s goodwill. That is peculiar, in this case, considering that they also deviate from it (most likely for budget-related reasons) in a way that would assuredly anger fans of the novels. Romantic storylines are plucked out of nowhere, and some characters even switch sides in the fight against evil. Heavy CGI use muddled the film’s post-production, delaying its original debut date in February 2013.

But no amount of CGI — quality aside — could have salvaged the poor script and performances.