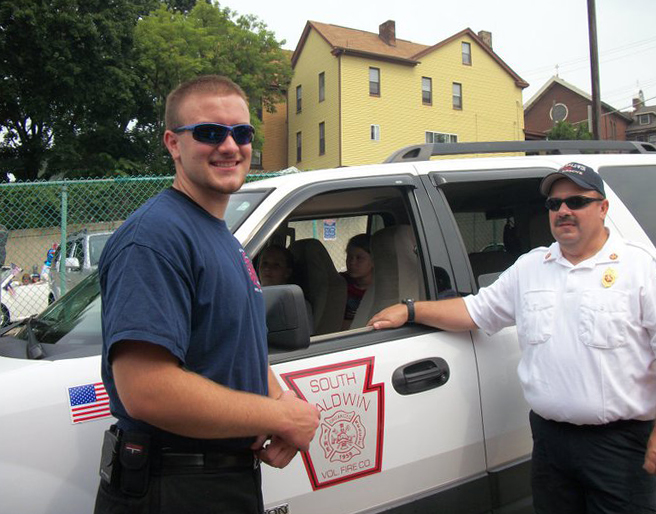 The first time Alex Pantages saw a house fire at age 15, he knew he would never forget it. Pantages arrived at the scene on a fire truck as a woman stood in her neighbor’s yard, crying and panicking. She watched flames consume her home, as thick smoke emerged from the roof.

“That’s kind of when it really clicked into place what that job meant,” Pantages, a volunteer firefighter, said.

Pantages watched in shock for a moment, then rushed to get equipment for his fellow firefighters and exchange oxygen tanks for the others who had gone in — he couldn’t go in at the time, as minors aren’t permitted to participate in interior firefighting operations.

That night, the South Baldwin Volunteer Fire Company saved the majority of the house.

Pantages was just a junior firefighter then, but what began as an opportunity to spend time with his father and brother, both seasoned firefighters, turned into much more.

“Originally, [firefighting] was meant to be a family thing,” Pantages said. “I just really wanted to look after my dad and my brother.”

Seven years later, Pantages, a senior nursing student at Pitt, knows that the South Baldwin volunteer firefighters “don’t leave a man behind.” But there’s always fear, he said. “And anybody who tells you they’re not scared is a f*cking liar.”

For Pantages, that fear helps him survive.

“You have to keep the fear in the back of your mind,” he said. “Because that’s also what’s keeping you alive.”

Pantages inherited his parents’ cool heads in high-pressure situations. The Pantages clan, he said, is good to have around in case of an emergency.

At age seven, Pantages found himself vomiting blood after his stitches from a recent tonsil removal had ripped. He expected his mother, a nurse, to faint when she walked in the bathroom. Instead, she sprang into action and put gauze down his throat to stop the bleeding until the paramedics arrived.

His father Paul, a former paramedic, always carried a medical bag during Pantages’ and his siblings’ sports games. During Pantages’ sister’s soccer game, Paul quickly stabilized a player’s ankle that had turned 180 degrees.

Pantages’ parents inspired him to pursue a nursing degree, but his professional drive has a more holistic origin.

“I always wanted to do something that I feel like I could have a positive effect on people’s lives,” he said.

Aside from his time fighting flames during his time as a nursing student at Pitt, Pantages learned he needed to stop sweating the small things.

“Something that I see is that people worry too much about the little things in life that stress them out when there are so many other things that can really take you down,” Pantages said. “Things like sweating one bad test grade or not being able to go out when you want to.”

Pantages isn’t a guy who will unwind with friends in front of the TV. He prefers the outdoors.

Pantages participated in a grueling Tough Mudder obstacle course in 2013, which involved scaling walls and plunging into icy water. In December, he learned glassblowing at the Pittsburgh Glass Center.

“I want to go out and experience things,” Pantages said. “I never want to pass up the opportunity to do something new or learn something new.”

Meanwhile, he maintains his firefighting training. He has taken engine company operations, structural burn classes and recently learned how to parallel park a 34-foot-long fire truck.

He spends most of his day, which typically starts around 5 a.m., working his required clinical hours at St. Clair Hospital. Having death and illness surrounding you would weigh heavy on anybody, Pantages said. Sometimes, he added, it can be a heavy load.

“But you have to separate yourself from it, otherwise it will eat you alive,” Pantages said.

To deal with pressure from nursing, Pantages has a ritual while walking toward the front door of the hospital to leave for the day.

“I just take a very deep breath of air and remember that now I am no longer a nurse in the hospital,” he said, “until the next time I come back.”

He does not have this luxury with firefighting. On call 24/7, Pantages admits that he often has to sacrifice schoolwork and his social life.

His friends have to accept it, though, when his pager beeps and he inevitably ditches them to go help put down a fire.

“I don’t see it as being a hero. I view it as doing what any other person should be willing to do for their neighbor,” Pantages said.