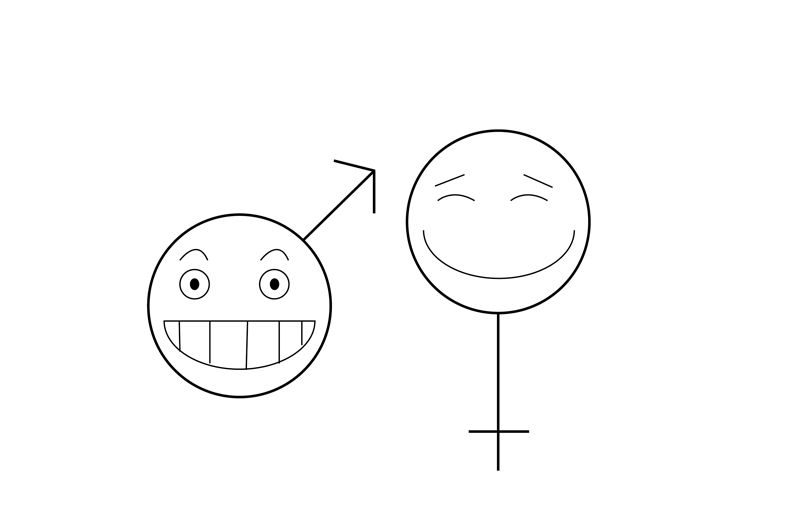 When it comes to emotions, smiley faces are the great gender equalizer between men and women.

In a 2000 study, Alecia Wolf, an assistant dean at the University of Texas at Tyler, looked at how people express themselves online through emoticons, keyboard characters used to represent faces. Wolf found that the age-old stereotypes of the emotional woman and inexpressive man may not apply to electronic communications. Through her study, Wolf concluded that, when men and women message as part of a mixed-gender group, gender has little effect on the frequency of emoticon usage.

“It’s so hard to convey non-verbal cues, like tone of voice and facial expression, in text-based communication, and I think emoticons do a great job of conveying this information for us,” said Meredith Guthrie, a lecturer in media communication at Pitt. “You can let the other people in your discussion know that you’re kidding, or that you’re angry, with just a few simple keystrokes.”

When Wolf began her research, she said there were two prevalent, yet conflicting, beliefs about the Internet.

One belief claimed that, since the Internet was male-dominated, it replicated the offline environment where the gender bias favored males in the working world.

“The Internet was viewed by some as inherently masculine and unfriendly at best —­ hostile at worst ­— to women,” Wolf said.

The second dominant belief was that the Internet was “the great equalizer,” Wolf said, because “on the Internet, nobody knows you’re a dog,” like the old adage states. This means that because men and women can remain anonymous and hide whether or not they are male or female online, it’s much more difficult for readers to uphold gender biases in the Internet world.

With this in mind, Wolf wanted to explore if race, sex, class, age, etc., disappeared online, would the internet possibly be a hostile environment for women.

“Since stereotypes already existed regarding gendered emotional expression, and the widespread use of emoticons was also a relatively new phenomenon, it seemed like an interesting place to start,” Wolf said.

Wolf’s research revealed that there is a distinct change in the kinds of emoticons used when men and women converse in a same-gender group, rather than in a mixed-gender group. Wolf said in her study that “the majority of emoticon use by females lies in the meaning category of humor; the bulk of male emoticon use expresses teasing/sarcasm.”

Additionally, when moving from same-gender to mixed-gender groups, male frequency of emoticon use increases greatly and use of teasing, sarcasm and humor decreases. Meanwhile, women use more emoticons to express teasing, sarcasm and humor in mixed-gender groups. The study showed that the basic smiley :), the basic frowny :(, and the basic winky faces 😉 are the most commonly used emoticons for both men and women.

“I think that men use more emoticons and express less teasing and sarcasm in mixed-gender groups because they want to be understood by women,” Guthrie said. “They don’t want to hurt women’s feelings and so they default to a clearer type of communication that is hopefully better understood.”

Pitt’s Slutciety publication adviser Aubrey Hirsch said this behavior may say something significant about how men and women are socialized differently when it comes to self-expression.

“Men may feel less comfortable showing real emotion in front of other men because they worry about performing their gender roles incorrectly,” said Hirsch, who is also a visiting lecturer at Pitt. Slutciety is Pitt’s intersectional feminist publication.

According to Wolf’s study, research shows that men are perceived as more technologically inclined and make the rules for online interaction.

“It seems men create the terminology and rules for cyberspace, but we must question whether their rules appropriately suit women,” she wrote in her study.

Wolf’s study found that male encoding of emoticons did not silence women in cyberspace but, instead, encouraged them   to assert positive feelings in conversation.

“Emoticons are just a new tool for self-expression, and I think it’s great that so many women are reading and writing meaning into them and using them to help themselves feel understood,” Hirsch said.

In the mixed-gender groups, Wolf found that both men and women increase their emoticon use and were able to express themselves in nontraditional ways.

“I’m particularly impressed by the way men and women move toward one another, almost mimicking each others’ communication styles in the mixed-gender environment,” Hirsch said. “There’s something really encouraging about that, I think.”

Wolf said her research could have a role to play in shaping the Internet for the better. Her study showed that women, as internal agents of change, were able to affect and shape online language use by actively participating in online communities.

“The importance of this effort is that as the voices of these groups are heard online, they take an active role in helping to recreate the Internet so that it remains a useful tool for society at large,” Wolf said.

For Sarah Offley, a freshman molecular biology major, emoticons are both useful and excessive at times.

“In some cases, emojis definitely help me figure out the other person’s tone and whether they are joking or not,” Offley said. “If I am texting someone new, emoticons help with the conversation and make sure we are on the same level.”

Offley said she uses more emoticons when she texts her female friends.

“With girls, a lot of the time it just becomes an excess of emoticons. I tend to use more emojis when I’m talking to my [female] friends, and, if I took them away, there wouldn’t be much of change in the conversation, there just wouldn’t be an excess of smiley faces,” she said.