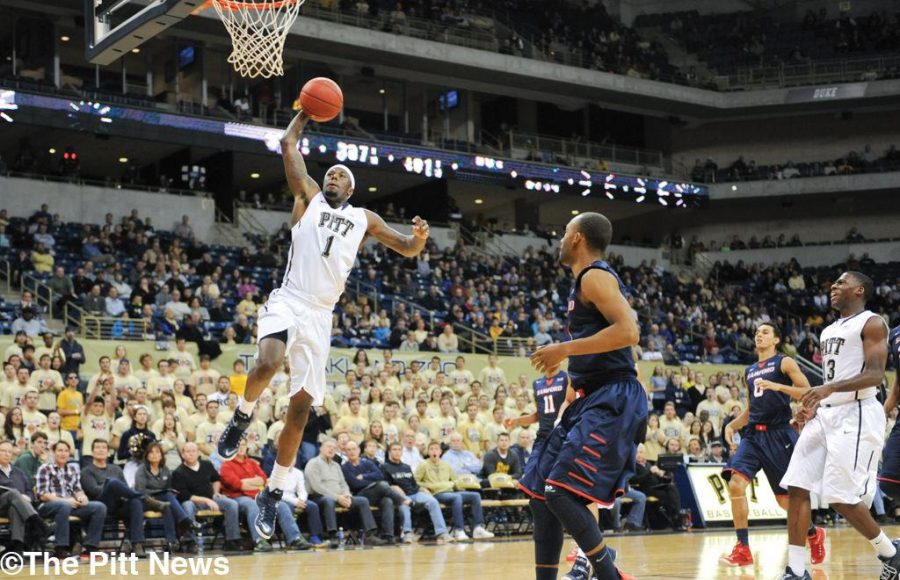 All season, the rotation for the Pitt men’s basketball team has featured fewer contributions than expected.

Multiple factors contributed to the line-up shrinkage. First came Cameron Wright’s broken foot in September on the eve of the start of practice, which sidelined him until December. Durand Johnson’s season-long suspension, announced right before the season opener vs. Niagara in November, followed.

Since then, various other ailments have kept the team from having all 13 scholarship players available at once. The most recent casualty is freshman Cameron Johnson, who is dealing with a shoulder injury. He hasn’t played since Dec. 5, missing six games.

Subtract junior transfer Tyrone Haughton, who hasn’t played a minute this season, as he is still mastering head coach Jamie Dixon’s schemes, as well, and what’s left at present is 10 capable components.

Against the NC State Wolfpack, the list became nine with big man Joseph Uchebo not seeing the floor.

All of which is to say that the need has increased for those few reserve players who can actually get court time to bolster the team’s performance as substitutes.

But, on Saturday, they offered little support when much was needed, as Pitt suffered a drubbing from NC State, losing 68-50 to begin conference play.

“This is one of those games where we didn’t play to our capabilities and we’re extremely disappointed in that,” Dixon said.

While the entire offense struggled in the game, the bench’s inability to do something positive meant there was no infusion of energy with which to build toward a comeback.

The performance gap between the two teams’ backups was evident early and often, perhaps best summed up in a sequence from the first half. On his first play of the game after checking in, Lennard Freeman, one of the Wolfpack’s first two substitutions, lost Pitt defender Ryan Luther, also playing his first minutes of the game, for a layup.

Right afterward, Josh Newkirk dribbled the ball off the foot of teammate Chris Jones, resulting in a turnover that NC State turned into a converted and-one opportunity, as Newkirk reached in to commit the needless foul.

Just like that, Pitt’s only lead of the game evaporated in a span of 20 seconds due to errors by substitutes.

Playing in his hometown of Raleigh, Newkirk had one of his worst games of the season, shooting 1-7 from the field, turning the ball over a game-high three times and scoring just four points in 21 minutes of play. He averaged 7.8 points coming into the contest.

“We were up and down with our energy,” Young said. “I feel like in the first half we had great energy. We were kind of frustrated on offense, and it took away from our defense.  But I felt, like I said, in the locker room at halftime, I felt like we had good energy. We were playing upbeat and with a good tempo.”

Young said the team just had to “start making shots.”

“That would get us going,” he said. “In the second half, our offense still lagged and still wasn’t able to make shots, [and we] got more frustrated.”

“It just took off from there,” he added.

In the next two months, Pitt has 10 games against top-100 teams. If the Panthers can’t start getting meaningful contributions from players at the bottom of the depth chart, that record will only worsen.

They next play on Tuesday night at Boston College with tipoff scheduled for 9 p.m.