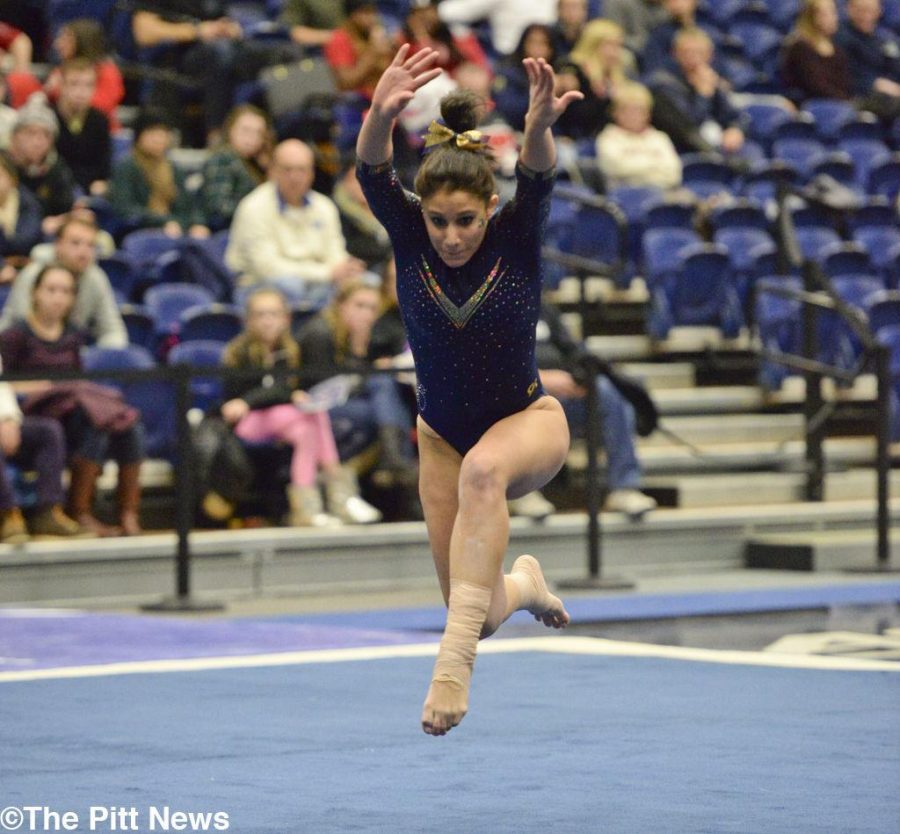 Pitt’s gymnastics team traveled to New Hampshire to compete this weekend, while the track and field team performed at the Youngstown State Invitational. Here’s how they fared.

Pitt’s gymnastics team (2-4, 0-3 EAGL) traveled to Durham, N.H., to face off against the University of New Hampshire. Pitt had a couple bright moments in junior Lindsay Offutt and freshman Taylor Laymon’s routines, but they ended up losing by a score of 195.450-192.175.

Offutt finished in a tie for first place in the floor event with a 9.800 score. Laymon also earned a share for first place, as she achieved a score of 9.825, her highest of the season on the uneven bars.

“I wanted to come out strong and keep the energy up for my team,” Laymon said. She led the way on the bars, but the team notched its lowest individual event score with just a 47.675.

Pitt then moved to vault and slightly improved upon its bars score. Tracey Pearson, who tied for second on vault and finished third in the all-around with a season high of 38.600, led the Panthers.

The sophomore said that she typically has the same mindset approaching events, but had to keep her team in mind.

“I could have improved in a couple areas, but, all around, I think my score was fair,” Pearson said.

The Panthers went on to score a 48.650 in the floor event, which turned out to be their best event of the night. Four different Panthers scored a 9.700 or better in the event and a few Pitt gymnasts finished with season-high scores.

Finally, they ended the night on the beam with a score of 48.000. Freshman Dani Hall led the way for Pitt with a personal best of 9.725, but New Hampshire’s final event scores exceeded Pitt’s total.

The gymnastics team’s next meet is against Kent State on Jan. 30.

Pitt had a great day at the Youngstown State Invitational with 10 athletes earning top finishes and Andrew Wells breaking a school record in the process.

The junior set a meet record and broke his previous personal record in the weight throw with a distance of 20.47 meters. His throw broke the previous meet record, which was set in 2013, by 1.11 meters. Wells also previously set the meet record last year at Virginia Tech with a throw of 20.20 meters.

Sophomore Brylan Slay took home first place in the men’s 400-meter dash. This was his fourth consecutive first-place finish in a meet, as he ran a personal best with a time of 48.10. Teammates Desmond Palmer and Donnell Taylor followed him in second and third, respectively.

First-place finisher Zoey Whittington paced another one-two-three finish by the Panthers in the women’s 200-meter dash. Whittington finished with a time of 25.09, Khadeja Kearney earned a second-place finish with a 25.33 and Alyssa Wise came in third at 25.34.

Pitt assistant coach Adam Bray said before the meet that success on the track wouldn’t surprise him.

“They have all been working very hard,” Bray said. “We get to see that improvement in person, and that is a fun thing to watch.”

Kearney and Ashad Johnson Conley both won the 60-meter hurdles in the women’s and men’s sides, respectively. Kearney bolted a personal-record time of 8.66, and Johnson Conley also finished with a season-best 8.14.

To close out the evening, Pitt brought home top finishers in both the men’s and women’s 4×400-meter relays. The team of Paige Lumley, Evann Thompson, Emily Schumacher and Caitlin Rolle won the women’s race in 3:58.25, while the men’s team of Avery Taylor, Palmer, Tate and Slay finished with a time of 3:15.46.

The Panthers compete next in the Penn State Invitational in University Park, which will run Jan. 30-31.