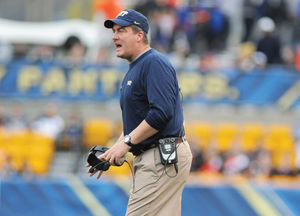 After a week of speculation, Paul Chryst has officially resigned as Pitt’s head football coach to accept the same role at his alma mater, the University of Wisconsin.

At the press conference, Chryst thanked those who gave him the chance to fulfill his new role at Wisconsin.

“This is a big moment and I couldn’t be more grateful, honored and more appreciative of such an opportunity,” he said. “[It was] a journey to get to this point.”

“It was hard because of the players at the University of Pittsburgh,” Chryst said. “That’s why we do this. They will always be special. It was pretty neat how they understood”

Despite his resignation, Chryst said his players were excited for his next move.

“One player texted me and said, ‘You always talk about opportunity, coach, and what a great opportunity. I couldn’t be happier for you coach,’” Chryst said.

Chryst spoke about what he learned from his previous job, and he said he was proud of what was done during his time at Pitt. Chryst finished with an 18-18 regular season record in three seasons at Pitt.

“We weren’t where we wanted to be by the record, but I’m absolutely proud of what those kids did,” he said. “I hope they always continue to grow and learn. And that’s the best part. We’re gonna ask our players to be the best they can be. Grow as a player, grow as a student, grow as a person.”

Chryst said he was able to inform his Pitt players of his situation early on because Alvarez had notified him at the start of the coaching search process.

“We had bowl practices, we had recruiting weekends,” Chryst said. “I was able to tell recruits what was happening. I had a chance to talk with them. They certainly knew and I did the best I could to keep them informed.”