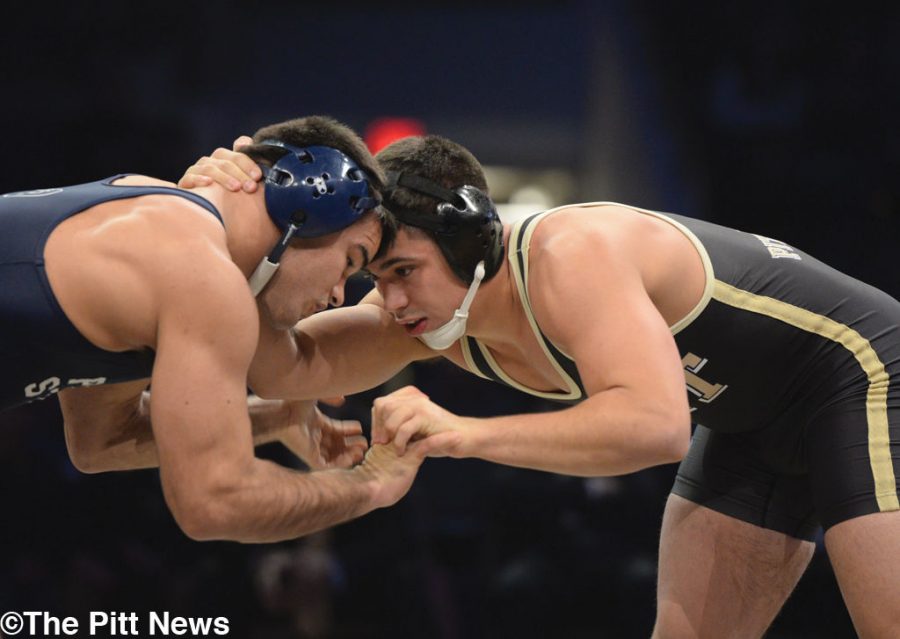 By Alex Fischbein and Brandon Duerr / The Pitt News Staff

Chuck Knoles, the head coach of Pitt’s swimming and diving team, picks up his phone. On the other line was Tony Galante, a sophomore diver, who requested off of practice to Knoles so he could work on a final project.

Normally this would be an issue, as missing practice in a varsity sport is generally disallowed. But finals week changes some priorities for players and coaches, as the week is packed with late nights, high stress, and —­for the student-athletes on campus — a tough balancing act between schoolwork and sports.

For one example, the swimming and diving team has the Christmas Meet from Dec. 11-14 to prepare for on top of finals.  As a result, some Pitt student-athletes must make some sacrifices during finals week and prioritize.

Many athletes use their sport as a sanctuary where they can let go of any worries or stress. Harris Bergman, a senior diver, uses these practices as a way to get away from all the stress that finals bring.

According to Berman, Knoles told the team to set aside time from 1:30 p.m. to 5 p.m. just for diving. But, outside of the pool, he still sees his academics as a competition.

“When I come to practice, I focus on becoming a better diver and how I’m going to beat people in the ACC. When I’m in the library or the Cathedral studying, I just look at the book and think, ‘Here’s how I can beat divers in the pool and out of the pool,’” Bergman said.

Schoolwork can become stressful, but working to become the best in your sport can also be taxing. When practices and schoolwork become a routine, however, remembering to find time to relax can be difficult.

Lauren Mills, a senior swimmer, said finding time to relax is key to avoiding overwhelming stress during finals. She said she likes to talk to her teammates, read a book or bake to relax.

“It’s easy to think I can go from practice to class to taking the exam, and keep doing that over again, but I have to remind myself every day to at least take a few minutes for myself and breathe,” Mills said.

Pitt wrestler Tyler Wilps, a redshirt senior captain, said the key to balancing the demands is focusing on the task at hand.

Wilps’ coaches make sure the players have the easiest schedule at the end of the semester, he said, in order to succeed in academics and athletics.

“Coaches understand and know when finals week is, so they try to schedule our matches in a way so they aren’t on top of each other,” he said.

Wilps has learned to manage his academics well enough that he is now receiving the Rande Stottlemyer Endowed Scholarship award for being the best student-athlete on the team. Stottlemyer was both Tyler’s and his father’s coach.

“I’m honored. He was a coach and a role model for me,” Wilps said.

“On the weekends, when other people are relaxing or out, we have to study, plain and simple,” he said.

Student-athletes are no exception when it comes to balancing and relieving stress in college. Finals and competing in a sport can carry equal amounts of stress, and Bonaccorsi added that budgeting time is the key to success during the semester’s toughest days.

“You know, the main thing is you got to study between classes and not wait around,” he said.