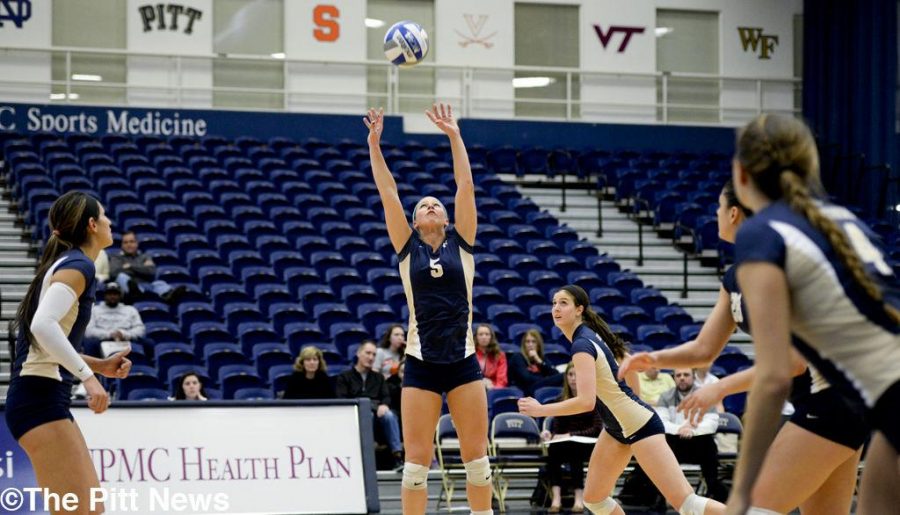 Pitt’s success earlier in the volleyball season disappeared this weekend when the team dropped both matches, a first this year. The Panthers fell to Miami 3-0 and Virginia Tech 3-1.

“There wasn’t an aspect of the game that we didn’t struggle with,” head coach Dan Fisher said.

Opposite Kate Yeazel was the only Panther to record double digit kills (12). Yeazel and outside hitter Genitsaridi, who had seven kills, tallied for more than half of Pitt’s 31 kills. Miami’s top player, outside hitter Savanah Leaf, tied Yeazel for a match-high 12 kills.

“We missed so many serves,” Genitsaridi said. “We are the best serving team in the ACC, and we didn’t use it.”

Fisher said Pitt’s defensive effort was one of the worst of the season.

“We were out-dug. For us to get out-dug, it’s pretty rare,” he said. “That is the most telling sign of how we played tonight.”

Pitt played to its opponent’s level early in set one, with the teams exchanging points often. It wasn’t until Miami took a 16-15 lead that the Panthers couldn’t recover. In set two, Miami took a commanding 10-5 lead that they never relinquished, and Pitt only came within four points. Pitt stayed close in set three until midway. With Miami holding a 12-11 lead, the Hurricanes ran off five straight points to take a 17-11 lead from which  Pitt could never recover.

Mechael Guess added 12 kills off the Panthers’ bench. Yeazel was the only other player to reach double-digit kills, with 10. Senior libero Delaney Clesen had a match-high 17 digs. Virginia Tech’s outside hitter Lindsey Owens and middle blocker/right side Kathryn Caine had 12 kills each.

Friday’s loss may have weighed on Pitt’s mind as the team allowed the Hokies (13-14, 6-8 ACC) to jump out to a 11-1 lead. The Panthers appeared to have set two under control until the very end. Pitt took back the lead at 17-16 and appeared on its way to a set victory. The Hokies came back from a three-point deficit to tie it at 23 and added two more to win.

“We talked about how we should come together as a team and figure it out on our own,” Guess said on the team’s game plan after dropping two sets.

After the intermission, the Panthers took a 6-1 lead that they held onto for the rest of the third set. Whatever momentum Pitt had disappeared in the fourth set. The Hokies scored six straight to break a 19-all tie and capture a match win.

“At the beginning, we were low energy, and we tried to turn that around,” sophomore middle blocker Jenna Potts said.

Potts added that the two straight losses for Pitt won’t have a negative impact on the team as it prepares for a split weekend against NC State and at Virginia.

“We’re going to have to let [losing two straight] motivate us to get better,” she said.