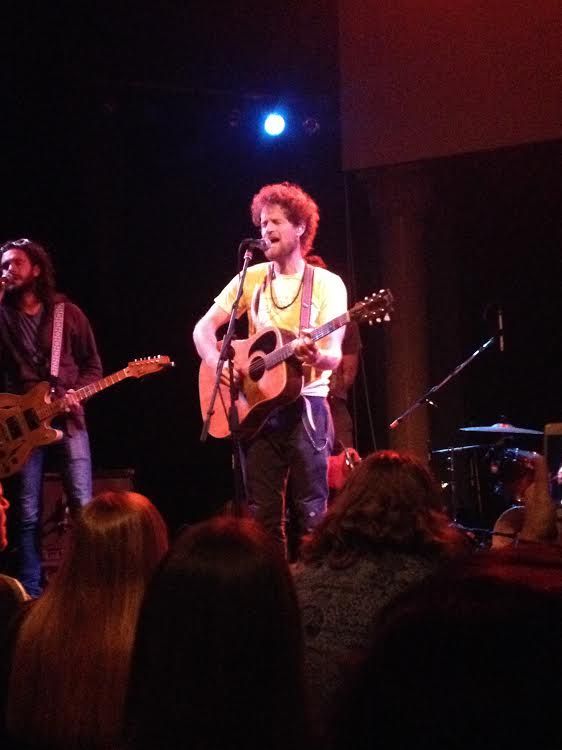 Midway through his set at Mr. Small’s Theater in Millvale, Pa., Chad Stokes asked a question that solidified why he loves Pittsburgh.

“Where else could you play to a crowd like this on a Monday night but Pittsburgh, Pennsylvania?”

Stokes is one of the lead singers and founding members of popular genre-proof group Dispatch, as well as the head of his side project, State Radio, a slightly more standard alternative-rock band with politically driven lyrics. But this current tour, which started Nov. 1 in Massachusetts, is promoting his second solo album, The Horse Comanche, which is due out in February.

The night began with opening act Ark Life, a Colorado-based folk rock group led by Jesse Elliott, an out-of-towner with his own Pittsburgh connections. Elliott is a former student and longtime friend of John Lyne, a Pitt professor of communication whom I met by chance in the crowd. Lyne taught and mentored Elliott while he was at the University of Iowa.

Ark Life played a 45-minute opening set that featured songs from their first album, The Dream of You and Me, as well as one cover — John Prine’s “Sweet Revenge.” Most of their original songs featured lyrics about love (“I need your love to get me through this”) and almost constant “ooos” and “ahhhs” by the three female background vocalists — who also played keys, electric guitar and bass.

The crowd Stokes referred to couldn’t have been more than 300 people (a Mr. Small’s representative estimated 250), but his electric energy made it seem like the show could have been at Consol Energy Center. Stokes set this tone early, opening with the first track of his new album, “Pine Needle Tea,” that features haunting harmonies over fast-paced noodling on acoustic guitar.

The rest of the concert featured a variety of songs from the new album and older solo songs, along with a few Dispatch and State Radio tunes worked into the mix — the latter of which seemed to please the crowd the most. One of the highlights included a performance of Dispatch’s most well-known song, “The General.” Known for its lyrically fast verses, longtime fans often pride themselves on knowing all the lyrics.

Stokes continued his performance with songs driven by politically charged lyrics more typical of State Radio. The new album’s fifth track, “Our Lives Our Time,” refers to the United States as the “United States of discrimination,” mirroring his earlier ideology with State Radio.

Similarly, he played one of State Radio’s more popular songs, “Camilo,” in the middle of the set. The liberal anthem is a response to the human rights controversy surrounding Camilo Mejia, a Nicaraguan-born U.S. Army officer who was charged with desertion after not returning to Iraq after his first six-month tour. He was then sentenced to one year in prison. His imprisonment outraged many, including human rights group Amnesty International, who declared Mejia a “prisoner of conscience” — a tag applied to anyone who has been imprisoned for the non-violent expression of their beliefs. The situation angered Stokes as well, and it prompted him to write the lyrics, “From another land’s war torn corners / To a prison cell in my own / Punish me for not taking your orders / But don’t lock me up for not leaving my home.”

Stokes allowed for some light moments by sharing an anecdote about playing in Mr. Small’s earlier in his career. He explained that nights after a show in the one-time church, the band would go on stage and jam in the middle of the night with no one else around. “It was really scary ’cause of all the priest stuff on the walls,” Stokes chuckled. He also implied that it was the bedroom upstairs in Mr. Small’s where his two-year-old daughter was conceived.

Stokes and his band put on an extremely entertaining show that featured a lot of audience involvement — at some points he let us sing entire verses. There was plenty of energy and a dialed-in frontman who spent much of the show with his eyes closed, feeling the music through his veins and vocal chords. Stokes also enjoyed interacting with the relatively small crowd, chatting with them between songs.

Stokes’ final song, after over an hour-and-a-half, 13-song set and two encore songs, was another classic Dispatch tune, “Elias.” After time spent living and teaching in Zimbabwe, Stokes wrote the song and also developed a charity, The Elias Fund, which helps give opportunities to Zimbabwean youth through community development and education.

As the liberal humanitarian musician sang the final “la la las” of “Elias” while strumming his acoustic guitar, Mr. Small’s was euphoric.