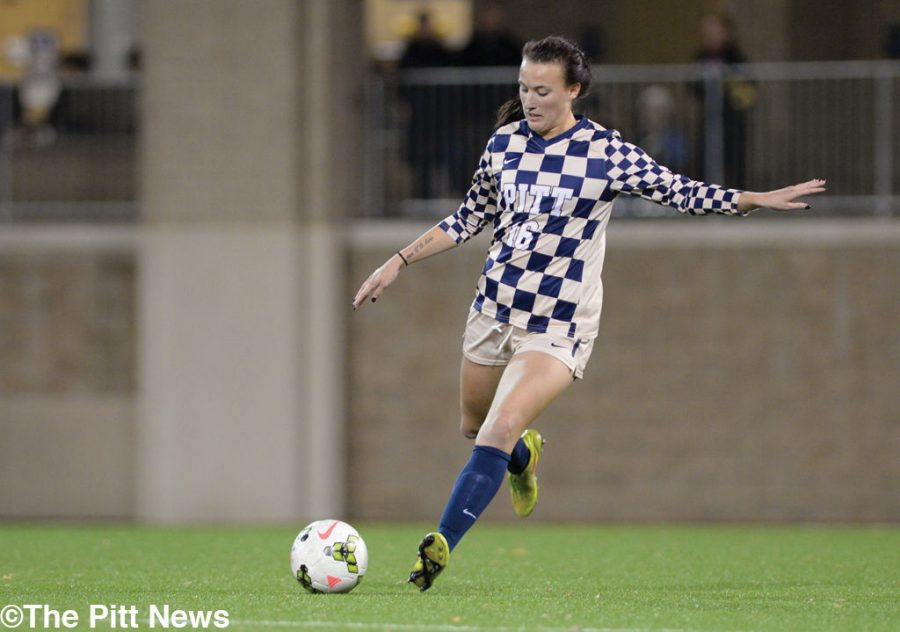 When dealing with youth, sometimes winning isn’t everything.

The Pitt women’s soccer team walked off the field in disappointment after suffering through a merciless 6-1 defeat at the hands of the No. 3 Virginia Cavaliers, but the Panthers know better than to hang their heads for long.

The Panthers were unable to attain their preseason goal of earning 11 victories and reaching postseason play — a target that was set over a year ago. It is true that, at times, Pitt was overwhelmingly frustrating to watch not only for fans, but also for the players and head coach Greg Miller.

With that said, their 6-12-0 record does not speak for what they truly accomplished in 2014.

“[Our goal of 11 wins] was intended to try and give our kids something to sink their teeth into,” Miller said. “It might have been a little bit out of our reach … but we just tried to have that be the big picture and then focus on all the things that were going to lead up to that.”

Pitt looked decent in the nonconference schedule, going 4-4-0 with a roster that consisted of 23 of 28 players who were freshmen or sophomores.

Lack of intensity early on in games is what killed Pitt through the middle portion of their season. They fell into a trend of getting down early and failing to give themselves a “fighting chance,” as Miller likes to call it, to win games.

For senior co-captain Jackie Poucel, it was the 3-0 loss to the Duke Blue Devils in mid-September that helped Pitt diagnose their issues.

“I definitely think we all looked back at that game and had feelings of regret,” Poucel said. “We could have played much better … it definitely made us realize we couldn’t just let [early goals] happen again, and we were determined to fight harder and last longer.”

After playing Boston College tough on the road in a losing effort, the Panthers earned their first ACC win in program history against Syracuse in a grind-it-out-type match, 1-0.

“[The ACC win] was huge,” Miller said. “It was a huge monkey off our back … I think it took a lot of pressure off of a whole lot of things and it just gave us the confidence we needed at that point.”

After defeating N.C. State on the road in the next contest to earn their second ACC victory, Pitt ended the season on a six-game losing streak in conference play with three of them coming to top-15 teams in Notre Dame, North Carolina and Florida State.

Sophomore co-captain and forward/midfielder Siobhan McDonough — who will assume a heavier leadership role in the absence of Jackie Poucel next season — took the end of 2014 as a learning experience.

“I hope the stretch of losses showed the team how hard playing in the ACC is,” McDonough said. “We made progress, won two league games and we were feeling good. League play is a grind, though, and, towards the end, I think we lost some of our focus. [The losing streak] taught us that we need to be focused, hungry and prepared every time we step on the field.”

Pitt was picked to finish last in the ACC in the preseason coaches’ poll. Behind their two ACC wins, the Panthers finished just above the N.C. State Wolfpack – who finished their season winless in conference play – which was good enough for 13th overall.

“I think we’re in the bottom tier [of the ACC],” Miller said. “In this conference, you’ve got to be prepared for every single game … I just don’t feel like we put as much value in every single game, especially down towards the end of the season.”

Having said that, Miller cannot deny the fact that his program is finally beginning to mold into something with which he can work.

“Looking back on the season, I’m more pleased than I am disappointed,” Miller said. “Being patient, at times for me, was hard, but you’ve got to look back on it and say that we did make a good amount of progress with a pretty aggressive schedule. I’m excited about the future.”

Miller and Pitt’s returning players will face the offseason as a time to work on their individual skills, as well as forming a more committed, responsible group at the team’s core.

Before departing, Poucel had some words of advice for her former teammates.

“They have to learn to just be better,” she said. “They have to learn mental toughness and how to push through the tough times and score goals. They need to know that they can win games, even the tough ones. They have to realize that, even if another team is all around more technical or more athletic, the hardest working team can win, and they need to learn how to be that type of team.”